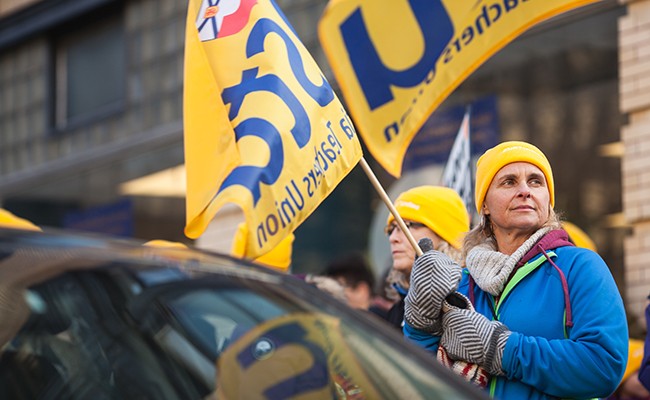 In the fall of 2016, armed with only a $95 budget, a few social media accounts and a passion for public education, Halifax-raised mom Jennifer Raven beat out incumbent Steve Warburton for the South Shore/Bedford seat on the Halifax Regional School Board.

"It was kind of a dare," Raven recalls. "I'm a single mom. I'm recovering from breast cancer and I hadn't worked a number of years. But I created a social media campaign, I spent $95 on business cards and my running joke is that I beat an incumbent by more votes than Al Gore lost to W. Bush."

It was a passion for the small rural schools she felt were being overlooked in her community and a dedication to seeing in the system that led Raven to run for the board, and 18 months into a four-year term, change is happening.

Raven recently put forward a motion that led to the first report on racism and discrimination in Halifax schools. Another of her motions made Mi'kmaq land acknowledgements part of daily life for students in the HRSB.

Now Raven is afraid the progress she's made, like that of many others, will be cut short with little warning.

The province is planning to eliminate the HRSB, along with the six other English-speaking school boards, as part of sweeping education reforms rushed to the legislature.

The elimination of the school boards is one of 22 recommendations for administrative change put forward by Ontario-based consultant Avis Glaze in her recent review of Nova Scotia's education system. The "Raise the Bar" report also suggests removing principals and vice-principals from the teachers union and the creation of a Provincial College of Educators to regulate teacher quality.

In a press release the day after the report was released, Education minister Zach Churchill accepted all 22 recommendations, stirring up controversy among parents, teachers, board members and other community groups who have felt left out of the conversation.

Teachers and school board representatives have spent the past month denouncing the government's decision to forge ahead with its changes without more consultation.

Still, the province seems reluctant to press pause on the project. Productive last-minute talks this week between the Nova Scotia Teachers Union and premier Stephen McNeil have perhaps stayed the executioner's axe for now, but the uproar amongst stakeholders in Nova Scotia's education system remains.

The province only announced its Education System Administrative Review last October. Avis Glaze, formerly Ontario's royal commissioner on education and senior advisor to Ontario's minister of Education, was paid $75,000 to conduct the review and report back to the province by the end of the year.

In a whirlwind three weeks, Glaze held 91 consultations with different stakeholder groups and received 1,500 responses to an online survey.

Based on these consultations and her own research, Glaze compiled a series of recommendations intended to streamline Nova Scotia's school system by getting rid of the "silos" between the eight elected school boards and the department.

The report was submitted internally on December 29, but not shared with teachers, board members or the public until a press conference on January 23. The following day, Churchill announced he'd be accepting all of Glaze's recommendations, and prioritizing administrative changes like eliminating schools boards and removing principals from the Nova Scotia Teachers Union.

The NSTU and the Nova Scotia School Boards Association (NSSBA) denounced the decision that same day. A week later, the NSTU walked away from the province's Council to Improve Classroom Conditions. Later that same month its members voted in favour of an illegal strike.

All this has happened at breakneck speed. The Glaze Report has become a flashpoint of debate and mistrust between the of Education and the province's educators.

Teachers, parents, school board representatives and community groups have all taken steps to push back against the implementation of the report, and most want to slow down and talk things over before charging ahead with reform.

"If you have looking at the government and saying, 'Man you've got to slow this freight train down. This is not going to end well.' At some point, the government has to start listening," says teacher and education writer Grant Frost. "Responsible government kind of mandates that if you get this kind of pushback, at least press the pause button."

One of the loudest critics of the province's reforms is the NSSBA, which has been fighting the swift elimination of Nova Scotia's seven English-language elected school boards.

Glaze's report instead proposes a system of local School Advisory Councils overseen by the seven regional education offices. These offices would be led by the former superintendents, now named regional executive directors. This change would require adjustments to the Education and would eliminate 79 democratically elected positions.

"We thought they might amalgamate some of the school boards," says Raven. "Nobody expected they would completely eliminate democratically elected school boards."

The NSSBA submitted a response to the report outlining concerns with the review process, stating via press release that important information provided to Glaze "was either not read or consciously ignored in the report."


"Responsible government kind of mandates that if you get this kind of pushback, at least press the pause button." tweet this

The school board association also assembled five years' worth of NSSBA resolutions calling for some of the same systemic improvements addressed in the Glaze Report.

"It's ironic that some of the recommendations in this report, school boards have been asking for for years and years and years, and the Department of Education has ignored us," says Raven.

The school board member also questions how the elimination of the elected bodies will bring positive change for students.

The financial reinvestment is only a drop in the bucket. Cutting the elected boards would save the province $1.3 million in stipends, but that's less than one percent of the department's $1.2 billion school board budget.

"No one from the government seems to be able to provide any clear answer or evidence-based response on how any of these changes can directly be traced to an improvement in the classroom to student achievement, which is supposed to be the goal of system change," says Raven.

"If you're going to change the education system, first off, you should know the changes should at least be something we can hang our hat on and say, 'This is going to be positive for the kids.' This report really doesn't seem to have anything in it that's good for kids."

A major concern of both school boards and the teachers union has been the lack of consultation between the government and other stakeholders in the education overhaul.

The Education System Administrative Review called for an interim report from Glaze due in November. It never came.

The Council to Improve Classroom Conditions, borne out of last year's labour struggle, was set to review the Glaze Report before it was announced. It never happened.

Though Glaze cites consultations with nearly 500 people, many groups feel their voices have been left out of the education reform process.

Karen Hudson, president of Black Educators Association, which represents the interests of African Nova Scotian learners and educators, says they were not asked for input into Glaze's report, despite being referenced in her list of consultations.

Likewise, the NSTU feels cut out from the process. Union member Paul Wozney says Glaze met "in a nominal sense" with NSTU representatives, "but functionally those people do not represent NSTU interests."

Members of the NSTU have suggested the auditor general review Glaze's recommendations before implementation, and have asked the government to pause for more consultation.

"Some of the criticisms about this report are based on the fact that there is no trust between these two groups," says Frost, who is the president of his local NSTU chapter. "If you want to try to build that trust, send the report to a third party and then let them have a look at the recommendations."

Further straining that trust is how closely Glaze's recommendations echo findings from the Freeman report, which was conducted by the Minister's Panel on Education in 2014.

The Freeman report recommended a new system for upholding teacher excellence, much like Glaze's College of Educators, as well as a recommendation to "consider if supervisory staff—including principals, supervisors, directors and superintendents of school boards—should be members of the same union as teachers."

The Glaze Report also seems to mirror a motion quietly passed at the 2016 Liberal Party AGM calling for "immediate action to eliminate our present English language school boards and replace them with a single provincial school board."

No conversations on the resolution were held until the release and approval of Glaze's report nearly two years later. But given the similarity to previous Liberal proposals, the rush to implement new policy now is leading some to question whose interests the of Education has in mind.

"There doesn't seem to be any buy-in from anybody except for the Liberal government," says Frost. "That in itself should raise some eyebrows in the general public, that for the first time in an awfully long time, everybody's coming up and saying this is a really bad idea—except for the government."

The increasing distrust and continued lack of collaboration have pushed the NSTU to vote for an illegal strike action. Ninety-three percent of the NSTU's members participated in the vote last week and 82.5 percent were in favour of illegal job action, despite the financial risks. The union could face a fine up to $10,000, and $300 per strike day, for breaking the Nova Scotia's Teachers' Collective Bargaining Act. Individual teachers could face fines up to $1,000.

Still, teachers think enough is finally enough. The pressure is on for the government to back down from legislating the Glaze report's recommendations, and it may be working.

Teachers union president Doucet had several closed-door meetings with Churchill and premier McNeil over the past week. Both sides are staying tight-lipped about details, but there appears to be a new spirit of compromise.

"I don't know if we'll get to where everyone wants to be, but I do believe there's always room for compromise in that," McNeil told reporters this week after meeting with Doucet. The premier also promised to hold off on proposed Education Act amendments, instead of tabling that legislation on day one of the spring session, as had been expected, and rushing it into law by the end of March.

Both sides, in one way or another, care about student achievement, says Raven. But everyone has a different perspective on what that looks like.

"That doesn't mean one perspective is more valid than another, but it means we should be talking to each other about all of those viewpoints," she says.

While the NSTU and the province hash things out, the school boards' work remains limited.

A letter from Churchill sent to the mandates that ministerial permission is needed during the current transition period before "the approval of any new school board policies, entering agreements, or making substantive changes, including decisions on transportation, finance, operations and staffing."

The minister's letter reminds elected board members that, if these directives are not met, the Education Act gives him the power to strip responsibility and authority from the school boards and appoint someone else to fulfil their role instead.

"I believe with all my heart our board was doing good work and was high-functioning and cohesive and had the best interests of our students in mind, and addressing a lot of the concerns that the government says they need to get rid of us in order to address," says Raven.

"It doesn't make any sense."

Julia-Simone Rutgers is a journalism student at the University of King's College and an outspoken advocate for racial justice. You can find her on Twitter @jsrutgers