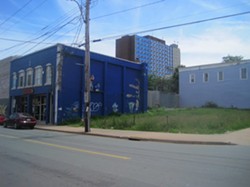 The operators of the Metro Turning Point homeless shelter are planning to build a four-storey transitional housing project on Gottingen Street, at the corner of Cunard, on what is now an empty lot next to the Company House bar.

Ross Cantwell, who is the brain behind several other Gottingen-area projects, says he has been working with the Saint Leonard's Society, which runs Turning Point. "They received some funding [from the federal government] to create supportive housing for the homeless," he explains.

"The whole idea is that if you go to a homeless shelter, some of the people that are there have hit a rough patch, and they're there for a night, a week, then they get their lives back on track. Unfortunately, there's another portion of that population that is just chronically homeless---they just live in a shelter."

Experience has shown that intervention in the chronically homeless' situation---outright providing housing---is far more effective both financially and in terms of helping change lives, than is providing lots of social services to people in shelters.

The Gottingen building will have 18 one-bedroom apartments (six on each of the upper three floors), with a full-time manager/social worker living on site. The ground floor will consist of retail space, which could be broken into up to three units. Cantwell thinks some the retail operations could provide job training for the residents. Cantwell expects construction will start by fall.