How To Make The Most Of A Overly Delightful Situation

The new face of Sappyfest, brought to you by Chris Foster. 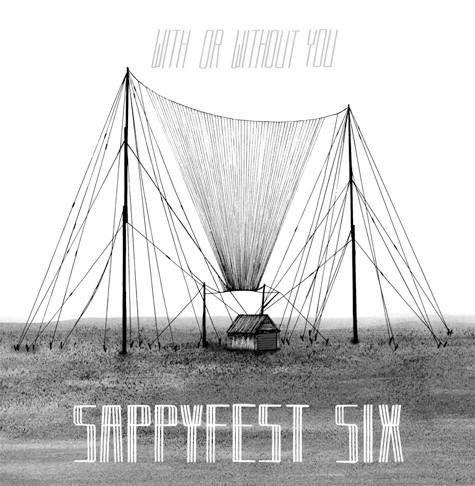 It's that time of year again. Each summer, I look forward to it like the return of an old friend. Sappyfest is not your typical music festival; not quite a quaint folk festival, hardly a exhausting extravaganza. It's really just a very special time and place. Musicians, both big and should-be-big, gather in Sackville, New Brunswick, along with food vendors, crafters, zine-makers, readers and just about every other lovely kind of person you can think of, to celebrate independent art and music and the freedom that small town maritime living affords.

Thanks to the adorable size of Sackville and the wonderful folks at Sappy, the number of time conflicts are rather low, however, there are choices to make. To see it all is impossible and here is my plan on how to have the most fun ever, in one weekend (again):

Day 1:
Arrival today leaves my with only one option: the mainstage tent show runs from 6pm until midnight. There are 4 acts in total, and two of particular interest. I am excited to see the mysterious, beautiful looking man they call Daniel Romano; last year the festival was a-buzz with his name and I foolishly opted not to see his set his Fred Squire and Julie Doiron, which was apparently a highlight for every other person at the festival. Closing the night will be Owen Pallet who is probably the biggest name on the bill this year. Familiar to many as a solo artist (once known as Final Fantasy), he will be performing with his old group Les Mouches. Decidedly more obtuse and much lesser-known than his solo work, it will be interesting to see how this one plays out.

Then it's off to the Royal Canadian Legion to catch hometown heroes Long Weekends pump through what is sure to be another solid set of slowed down power-pop. Closers for that show, the Attack in Black offshoot Marine Dreams, should provide the perfect comedown to a well earned first day: melodic, carefully-crafted rock songs of the highest order.

Day 2:
After waking up on a friends couch, getting a greasy meal and feeling like I never want to drink a Picaroons again, I plan on sauntering down to city center and catching some readings in the Community Garden at 1pm by Mischa Bower (who blew my mind two years ago with a reading at the Vogue Theatre) and Lindsay Bird. By then, it'll probably be time for a Picaroons and off I'll go to The Craft Fair on Bridge Street and The Zine Fair at the legion, where, if you're lucky (or if you just time it right), you can catch budding novelist and Coast contributor Jenner Brooke-Berger reading her insightful, sensual work.

After all that is said and done and the hangover clears up and I feel fit to move a little faster, I'll be hoping to catch the always-endearing Klarka Weinwurm and her dashing hubby Jon McKiel performing at Uncle Larry's around 5:30pm. Following that, it'll be a quick hop/skip and or jump up to the Vogue Theatre to catch another big name at the festival, Sandro Perri.

After that my body will probably demand that I eat something nourishing, so I'll compromise with it and grab a tiny cheeseburger platter from Mel's Diner. Then the Main Tent will have my attention until midnight with the strongest single line-up of the festival. Performers include: Weakerthan's frontman and wordsmith John K. Samson, spectacle-and-addictive-hook-maker's Apollo Ghosts, party starter's/best dressed band Bonjay, and then what is unquestionably the most anticipated performance this year (and maybe ever in my many Sappy experiences) the screaming eagle of soul, Charles Bradley!

Afterwords, I'll wipe away the tears of joy, hug all my closest friends ecstatically and head for the Royal Canadian Legion for the late night show with Wooden Wives and Mantler.

Pressing on relentlessly, I'll rise in a stupor and head for the Town Band Stand at noon to see Lil' Andy belt out his rich brand of Americana (admittedly, rarely do I think this music is a good idea in the present tense, but Lil' Andy's got it going on). Then it'll be a dash to the Main Tent to catch Halifax's hungriest, handsomest three-piece, the unparalleled Quaker Parents sometime after 2pm. Following them at the tent is the alluring jazz of Drumheller and the mystical beauty of Jennifer Castle (who stole my heart at the first or second Sappyfest, hopefully she brings it with her).

With a little bit of breathing room, I will rest for a moment, send all that City Mail that I'd been meaning to send all weekend, have another drink or two (and food from one of the vendors, if time permits), then back into the thick of the Main Tent for another doozey: Dirty Projector's bass player Nat Baldwin, who I think will be the secret winner of the festival, King of Kreuzberg and all-around swell fella Shotgun Jimmie, stalwart West Coast rockers Ladyhawk and the inimitable Chad VanGaalen.

Finally, being swept up in the madness and drunk on the communal love and whimsy brought on by a hot Sunday, I'll swagger to Uncle Larry's for a blast of electro with up-and-comer Grimes and the biggest little freakshow in the Canadian underground, Cecil Frena's Gobble Gobble. If you think a bunch of dudes in feathers and hockey gear banging on frying pans and performing synchronized dancing routines isn't enough to entice you, believe me when I say that the gimmicks are above and beyond the call of duty, their songs are fantastic in their own right.

So that's it. That's my big plan this year.

How much of this will come true? Will I get lost in the expansive marshlands or coerced to party on in a vacant lot? Will I sleep through an event at noon? Will Sappy burn at it's brightest with more of their patented late-night super secret surprise shows? How many times can one reporter use the term 'loveliest' or is it proper to use the term 'the bestest' in print?

I suppose you'll have to come and discover the Swamp Magic for yourself to be sure.