The final installment of Mat & Dave's Trip to Sappyfest in Sackville, NB.

Sunday at Sappy had a slow start, we were pretty partied out after Saturday's hijinx. I was pretty impressed when we spotted a group of musicians and volunteers playing baseball at 10:30; we thought about stopping by and hitting some dingers but we decided to skip out on the action and head to the performers' brunch. No other festival treats musicians as well Sappy does, they pay well, they give performers a pass for the entire weekend and they also provide a musicians' free brunch and dinner every day of the festival. The Sunday brunch took place in the university president's house. We were served croissantwiches, fruit cups and danishes. After grabbing grub we headed down to the mainstage to catch Jon McKiel, Julie Fader, The Luyas and Shotgun Jimmie.

Jon McKiel played a mix of haunting ukulele ballads and stoner rock sludge; it was a pretty memorable performance and brought the crowd into the tent. Julie Fader, who sings back up for the likes of Sarah Harmer and Chad VanGaalen, played a set of sweet country-infused folk pop that went over big with the growing crowd. The Luyas, fronted by former SS Cardiac Jessie Stein, brought the indie rock edge back to the stage, they turned up the volume and picked up the pace a bit and it helped prepare the crowd for home town hero Shotgun Jimmie. Jimmie was backed by Sappy favorites Attack in Black and they tore through a set of songs from his new album Still Jimmie along with some classic Jimmie hits. 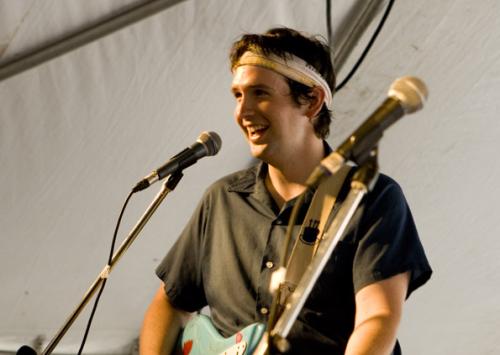 After Jim's set the mainstage shut down for a few hours and the audience had the choice of seeing Calvin Johnston and Destroyer at the church, or Timber Timbre at the Vogue Theater; we decided to check out the Destroyer show. Calvin Johnston charmed the crowd with a set the was one part music, one part performance art and one party comedy. The church crowd ate it up. 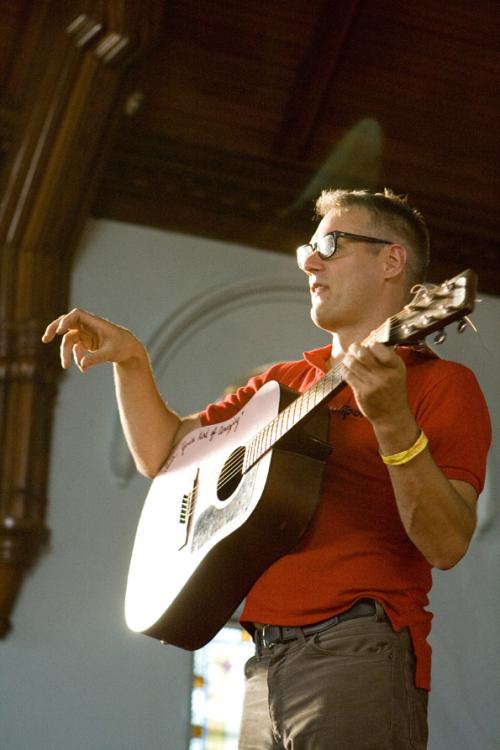 Destroyer didn't have the banter of Calvin Johnston on his side, and he was obviously affected by the scorching temperature of the church, but he's got such an amazing voice the show was still great. Everyone in the crowd left in awe of his interestingly crafted songs. 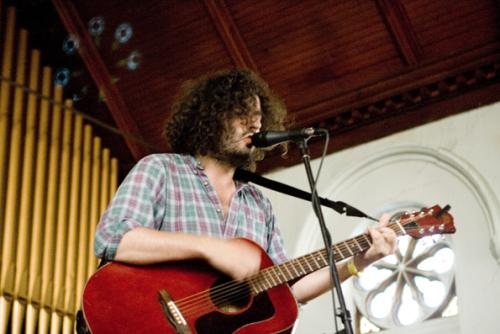 Destroyer, Destroying the crowd at the church

The bill at the tent stage on Sunday night was pretty heavy. People were back in party mode and we helped B.A. Johnston whip up some heart attack dawgs at "super weinnie hut juniors" AKA B.A's BBQ. Clues from Montreal started things off with a set of aggressive set of big beat indie punk. The band features former members of the Unicorns and Thundrah. I saw a lot of "hip kids" walking around with their vinyl after they finished their set up. 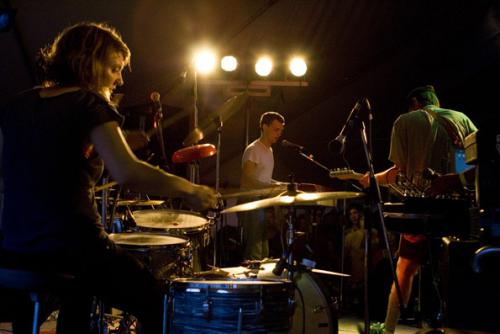 Julie Doiron followed them up with what many called the best Julie set ever. Julie had been on stage all weekend playing in a million bands but their was no lack of energy in her set. 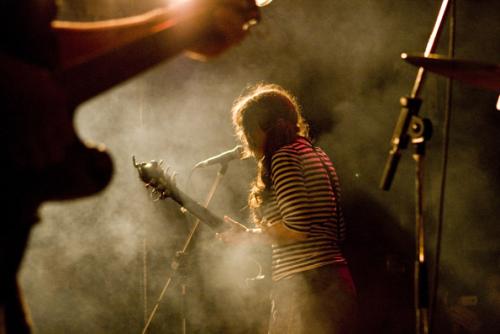 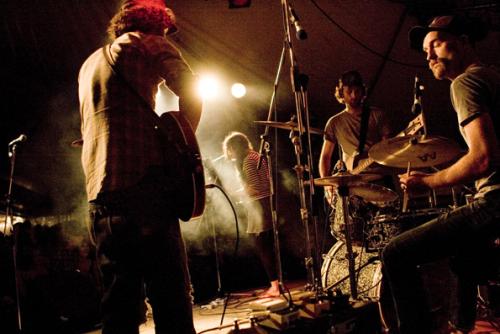 Attack in Black kicked so much ass during Sappyfest 2008 that everyone was pretty pumped up to see them kick out the jamz again this year. 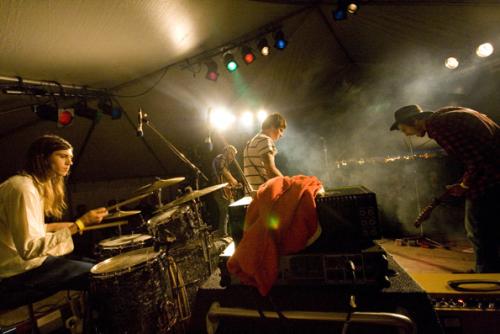 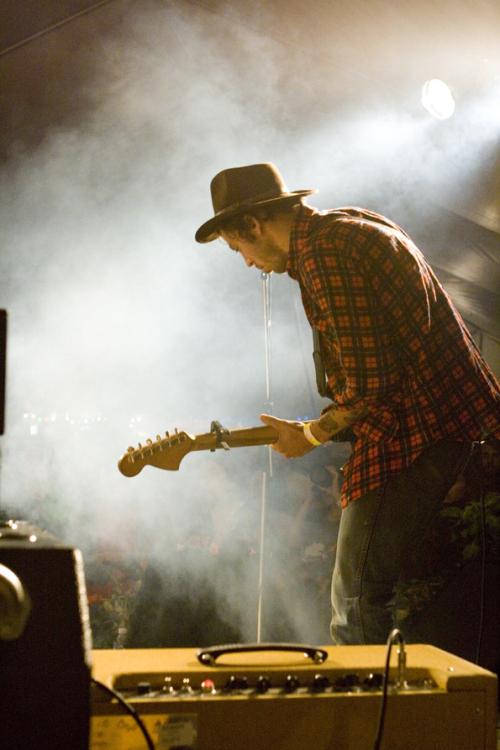 Attack in Black setting the stage on fire

Wintersleep was hella loud, tight and really rocked the crap out of that stage. 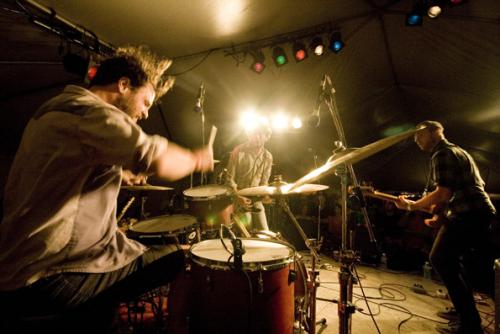 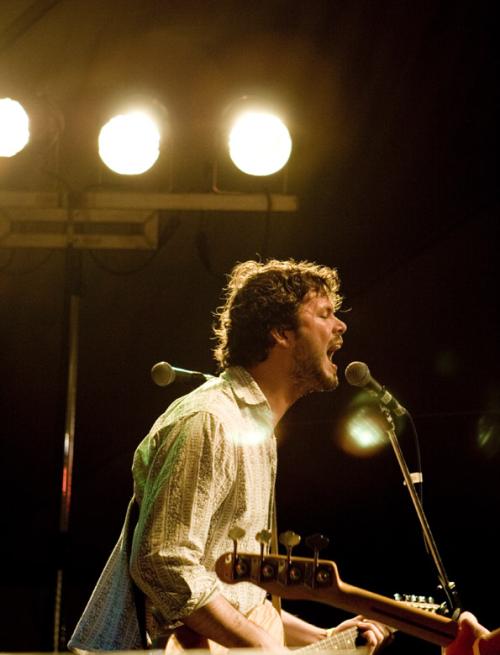 After the main tent shut down a secret show that everyone was talking about was happening at George's Roadhouse. Members of the Constantines, Ladyhawk and 100 Dollars played Neil Young covers under the name Horseycraze. It was a fitting end to the weekend of music. The overpacked bar went crazy as they jammed out such Neil classics as "Revolution Blues," "Everybody Knows This Is Nowhere," "Cortex the Killer," and many more. 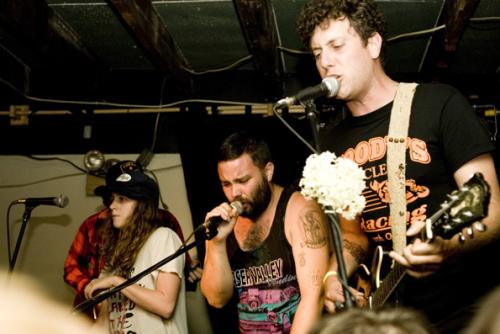 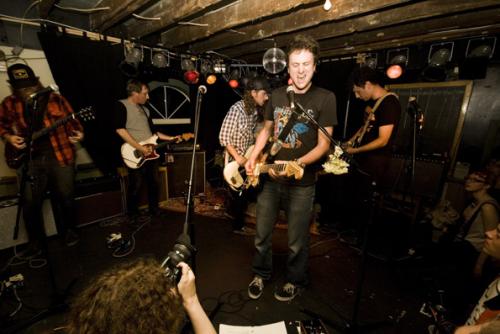 As the Horseycraze show wrapped up we ran quickly back down to Uncle Larry's billiards hall to catch the last half of a set by The Magic. We had been very excited to catch this band made up of an all-star cast of members from such bands as The Barmitzvah Borthers, Islands, The D'urbervilles, and more. They didn't disappoint. They had the crowd pretty hot for them (see photo below). 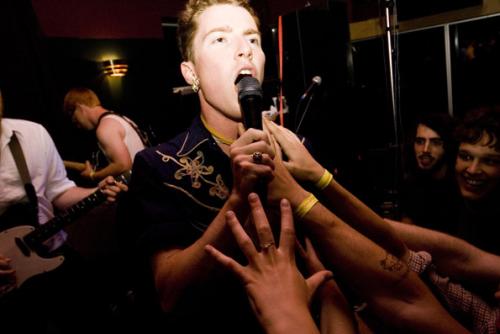 The crowd really just couldn't get enough of The Magic

At the end of the night some went back to their tents and some went back to Shotgun Jimmie farm for a bonfire and some laughs and one last chance to hang with all the great dudes at the festival. All and all it was a wonderful weekend with no negativity. The organizers of Sappyfest have really got it down.