SappyFest VIII: You were perfect

SappyFest 8. This year, they said don’t get your hopes up. But I was so excited to see the wind turbines that, by the time we hit Sackville, New Brunswick, I was using my outside voice in the car. Hopes were rebelliously high for the sweetest, most intimate music festival in Canada. And Sappyfest, the joke’s on you: you were perfect. Mel’s Tea Room, hangover sausages, pool hall cheap shots, Picaroons, it was all there. Also there: my all-time favourite bands, my new favourite bands, my best pals, the best weather and no doubt the best weekend of the summer.

We got to Sackville a few hours late on Friday and set up our tents at a bee farm off Bridge Street as the Joel Plaskett Emergency kicked it off. I heard the last few songs but my biggest regret was missing this one. Joel burned down the house. Big solos and his general, incredible rock and roll energy. And Dave Marsh and Chris Pennell held it all up like two power pillars.   Friday night was a blast and a blur. Pat Jordache (pop-dance party), Doldrums (amazing) and Chain & The Gang (peculiar, intriguing) rocked the main tent as I wove between food trucks, beer tokens and lots of great people. I walked in on a guy having a pee and traded a cigarette for a beer (Sappy score, schwing!). Then, on top of all the cool music, a Halifax-style comedy show. 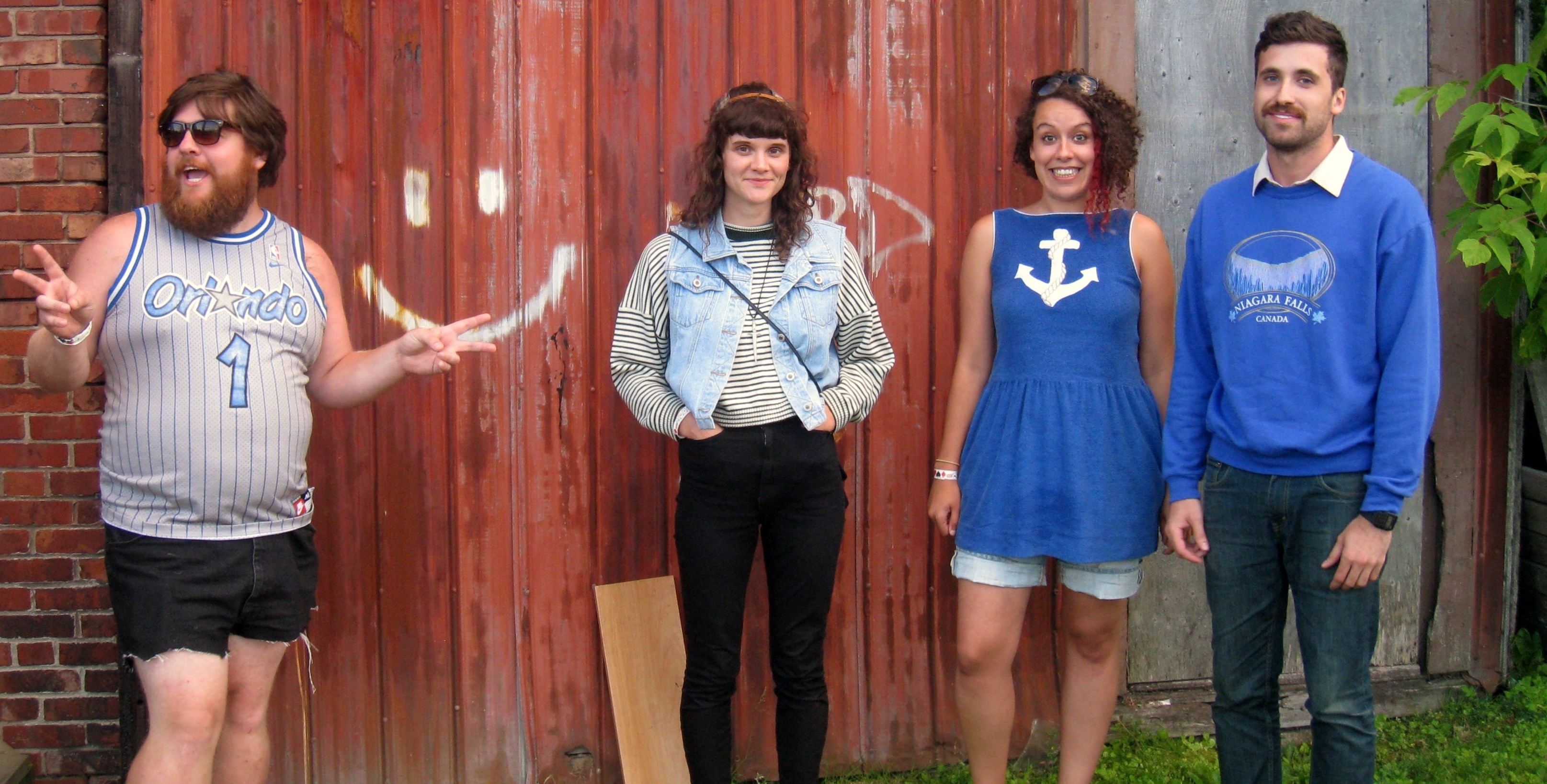 At 12:30am, our local comics did a pretty great job getting some laughs from a pool hall of party people. Hosted by the always hilarious Paul Doucette, we heard Everardo’s dry humour and Megan’s real talk. And then Cheryl Hann absolutely nailed it, pulling an entire rowdy room into her sardonic wit-world. After that, all I remember is tequila, a junkyard, The Cure and the cops. It should be noted: Paul said some really funny stuff all weekend that I wish I wrote down. 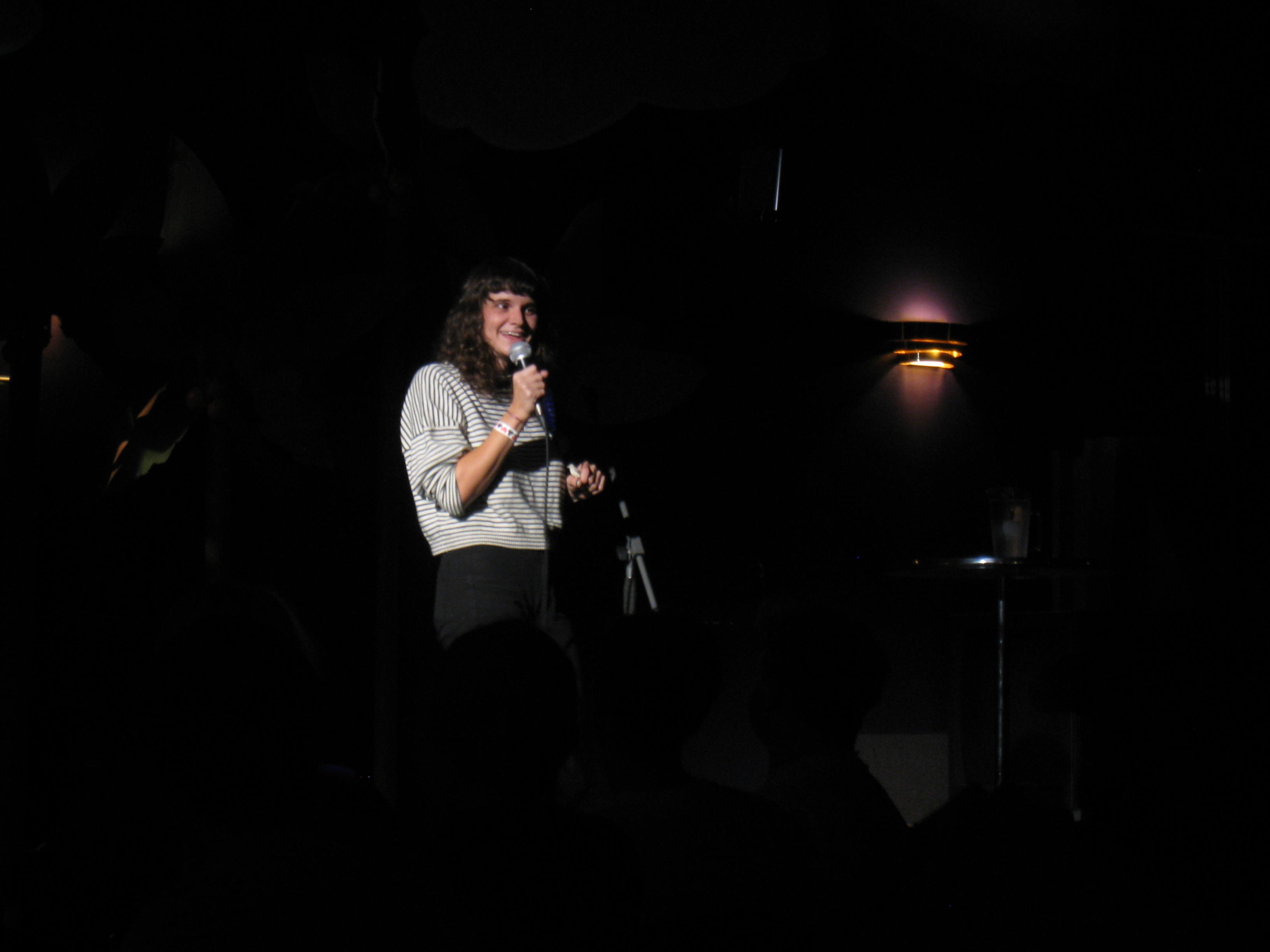 Sackville is beautiful at sunrise. We went down to Bridge Street because I needed a sausage and I sat dazed at the world for a couple of hours. Sappyfest attracts a lot of beautiful people and I ogled without shame. YOU DID TOO, so don’t even. Also, an abundance of gorgeous dogs. 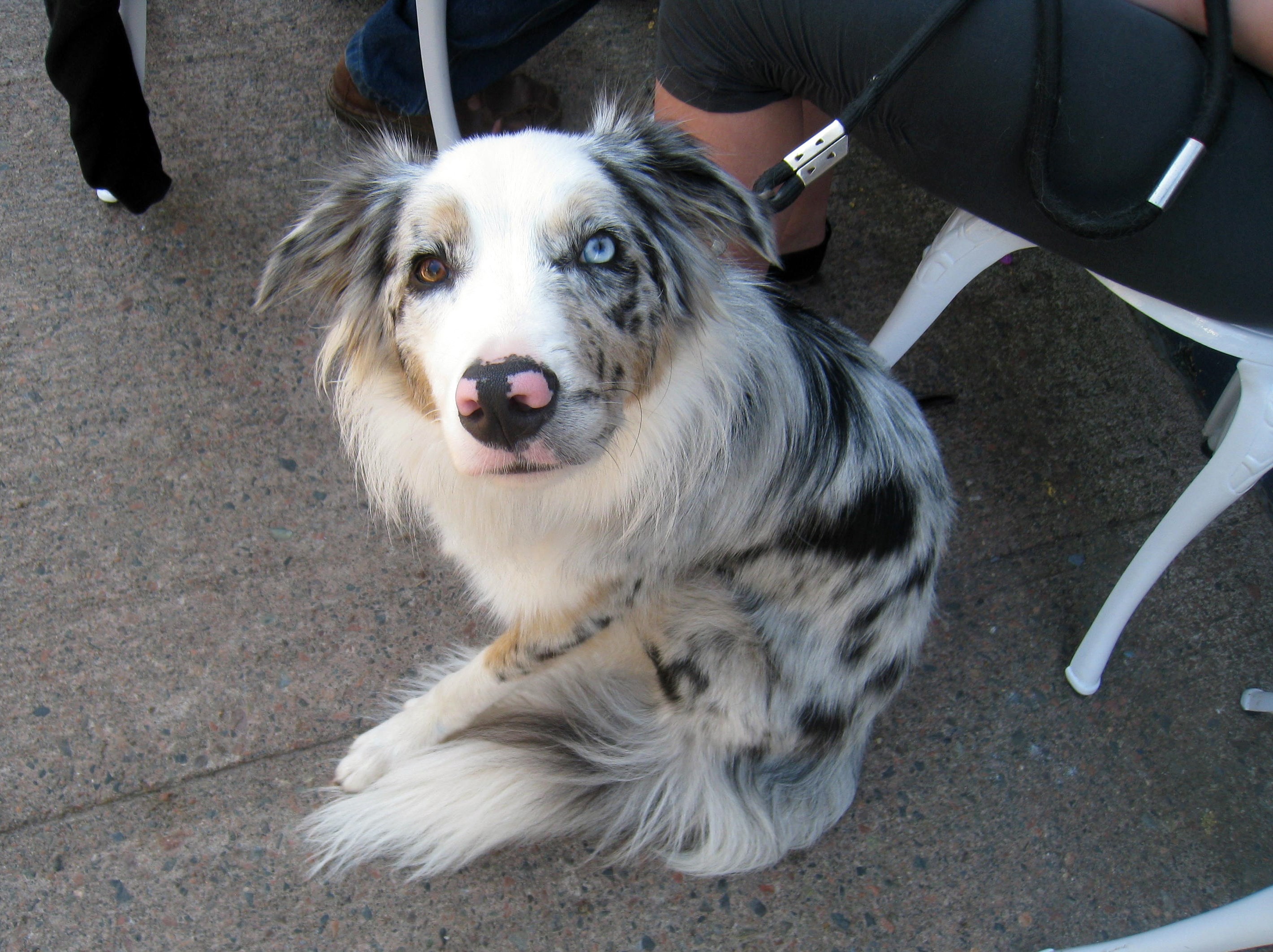 By noon, I was coming around and we hit up the SappyFest Zine Fair, featuring works by Conundrum Press, Rebecca Roher Art and so many talented others. I was also just in time for Universal Dawn at The Vogue Theatre with readings by Andrew Patterson and Jenner Berger and tunes by Grey Kingdom. Blue eyes, red beard: you got yourself a folk-country sweetheart.

I ran into Pat LePoidevin at the new location of Ducky’s Pub, right on Bridge Street. Pat spent most of the weekend at Sappy’s Kid’s Corner for all the mini music lovers, and his calm set on Sunday afternoon kicked off his Canadian tour for his new album American Fiction (August 27).

Saturday kept chugging along. And by "Saturday," I mean "me." The Picaroons beer was flowing. My favourite brew is the Best Bitter, although Secret Show is refreshing. After a bunch of those, I found this doggy by the market vendors and look at his face. JUST LOOK AT IT.

The Royal Canadian Legion filled up around 5pm for Halifax’s Old & Weird, starting Saturday night off pretty perfectly. The band’s drummer Sandi Rankaduwa has been in Chicago at the Improv Olympics, so Danika Vandersteen and Allison Higgins took turns on the drums, with Morgan “No Problem” Dowler hitting the skins for two songs. Danika gave props, though: “Everything we know about drums, we learned from Sandi.” Still, there was a lot of strength and sound was tight. Hannah Guinan’s vocals were excellent. Old & Weird played 14 songs, most of which haven’t been released yet, plus this summer’s favourite, “Judy Cool,” with its catchy, heavy bassline that actually blew my speakers last week. People really loved them. Old & Weird was the talk of the town. Also, there’s a Chicken Dinner next week at the Legion.

I bumped into Sappy regular Chad VanGaalen at The Salvation Army earlier that day as he rummaged through the women’s section. He closed out Saturday with the most compelling and genuine performance of the festival. Chad’s set was so sincere and honest, I don’t think anyone saw it coming. “I wrote this song for my dog, Lila, who died three days ago,” he said, playing a ballad that moved me to tears. As did “Sara” and “City of Electric Light.” He was called out hardcore for an encore and started playing “Chronograph #1” but, hearing a voice singing from side-stage, Chad asked Shotgun Jimmie to join him. Dream duet. Did I die? Heaven was a place. Interestingly, Chad is known for his vulgarity (although nary a dick joke in sight this year) but a musician like Chad VanGaalen is complete: only someone that beautiful can be so filthy.

Earlier, we went to the nearby lake for a quick afternoon dip and luckily, Shotgun Jimmie was on duty. No surprise there since Jimmie’s songs are little life-rafts that keep you afloat in the roughest of storms. You know: “When you’re waist-deep in the water, it sure is hard to run.” 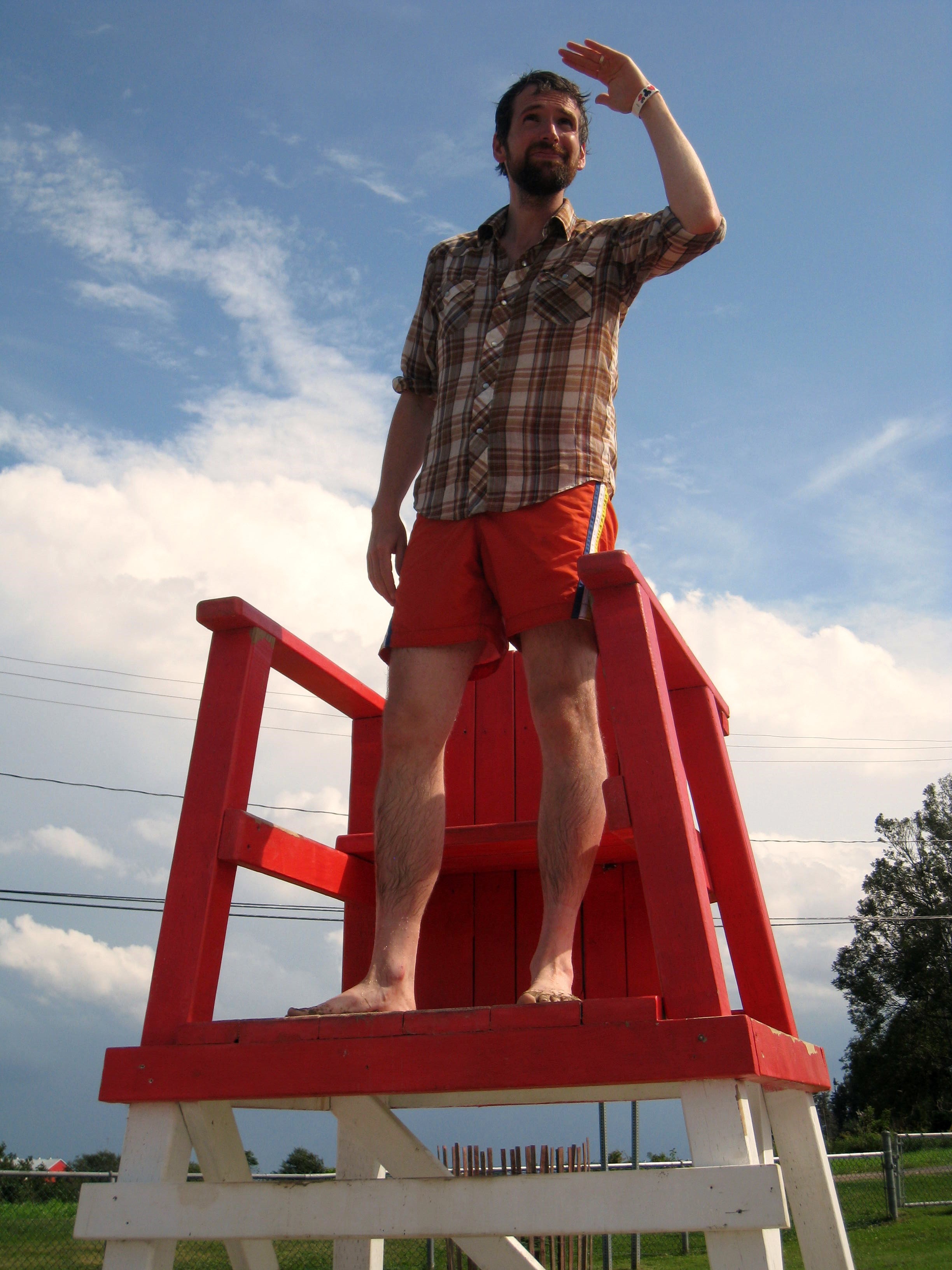 Between sets, my bud Matt Whiston said Shotgun Jimmie is the King of indie-rock. I have to agree. Sappy’s Paul Henderson introduced Jimmie with so much heart, “He’s help build this festival right from the start.” The best part of Jimmie’s show is that I never know who’s having more fun: Jimmie or the crowd. Because: he is a poet and joker and one of the most generous musicians. He played “Standing in a Line” from Everything, Everything, whipped out a seamless transition from “Bridge Street Stage” to “Suzy,” goofed through a lounge version of “Skype Date,” and threw down my faves, “Used Parts,” “Swamp Magic,” and “Late Last Year.” Oh man, it was perfect, especially with Cannon Bros’ Cole Woods on drums and Jay Baird (!) on bass. Unsung, lifelong hero? Probably, though he’d probably never say that, which is why he rules. 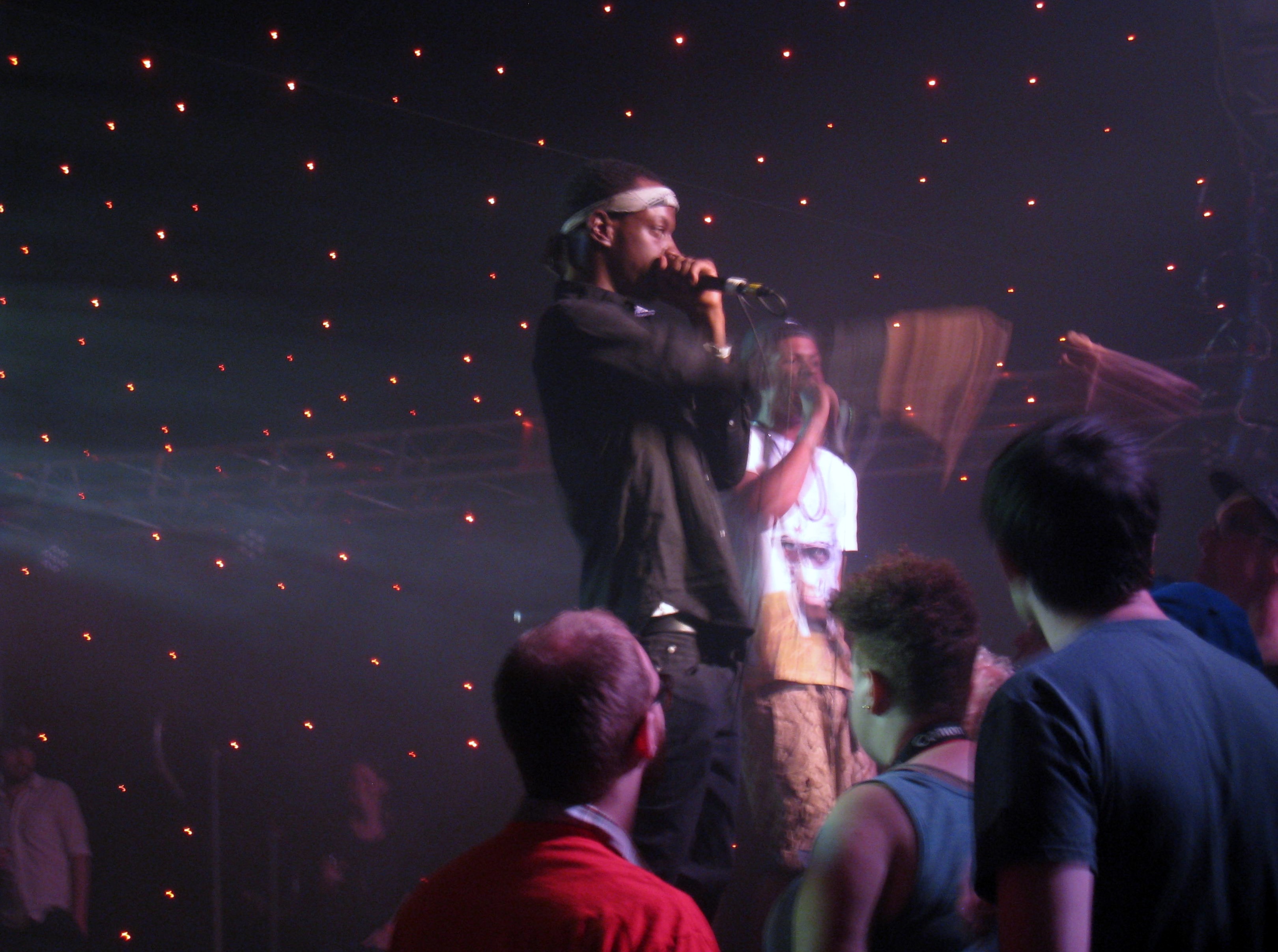 New York’s The Underachievers performed between Jimmie and Chad, which some considered unusual but I considered genius. All the Saturday night acts were so unique from each other that it felt like three different festivals, which is (I repeat) genius. The Underachievers were incredible word artists, enrapturing through rap, through heavy beats, through the smoke in the air, the intensity of which was probably a SappyFest first. Like Chad’s performance, I don’t think anyone saw this coming. Brooklyn duo Issa Dash and AK released Indigoism in January: rapid-fire rap like you don’t even know. Go download it right now and watch their videos.

After the mainstage, we booked it to the Legion to see the last of Coach Longlegs (so sweet) and the full Kappa Chow set: a festival highlight complete with garbage-can drumming and a mosh-pit. Beer all down my back. We headed to The Shed behind George’s Roadhouse for a definitely-breaking-the-fire-code after-party with Nap Eyes. Then, one of the most memorable moments of this year: Yellowteeth’s Josee Caron crowd-surfing during Crosss, pounding the ceiling with her fists while singing every word of “Lucky Loki.” Um, yeah, so badass. Then Pat Jordache started up a dance party but it was 4am, so I went back to my tent, ate mixed nuts and slept a few.

It started to set in on Sunday morning that Sappy was winding down, and I think everyone’s energy reflected this. I went to the main tent for a Best Bitter and met up with Shotgun Jimmie and Cannon Bro Cole to “grab a hangout.” “Grab away,” said Jimmie. So we went to play some badminton and talked about Sloan. I watched Cole skateboard and asked him about the Cannon Bros 2012 Polaris Prize nomination for Firecracker/Cloudglow: a two-piece masterpiece of super-smart power-pop. Cole said the nomination was completely unexpected and they had no idea how they were even nominated (modest guy, since the album is so good, top to bottom). Cannon Bros plan to record this winter. Along with recommending the band Grass Widow, Cole told me some funny jokes throughout the weekend, which I’d be happy to tell you some time.

I think an instant Sappy favourite was Monomyth at The Legion on Sunday. Monomyth played some “newies” along with “Feeling” and “Cigarette” and others. Pedals? Check. Reverb? Check. Surfy-math melodies? Check. Josh Salter losing his shit? Check. All aboard this journey, I really think Monomyth is going places. I really do. So tell your friends and then tell their friends. I heard lots of people talking about Monomyth’s wicked set and my little heart glowed. 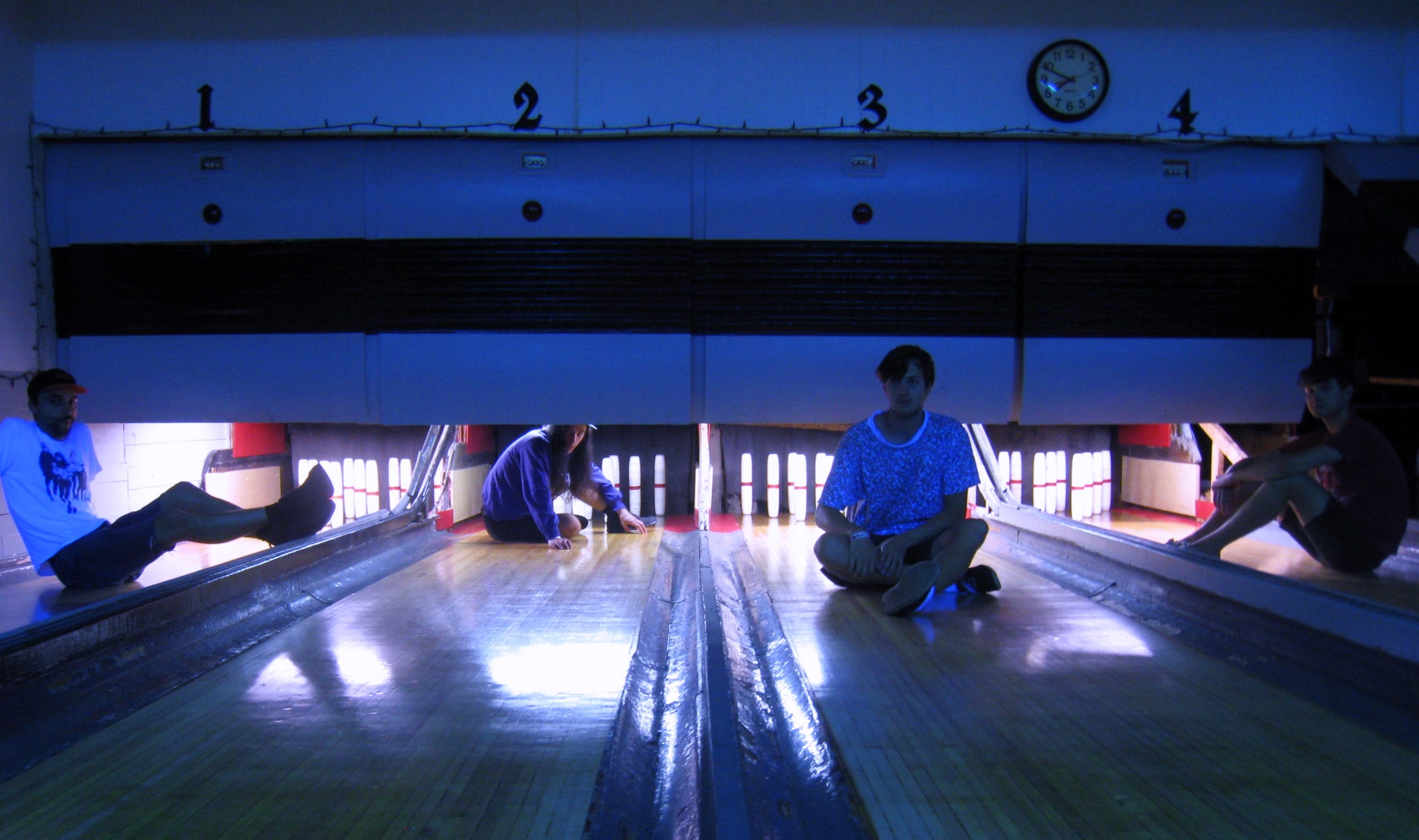 I need a moment to say all the vendors and food was pretty good. I didn’t pack anything except mixed nuts and some bananas so I was grateful for the great-full. There were also art installations, carnival games and the Cell Phone Hospital, a multi-media cell charging station.

At 8pm, Jon McKiel (who had been serving spicy tacos from his food truck all weekend with the help of Megan James et al.) took the stage for a Sappy spectacular star-studded stage: Aaron Mangle (Cousins) on drums, Klarka Weinwurm on vocals, Jay Crocker (Ghostkeeper) on guitar and Kevin Brasier (Yellowteeth) on bass rounded out Jon’s newer songs like “Tropical Depression,” and a few Cousins jams. Jon moved to Sackville last year and his sound has matured and darkened. There’s some distance from Tonka War Cloud and his new place is great.

Then the main tent hosted Colin Stetson, who looked up from his bass saxophone and said, “This is fucking special.” And it really was. He’s an other-worldly virtuoso. Naomi Shelton & The Gospel Queens filled Sackville with serious soul, including a Sam Cooke cover.

Almost last but definitely not least, Heaven for Real hit the Legion stage at midnight, playing Wanton jams and some unreleased ditties. Less Grundy banter than usual but just as much jazzy-jam fret-scaling and sweet rhyming showdowns. I think “Bobby” is such a cool song. Also, how is Nathan Doucet so good on drums? I mean, HOW? Well, he is. I saw it with my own eyes. After the show, I gave Mark Grundy not one but two unsolicited, probably uncomfortable (for him) hugs. Sorry, Mark, but I was just so happy. And man oh man, Scott Grundy’s smile. 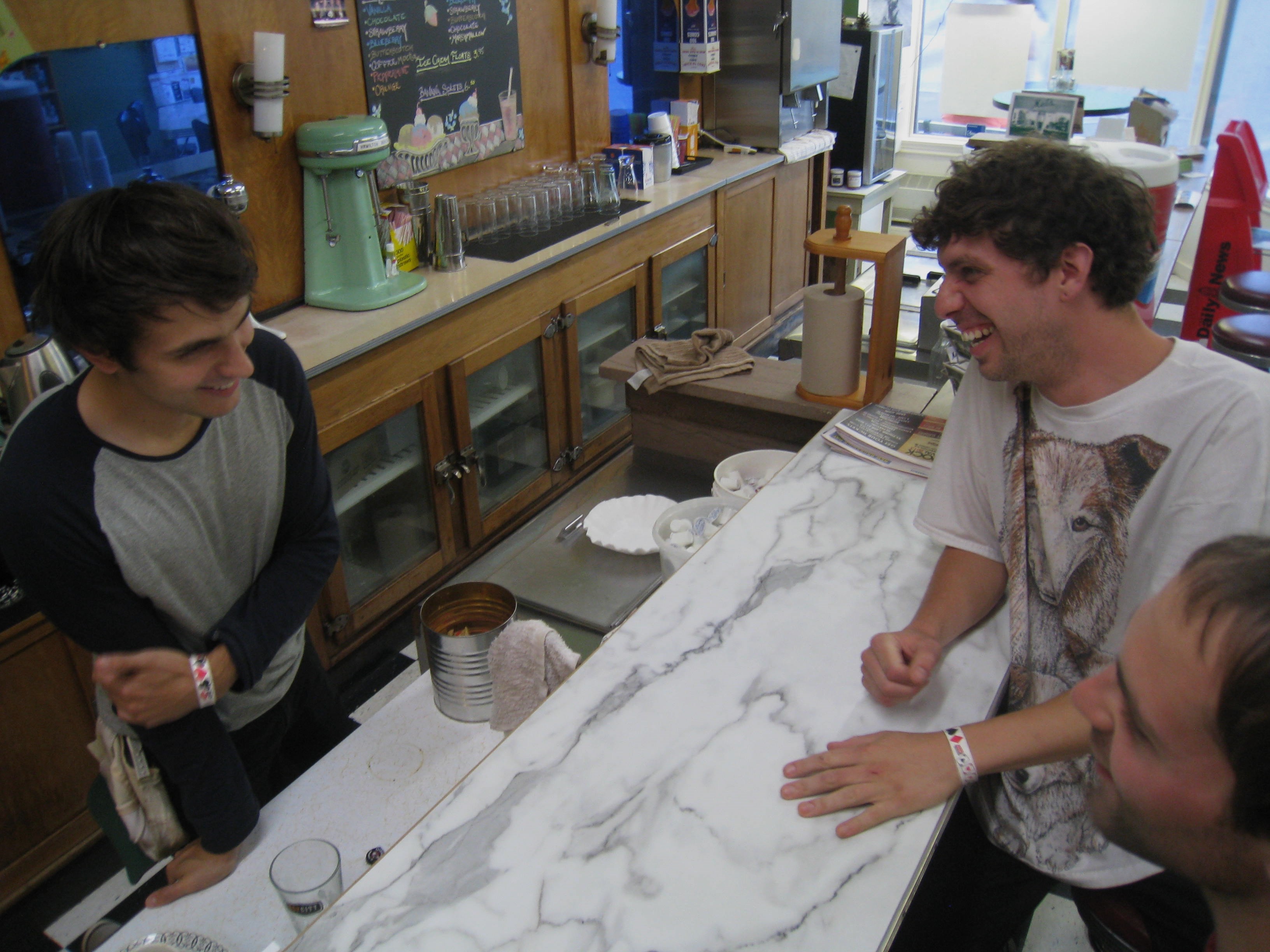 The last official show of the weekend: Weirdo Click rip-rapping it up, with a loyal Halifax crowd flooding the stage and getting down like Soul Train. Shout out to Lindsay Stewart who looked so ride or die upfront. And our girl Katie MacKay took the mic for bit. Yeah, it was great. Towards the end, Austin “AUX” Jennings yelled out, “Sorry for using curse words so much. SappyFest is the flipping best.” Great to see Sappy opening up stages. Great to see the Weirdos.

The night unravelled to a Shed Show with The Mouthbreathers and a Lorne Street dance party by DJ Neal Stewart, ending with R.Kelly’s remix to “Ignition.” Won’t you braid my hair?

With so much to cover, it’s really hard to cover it all. I wish I could have seen everyone and everything but you do what you can at Sappy and it’s all good. It’s so good. It’s so good that I gave poet extraordinaire Geordie Miller ten minutes to write a SappyFest wrap-up really late on Sunday night. He did and I couldn’t have said it better. Thank you so much, Sackville. 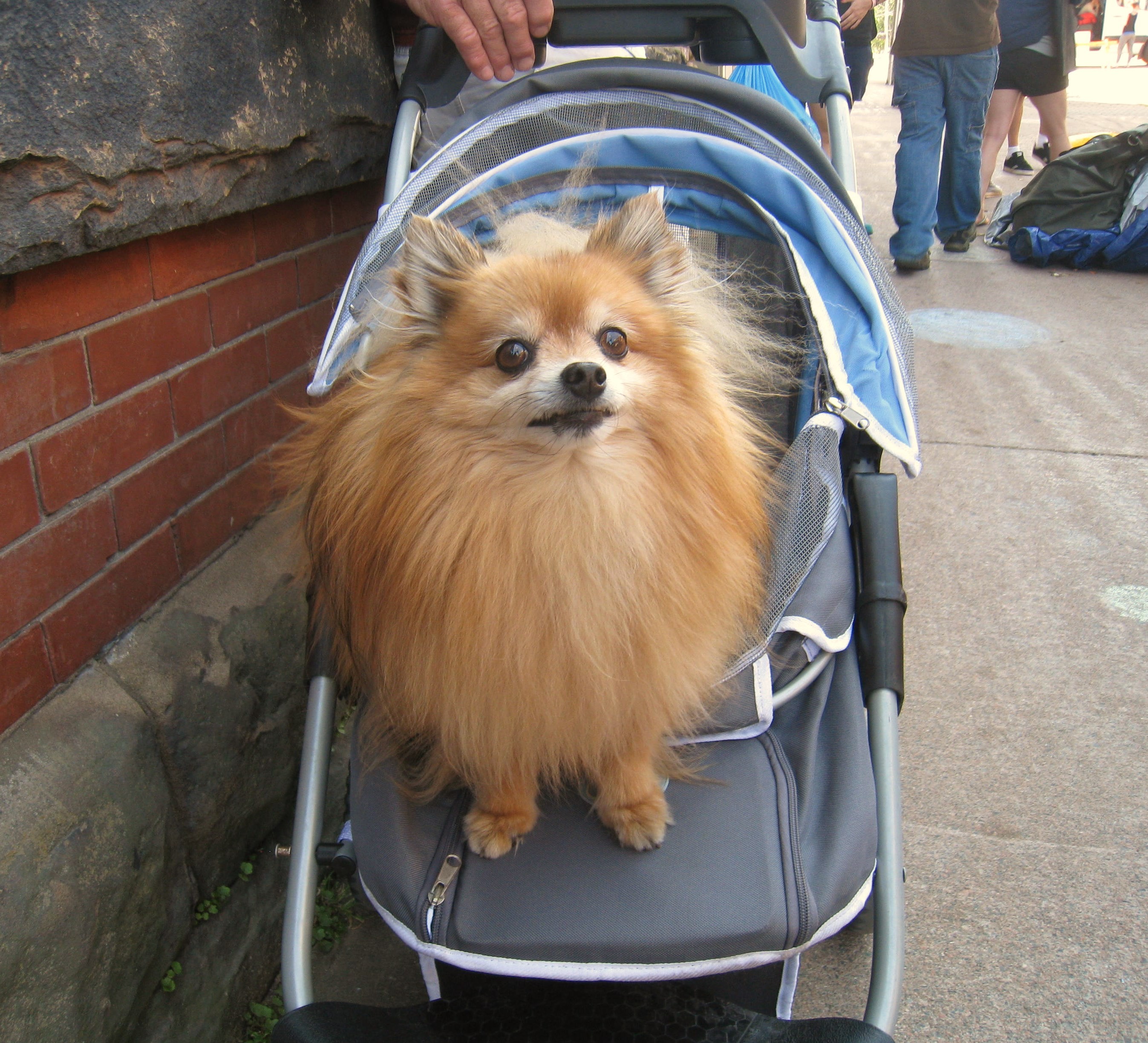