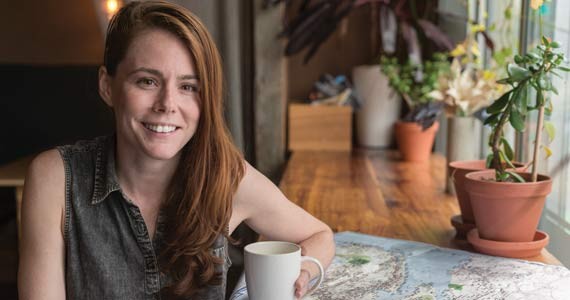 Sam Bambrick is a total show-off—a generous one, though. The Halifax-based adventurer and entrepreneur has one hell of a love story, about a PEI native who became totally enamoured by Nova Scotia’s many wonders, and she wants to tell the world all about it. Or better yet, show them.

On July 1 she’ll kick-off a summer of doing just that when she launches her business, Alternative Routes—a hop-on, hop-off shuttle bus/tour bus hybrid aimed at tourists, backpackers and locals looking to get out of town and explore. Because Nova Scotia’s visitors aren’t just cruise ship passengers.

“I’ve hosted Airbnb for the last three years, and people are always asking, ‘How do I get here? How do I get there’ and I’d be like, ‘Well guys, you’re shit out of luck’. There are a few services but they have to be booked and planned so far in advance,” says Bambrick. “Unless they have a car, most of them are staying in the city.”

It’s not that she doesn’t like the city, but as an avid traveller herself Bambrick has long been perplexed by how inaccessible the rest of the province—even high tourist-traffic areas—can be. “When I have Airbnb’ers I sometimes take them places out of my pocket,” she says. “I feel like you have to see it. I’m like, ‘Let’s go guys—to the Kiwi Cafe for chowder. To Peggys Cove.’ They’ve never seen anything like that before, and people are shocked.”

Her solution has been in the works for about two years, taking inspiration from a year-long backpacking trip through Europe and Africa. It was during that time that she was turned on to a similar hop-on, hop-off set-up called the Baz Bus—a backpacker-targeted shuttle service that travelled door-to-door between hostels in 40 South African towns.

Alternative Routes’ debut schedule will travel a loop that takes people from Halifax through the south shore—Peggys Cove, Chester, Mahone Bay, Lunenburg and Bridgewater—before crossing into the valley, where it’ll stop in Middleton, Berwick, Kentville, Wolfville and Windsor and then return to the city. Passengers can hop off and on as many times they want, for as long as they want (there are a variety of ticket options), or, if they’re crunched for time, cruise the entire route in one day for a crash course in the region. To start, the bus will depart Halifax once a day.

“The whole south shore is our most trafficked tourist area but there’s no transportation,” says Bambrick, who’s especially interested in helping to grow youth tourism. “There’s Kijiji or Ride Share but it feels so complicated for something so simple.” She hopes to be able to offer more frequent trips, and additional routes—like Cape Breton—as Alternative Routes grows.

“I’ve travelled all across Canada and I think Nova Scotia has such diversity of people and places. There’s a little bit of everything. It’s very unique,” she says. “And if we’re not catering to the people who are coming, that’s a problem.”