A clever comedy brought to you by Wit's End 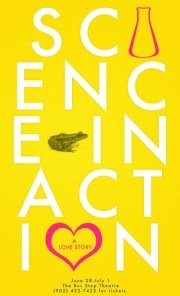 You’ve probably been following Wit’s End Theatre as they blog here at The Coast about the birth and growing pains of their company. You know Wit’s End is dedicated to putting on shows that will make you laugh, and their fourth production Science Inaction: A Love Story is very successful at that.

It’s the story of two science nerds from different disciplines—-sociology and neurobiology, who meet and fall in love, or at least lust. The audience watches their story unfold in different styles and “realities” evoking plenty of laughter.

There’s no doubt that actors Liz Johnston and Lewis Wynne-Jones have a remarkable comic chemistry. This piece showcases their charm and impeccable timing to a T.

The play itself, written and directed by Griffin McInnes, explores interesting ideas in interesting ways, however, it lags in spots and is ultimately dragged down by a too-serious conclusion for a brainy romp.

A cool set by Brian Riley and some brilliant film and projection by Nick Bottomley make this show visually memorable. Oh, and did I mention, you’ll laugh, A LOT.