Apparently the weather outside is not frightful enough to make good ice. 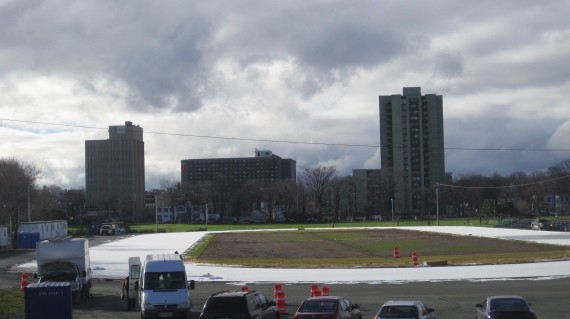 Update #2, December 17: The city has just announced that the grand opening ceremony for the oval will be held Monday, December 20, at 5pm, with the first public skate beginning at 6pm and continuing through to 9:30pm.

Update December 14: Ice-making on the oval has been thrown off by the rain, wind and relatively warm weather we're having, so tomorrow's planned opening has been postponed until next week. Stay tuned here for updates, or get info straight from the city by calling 490-2347 or checking the skateHRM Twitter feed.

Published December 9: The long-track speed skating oval on the Common should be open for public skating by “the middle of next week,” says city spokesperson Shaune MacKinlay. With all the equipment in place, crews started making ice Monday December 13 and the public will be allowed on as soon as the ice is ready. The city is hoping for a “soft opening” Wednesday, December 15, and an official grand opening the next day. The schedule for the rink, found at skateHRM.ca, includes lots of time for open public skating throughout out the day and into the evening, thanks to the lights at the facility. The oval will be closed to the public Christmas and Boxing Day, and again for some weekend competitions in January and throughout the two week Canada Games in February, but otherwise open seven days a week until it is dismantled in the spring.