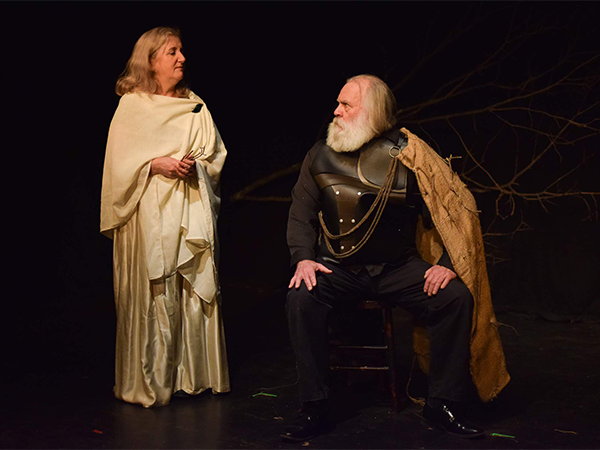 Maddi Tang
Lee J. Campbell as Odysseus and Sherry Smith as Penelope in “Chapter 3: The Great Teller of Tales” by Sophie Jacome.

If every man had to hold a branch each time he mistreated a woman, would men change, or would the world look like a forest? This is the counter-factual reality explored in Forest Town, an anthology play from The Unnatural Disaster Theatre Company.

The brand new troupe—comprised of Logan Robins, Linda Meian and Zach Levin—is the company-in-residence with Shakespeare by the Sea's inaugural Indie Theatre Residency. The program provides a new or emerging company with rehearsal space, access to props and costumes and a seven-day run at the Park Place Theatre in Point Pleasant Park.

"This is really our first show that is not part of a festival," says the artistic director Logan Robins. And with 10 playwrights and five actors, the production is no small undertaking.

"It was born out of the desire to create and reach out to the wider theatre community and to collaborate with as many people as we could," Robins says. "And to tell as rich and diverse a story as we could."

The settings of Forest Town range from ancient Greece to the 22nd century, and the 10 playwrights have each created their own chapter, exploring the unique worlds in which the misdeeds of several men are made visible.