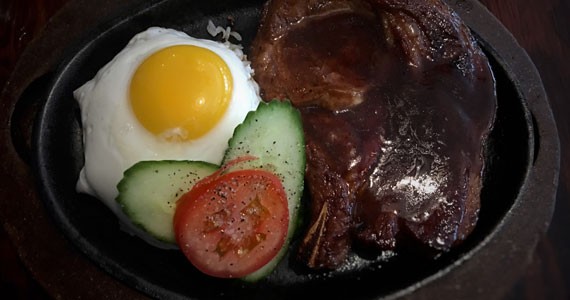 It's funny to find hidden gems in a city as small as Halifax. You'd think all our treasures would be easily laid out for us, obvious in the crosshatch of our streets—which, frankly, aren't exactly thick with dark corners and shadowy alleys. What's really funny, though, is that as the years ebb and flow and restaurants come and go, we tend to hide our gems in the same places.

It wasn't even five years ago when Laura's Cafe was serving up a warm, rustic menu of Russian, Armenian and Georgian food at 1022 Barrington Street. It was a great little restaurant. After it closed, a couple of quality sushi restaurants—Sakura Express, then Hiroshima Sushi—tucked themselves into that tiny space before Hot Plate: The Sizzling House picked up and moved from Dartmouth to land there this summer.

Halifax is no stranger to Filipino food: Rocky's Filipino BBQ and ASAP Mabuhay Bar & Grill has been on Blowers Street for decades and Big Ray's groceries and prepared food has been on Main in Dartmouth since 2010. Between the two, the city has had everything from chicken adobo to pan de coco for years now.

The Sizzling House puts most of its focus on its eponymous hot plates, but also serves sushi, tacos, soup, ramen and even poutine. The wonderful thing about Filipino food is that it has a quirky jumble of influences from across the thousands of islands that make up the Philippines, from the colonial reach of both Spain and America, and from trade with countries like India, China and Malaysia. It's a true hodgepodge, but with some through lines. Vinegar, for instance, is a common ingredient. Tartness and zing is easily found. You'll also see a lot of soy sauce, citrus, fish sauce and garlic. There isn't much heat, but there is often a sweet note. And you'll definitely find rice.

On Hot Plate's menu are some of the most familiar Filipino dishes, like adobo chicken—a potent vinegar-based stew, the sweet and sour national dish of the Philippines—and lumpia, small spring rolls. The core of the restaurant, though, is the tapsilogan menu, an all day breakfast of various dishes that are served with garlic rice and a fried egg—inangag and itlog—which helps creates the portmanteau silog. Along with tapsilog, with marinated beef, there's bangsilog, porksilog and chicksilog, with milkfish, pork chop and chicken, respectively.

Our breakfast starts with a tiny bowl of earthy, rich miso soup that is flecked with green onion. Our sizzling plates show up a little while later, each one with a scoop of garlicky fried rice, perfectly fried eggs, sunny side up, draped over top. My porksilog has a huge bone-in pork chop ($10.50) with a salty-sweet gravy, Mark's chicksilog ($10.50) has a splay of chicken marinated in lemon, vinegar and lemongrass.

The pork is tender and incredibly flavourful, having also been marinated in vinegar. The chicken also comes with another pop of vinegar, a dipping sauce thickened with minced onion. As the rice sits on the hot plate a crunchy golden crust develops on the bottom. The flavours are all simple, but well developed. The gravy on my pork chop sizzles; the fatty chop stays piping hot throughout the meal.

I also order the fish taco ($4.95), a huge brick of breaded fish, crisp and crumbly on the outside, flaky on the inside. My best guess is that it's a Janes frozen fish filet, nicely cooked in clean oil. At this price, I honestly don't care. While the bland tortilla is a disappointment, there is a crisp slaw, fresh and sweet pineapple salsa and chipotle mayo with a deep streak of heat.

The chef sends out complementary California rolls, fat with crab sticks and cucumber and topped with tobiko, spicy mayo and miso mayo. But we are too full to really partake. Too full, even, for the sizzling dessert—a brownie—or the hyper-saturated amethyst scoops of purple yam ice cream. That will be a gem to uncover another day.