At Parentheses Gallery until March 31, Senakovicz’ melancholy pieces tell a story of displacement and changing landscape. 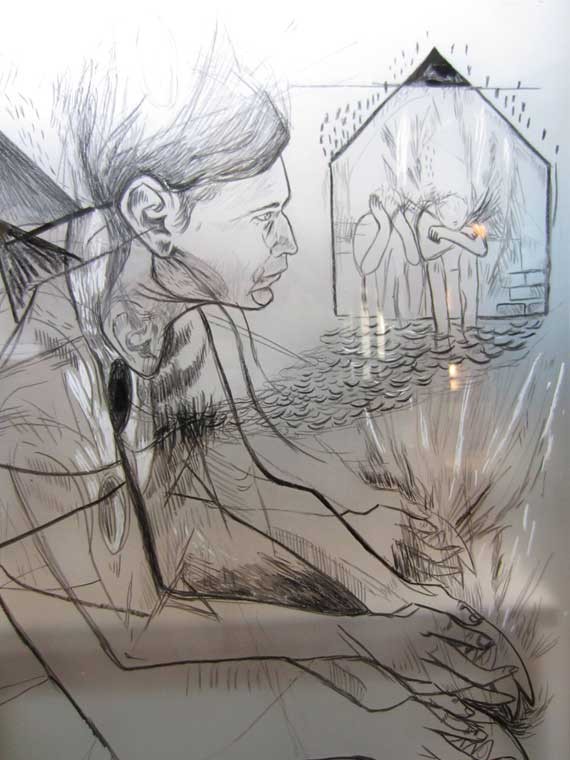 “The show is inspired by some work Emily Davidson and I did last year about the 1,600 people who were displaced when the Cogswell Interchange and Scotia Square were built. I think a lot about the folks who were displaced in relation to my relationship to the changing face of Halifax. I believe there’s an immense connection we share to our landscape and, in the case of a city, our architecture. It helps to ground us and when it changes. There’s often no mourning period or language to talk about how those changes affect our psyche. There is intense isolation and loss caused by the destruction of common space and, in the case of the Cogswell Interchange and Scotia Square, the destruction of whole neighbourhoods. Much of how I felt in my last years in Halifax were also feelings of isolation and loss regarding such spaces. The neighbourhood I lived in for six years—Macara Street—has changed a lot since I moved there but the changes are  much more striking now as buildings go down, and quickly replaced with new large structures. The destruction and vacancy on Barrington, the new glass inside what I knew as the Lismer Block when I went to NSCAD and the eviction of the Khyber feel heavy. I moved to Halifax only 10 years ago but it was the first place I felt at home. I moved to Truro last May and I now I realize that the Thomas Wolfe quote "you can never go home again" means a great many things.”