D’Arcy Wilson’s Re:Focus Sustainable Art residency explores the wilderness, our relationship with the wild unknowable and attempts a delicate balance with nature. 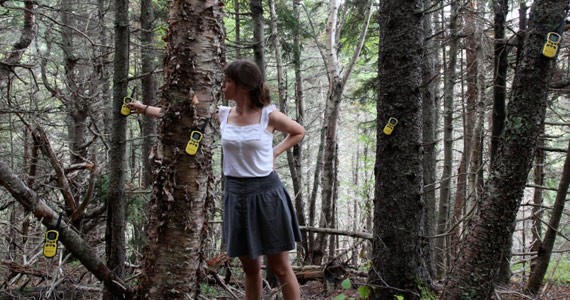 Several committees at the Ecology Action Centre focus on the protection of Nova Scotia's wilderness. Not only does forestry management benefit our atmospheric biology, it keeps intact the habitats of over 30 at-risk species. But facts and figures can lose potency. Sometimes outreach needs to be more visceral. Believing in art as a powerful form of communication, artist D'Arcy Wilson plans to convey the dangerous ways we've become estranged from nature and the importance of recognizing our difference from the natural world in an effort to save it.

As the Ecology Action Centre's recent artist-in-residence for Re:Focus Sustainable Art, supported in part by The Khyber Centre for the Arts and Visual Arts Nova Scotia, Wilson's appointment, featuring a series of performances called Protect Your Love: Fact and Fiction, culminates in a two-week exhibition at The Khyber. Opening on November 5, she will showcase her attempts to make animal contact across Nova Scotia's wilderness areas.

In the backcountries of Cape Chignecto, Kejimkujik and the Cape Breton Highlands, Wilson hiked into the September forests to film walkie-talkies she positioned at a distance, hopeful that large land-life---moose, deer, cougars, coyotes---would come close enough to speak with in an act of re-connection. This inherently one-way relationship was heightened by the use of technology: "A garish barrier between myself and the setting I'm trying to be a part of.

"Ultimately, there are two results," she says of the project. "Performance, the desire to have an animal listen and have a mutual contemplation, and then to create an artwork, to create a visual image in video and photograph where the impossibility of the desire to connect can come through. The end goal is to address the tragedy that is our separation from wild animals."

Wilson's Protect Your Love explores the consequences of a dwindling patchwork of protected Maritime forests, which conceptually began in the Rockies. Originally from Halifax, Wilson noticed our distressing relationship to animals while working on her MFA in Alberta. "I spent a lot of time in the mountains and I started to see the carnival of animal tourism, the frenzy of activity to capture an animal on camera. Watching tourists swarm black bears really fascinated me," she says. "So I began researching, and the core of my performance became our isolation from animals and our desire to have contact with the wild unknowable."

During her performances, Wilson adopts a naïve childlike persona whose idea of animals comes from our Disney-like anthropomorphization. This same character will sing lullabies to the taxidermy displays at the Museum of Natural History for Nocturne in an apologetic and melancholic gesture, coming from Wilson's sad acknowledgement of our divorce from the wild.

"It becomes more and more difficult, the lack of comprehension gets wider and wider," she says. "But the EAC is doing so much to increase the amount of protected areas," even though development, industrialization and economy can challenge the process and overall support.

"There's a whole other world out there and it's important to respect it, instead of considering it as ours so we can use those resources and treat nature as a standing reserve," Wilson says. "Seeing the separation is a beneficial thing. It's difficult because we're a part of nature, we're a part of this huge planet and its working cycles, but at the same time, we're removed. We have an incredibly human-centered view of wildlife. If we don't act, over time it will be gone."

Wilson hopes that the project furthers the EAC's progress in land protection and biodiversity through the visual arts. "Our wilderness is diverse, gorgeous and beautiful," she says. By recognizing our privileged position to the natural world, we can embrace and protect it.