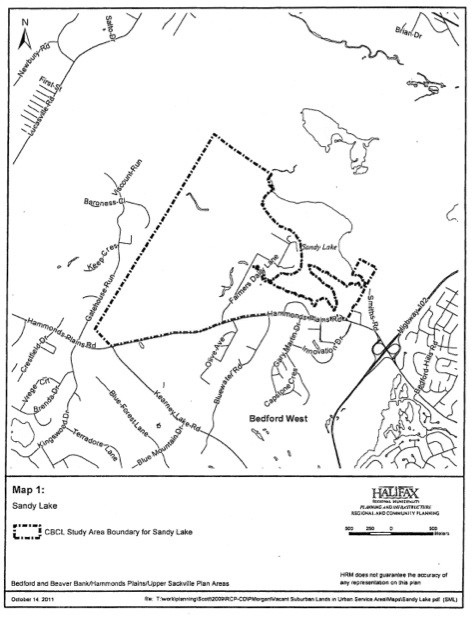 Halifax council Tuesday agreed to $2.1 million in financing to install an over-size sewage pipe that will primarily benefit one property owner—Armco, one of the largest development firms in town, and one of the largest contributors to municipal election campaigns.

This summer, Halifax Water will be installing sewage pipes to service Bedford West—the area west of Highway 102 and south of Hammonds Plains Road, which is expected to develop fully over the next 10 years. At issue is about 900 acres in the Sandy Lake area north of Hammonds Plains Road, the majority of which are owned by Armco; that area isn’t scheduled to begin development for another 15 years, and then not fully develop for another 20 years after that, if at all.

Armco says it makes no sense to install relatively small sewage lines to service Bedford West, then dig up the streets 15 years from now to re-install the bigger lines needed to reach Sandy Lake.

The difference in cost between the relatively small lines needed for Bedford West and the bigger lines needed for both areas is $3.1 million. At first, Armco agreed to pay for the bulk of the cost upfront, but only if the city guaranteed development rights to Sandy Lake, bypassing both required environmental studies and public hearings. The city rejected that proposal.

After Halifax Water rejected financing the larger pipes as too risky, a new agreement was reached: Armco will pay $1 million upfront, with the city financing the remaining $2.1 million. That money will be repaid to the city with interest, when—and crucially, if—Sandy Lake gets developed, with fees added to the property transfers for subdivided lots. In effect, the city is giving Armco an unsecured $2.1 million loan that won’t be paid for 35 years, if at all.

Councillors had a spirited debate over the proposal, with some seeing the agreement as locking the city into approving future suburban development, because restricting that development would come at the cost of losing the $2.1 million. And as councillor Jennifer Watts stressed, the debate comes just as council is embarking on a five-year review of the regional plan, which is intended to revisit growth targets for the urban and suburban areas of HRM—currently, development of the urban area is falling far short of targets, while development in the suburbs exceeds targets. Watts argued that approving the Sandy Lake financing scheme would make it that much more difficult to get on target.

In the end, council voted 17-6 in favour of the agreement, with councillors Watts, Lorelei Nicoll, Gloria McCluskey, Jackie Barkhouse, Dawn Sloane and Bob Harvey voting against.