Kiss the summer goodbye at The South Shore Fish Shack—it’s worth the drive, the wait and paying a little extra for. 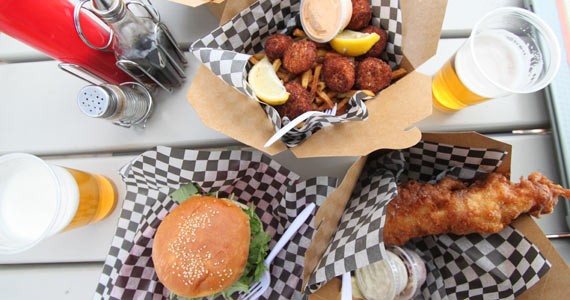 The screen door at the South Shore Fish Shack flaps and creaks, banging lazily against the doorframe in the weak breeze that makes its way up Lunenburg's Montague Street. The restaurant is small, but the line-up outside the door stretches the length of it and beyond, to the end of their patio.

The crowd is no surprise. Martin and Sylvie Ruiz Salvador have made Lunenburg an essential destination for food-lovers for a decade now with the beautiful French-inspired menu at Fleur de Sel and its casual complement, the Salt Shaker Deli. Their new take-out joint is no less an attraction.

As people amble out, making room for the next group in the line to stagger inside, we hear gleeful chirps of "It's worth the wait!" My friend Stephen and I shuffle forward bit by bit, until around 15 or 20 minutes later we're ushered in.

Once inside, the counter staff isn't incredibly friendly—it's service with a slash-mouth more than a smile—and our server seems impatient for our order. Since there's almost no interaction beyond ordering or paying, the cool welcome isn't a burden, but it also isn't the best first impression.

The umbrellas over the patio seating practically swoon under the heavy heat of the midday sun. I sit in a blot of shade with a Propeller Pilsner ($4), waiting for the lobster-shaped pager to buzz and let us know our order is ready.

Down the hill, a horse-pulled carriage clip-clops along the street below, past the bright red Adams & Knickle building and the Bluenose II, which bobs silently just down the wharf. This is the type of colourful, postcard-worthy harbour view that can't even be lost on the most jaded Nova Scotian; it's truly beautiful. Our gaze is interrupted by the blink and buzz of the pager.

The scallops, sourced from Adams & Knickle, are heavenly. Fresh and fat, each one is, miraculously, perfectly cooked. "If you were going to quote me, I'd say it's like biting through marshmallows," Stephen says, quotably. Panko, which they have been crusted in, browns very fast. Here it has darkened enough to give the scallops a toasty depth of flavour, which is very nice with the hint of smoky chili in the spicy tartar sauce.

Both tartar sauces are spiked with dill, which makes the regular version served with the fried fish an especially bright accompaniment. The beer batter on the fish is an airy, crackling gold dappled with white flakes of salt. As good as the batter is, it doesn't overpower the sweet, delicate flavour of the haddock. It's a great fish fry.

The crisp shoestring fries are addictively salty. Everything has been dutifully salted post-fryer: the seasoning is impeccable. With cheese curds and mild gravy the fries also make for a respectable poutine.

The lobster sandwich is a light, fresh counterpoint to the fried food. It's simple: a lightly toasted bun with shredded morsels and chunks of beautifully cooked lobster and a light touch of mayo. There is far too much arugula tucked into the sandwich, but with some removed, each bite is well balanced.

The prices are high for standard take-out, but the quality is anything but standard. There aren't many places that I'll stand in line for 20 minutes to pay more than I want to, but this Fish Shack is one of them.