A decade’s worth of collaboration between illustrator and writer produces The Illuminations Project at the AGNS. 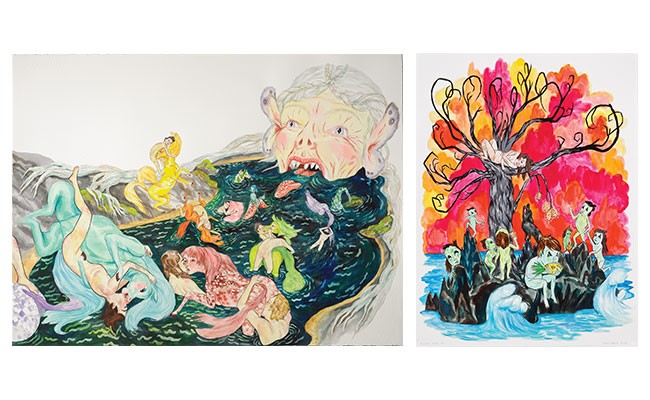 “Meet Bloodie,” reads the promotional material for the Art Gallery of Nova Scotia’s latest exhibition. A naked, dirt-encrusted girl stands in murky darkness as colours burst from her body: Rainbows stream from her arms and from between her legs, ribbons billow out from her waist and sticky pastel clouds float from her open eyes.

This is the would-be protagonist of The Illuminations Project, a collaboration between Shary Boyle and Emily Vey Duke. Formed over a 10-year period, the artists created a call-and-response project, pairing drawings by Boyle with texts by Vey Duke.

While the work does not follow a single narrative thread, Vey Duke’s authorial impulse for storytelling comes through as Bloodie, Peg-Leg and the band of wild boys that follow them return again and again throughout the body of work. Vey Duke’s writing flows neatly between poetry and fiction—the narrative is splayed and forked, it’s impossible and wholly unnecessary to move through the exhibition with some kind of chronology. The overall tone remains consistent and creates the feeling of a feminist epic poem, a collection of folk tales, limericks and stories that each hold their own strange, fecund and slimy universe.

The strength of the work comes in part from this mixing of taboo and tenderness, “seduction through sweetness, and underneath there’s a razor’s edge,” says Boyle in the pair’s artist talk. As Vey Duke writes, “Sometimes it is useful to be a lovely thing.”