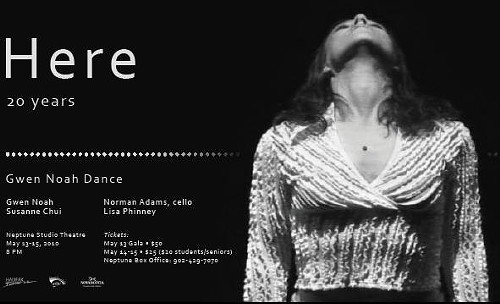 In arts terms, 20 years of surviving is its own tiny miracle. This weekend Gwen Noah Dance is celebrating two decades with Here, a performance at Neptune Studio Theatre (nightly at 8pm, May 13, $50, May14-15, $25). Not a typical retrospective, Noah sorted through years of contemporary dance pieces, pulling select movements and excerpts into what she refers to as a “moving painting.”

“It was a massive amount of material,” says Noah, recalling it was an emotional journey to go through such a full professional and personal history. But rather than just recreating the choreography as it originally existed, Noah mixes things up: turning some solos into duets and trios, and by bringing in a new generation of dancers—-Susanne Chui and Lisa Phinney—-to dance alongside her.