Two new plays and a remount of six-time Merritt winner Chasing Champions are among this year's offerings. 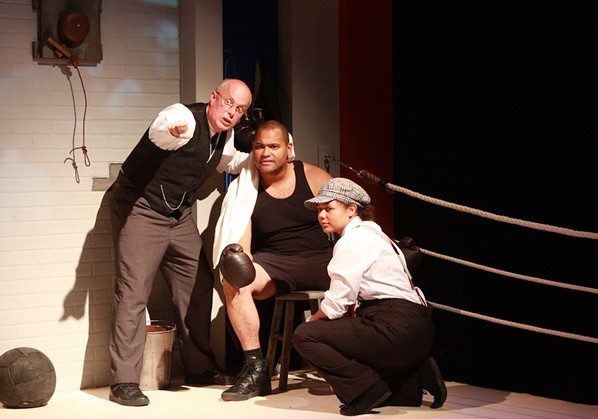 Ship's Company Theatre announced its upcoming slate on Saturday in Parrsboro. "This is going to be a season with plays by two women and a young African Nova Scotian," says Ship's artistic director Natasha MacLellan.

Kicking off the season July 4 will be Hook, Line and Sinner, the final part of the Sister Salter trilogy that has previously featured Joanne Miller's Habit of Murder and last season's The Mystery Play, by Josh MacDonald. Though the part's originator Mary-Colin Chisholm has written the show, Martha Irving will be taking over the role for the final installment. It runs until July 29.

Next up will be Kim Parkhill's Any Given Moment (August 8-September 2), a co-production with Theatre New Brunswick starring Alexis Milligan, Claudia Gutierrez and Wally McKinnon. "It's about three strangers who find themselves, through circumstance, trapped in a church basement together because there’s been a bomb threat," says MacLellan. "They’re a homeless man, a yoga mom and really angst-ridden teenager. So they do not gel, but they end up having really interesting conversations. It goes to a beautiful place."

The season will close in October with a remount of Jacob Sampson's Chasing Champions, the story of Nova Scotian boxer Sam Langford. The original Ship's production, in 2016, won six Merritt Awards. MacLellan will stage it in the HRM with the hope of getting more eyes than she did the first time.

"Unfortunately that was the summer of the Chronicle Herald strike—our theatre was hit the hardest," she says. "We’re a two-hour drive from HRM, and people wait for the reviews of our shows. No one comes until there’s a review. You look at Champions and you’re like, 'That was a really good show.' Less than 1,500 people saw it and we ran it for three weeks." (The theatre's capacity is 130.) "They were playing to 20 people a night!" After the production, the show will tour to Ottawa's National Arts Centre.

It's been MacLellan's mandate to push for diversity of voices her whole career (she's been steering the Ship for six seasons). "I’ve always been really firm about gender equity, for sure, that has always been a priority of mine. Even when Nate [Crawford] and I started Forerunner a million years ago, it was all about finding the voices nobody else was doing," she says. "And we really tried, hard, to find people who were writing. I remember trying to convince Gordon White to write—at that time we didn’t know anyone who was Mi’kmaq in the province who was writing. Now there’s Lara [Lewis, a Coast contributor] and Raven [Davis], the voice is getting out there now. But back then it was ‘Come on, Gordon!’ By the time I got to the Ship, I knew that it was important to do. Because you’re going to claim to be doing Atlantic Canadian stories—they can’t be all white. It’s one of those things that is in the forefront of my mind."