Taking to the streets to protest inaccessibility. 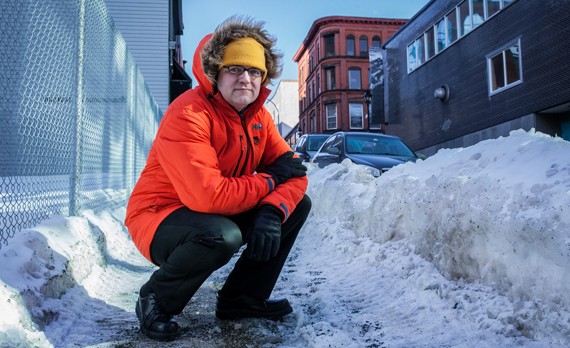 Riley Smith
Councillor Mason: The city needs to “make sure the standards are met” for ice-clearing.

The amount of snowfall this winter has been hard on all of us. I have cerebral palsy, and have had to work from home multiple days to avoid injury. When you have existing balance problems, ice isn’t just slippery—it’s disastrous. Think doing the shuffle without control.

There are many of us in Nova Scotia with mobility issues, more than anywhere else in Canada. Statistics Canada’s 2012 survey on disability found that 19 percent of us over 15 are disabled. That’s one out of five folks. Which means if you don’t have a disability yourself, you likely know someone who does.

I’m used to snow and ice melting within a couple of days, but with storm after storm and freezing temperatures, the roads and especially the sidewalks have remained treacherous for weeks. When I brave it and venture out, I deal with slippery slush or ice and frozen, impassible snowbanks. I have to be escorted from my cab to the door.

“Even with the help of my cane, I often slip on the hard ice or fall while trying to scale the mountainous snowbanks that the plows pile up at curb cuts,” says disability activist and author Kaleigh Trace.

Trace and her colleague Amanda Stevens will be holding a sidewalk protest Friday, February 27. The goal is to encourage HRM’s municipal government to look into this issue further. “We want more attention to be paid to creating accessible sidewalks for Halifax citizens,”  Trace says. “We want the city to further invest in equipment and crew members so as to make our city safer.”

Participants will meet at 4pm across from the Halifax North Memorial Library on Gottingen Street and begin the protest at 4:30. For those who cannot attend, an online discussion is happening in conjunction with the event. Tweeters are encouraged to post pictures of any sidewalks they find themselves unable to access, including the hashtag #inaccessibleHFX.

Trace and Stevens say they appreciate the efforts of the the city’s snow removal crews and understand that this winter has been an exceptional one, but hope to bring more focus to the issue of pedestrian safety.

Councillor Waye Mason, who sits on the accessibility committee, echoes Trace’s concerns. “Halifax needs to get more equipment, more contractors on the road and make sure the standards are met under normal conditions,” he says.

Since 2013, it’s been the responsibility of HRM to ensure sidewalks are clear and salted throughout the entire Halifax region. Municipal and contracted crews are supposed to have all areas cleared within 36 hours after the end of a snowfall.

Mason’s fellow councillor Linda Mosher brought an idea before council this week to augment the city’s traditional rock salt application with other products that are more effective in cold temperatures.

“We need better outcomes to ensure the safety of residents in our city, especially those who have difficulties getting around in winter,” she explains.

Meanwhile, Haligonians with mobility issues are not only worried about their safety, but eager to resume their daily routines. Trace is managing, but for many, conditions remain impossible. “While I am only sustaining small cuts and bruises,” she points out, “I am quite aware that others like myself who live with mobility impairments may not be able to go outside at all.”

Anyone requiring accessible transit for Friday’s protest can email sidewalks902@gmail.com. For more information, consult the Sidewalk Protest! event on Facebook.