Is it time we traded our Blundstones for ice cleats, or can Halifax face its icy walkability problem head-on? 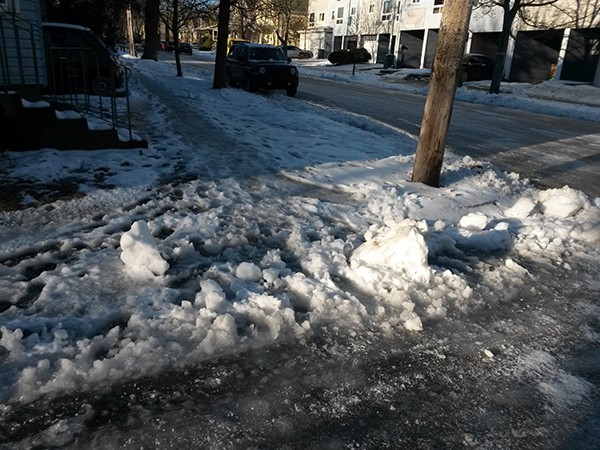 Last week, Halifax Needham MLA Lisa Roberts fell on the ice and broke her wrist, almost sliding onto the road in the process.

“When I was picking myself up, I was virtually on the street,” she says.

It was more than a single bad patch of unsalted ice, though. Roberts’ home and work office are less than a kilometre apart, and in her short she slipped (but didn’t fall) around 10 other times.

She was one of many residents struggling to get around HRM after last week’s snowstorm and temperature freeze rendered the city—once again—unwalkable.

According to the Integrated Mobility Plan, pedestrian safety is supposed to be a top priority, so why is it acceptable that each winter many residents won’t be able to leave their homes without risking serious injury?

In 2013, the municipality decided to take charge of sidewalk snow removal throughout HRM, rather than leaving it the hands of Haligonians. It’s been a contentious issue at City Hall ever since, especially during the hellish winter of 2015.

Halifax West Armdale councillor Shawn Cleary is hoping to once again bring the subject to debate. Cleary tells the Chronicle Herald he plans to ask to re-assess its sidewalk clearing strategy and prioritize pedestrian accessibility.

“Clearly, if streets are passable all the way through a storm and not long after and sidewalks take two and three days to be clear, we’re not prioritizing pedestrians,” Cleary said.

But the result of doing ‘more’ to better sidewalk conditions will come down to taxpayer dollars.

This year’s municipal budget on sidewalk snow removal in the HRM is $6 million. Expanding the same downtown service standards to the rest of the city’s contracted areas would likely increase that cost to $10 million, at a time when city hall is already contemplating a tax hike to cover its operating budget.

Even with the extra money, the city’s service will be at the mercy of mother nature.

“I’m not sure we’ll still get to bare concrete but it’ll certainly be better than what we have,” Cleary tells the press. “But are residents of Halifax willing to pay that much?”

“There were lots and lots of people in the emergency room that day that had fallen, as I had,” she says.

The other option would be for to reverse its 2013 decision and put the responsibility for sidewalk clearing back into the hands of the public, who seem to be doing a little bit of a better job than HRM’s contractors.

“When I crossed the road and continued on the next part of the sidewalk, I know I was walking on areas that had been salted by businesses,” says Roberts.

Of course, we could also just close our eyes and wait until April’s .