Slut provides a jumping off point for larger discussions 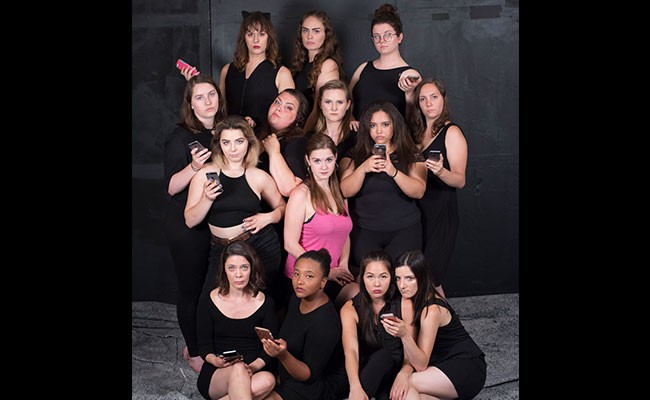 What is a "slut?" That's a question that's been on the minds of over a dozen Halifax women who are bringing Katie Capiello's play, Slut to the stage, presented by LunaSea Theatre Company. It follows 16-year-old Joey del Marco's deposition in her sexual assault case. Local filmmaker and actor Koumbie is one of those women, cast as Jane and Sylvie.

"'Slut' didn't mean anything to me at first—it was another one of those words that sometimes is used to put down women, sometimes used in a playful way," Koumbie says. "But now it's starting to encapsulate the feminist movement and how complicated that is, because it is complicated."

Kya Mosey plays the eponymous "slut," Joey del Marco. "It doesn't have a set meaning," Mosey says of the word. "People use it as an insult because it has the freedom of encapsulating so many things because the term itself is so broad...I don't think people use it towards themselves unless it's a joke."

Slut is playing at the Sir James Dunn Theatre at Dalhousie University August 24-26, before embarking on a provincial tour. It premiered in New York in 2013, and had its Canadian premiere last summer as part of Festival Antigonish.

"We're looking at a lot of places to bring it," says Ryanne Chisholm, who also directed last summer's version. "Since our funding is from the government of Nova Scotia, Nova Scotia is our first priority."

The best part? The initial run in Halifax is entirely free.

"We're hoping with the free shows in August people will demand to have it at their school or community centre," says Koumbie.

Each show will be followed by a talk back in which Chisholm will facilitate a discussion with the cast. Along with regular theatrical rehearsals, the cast has also been training in how to facilitate conversations around language and rape culture.

Chisholm says that students she's spoken to say children as young as Grade Six should be seeing the show. While she doubts it would reach an audience that young, she does insist that the most important thing is that people just see it.

As Chisholm sees it, "we don't pretend to have all the answers. We're a jumping off point for larger discussions."