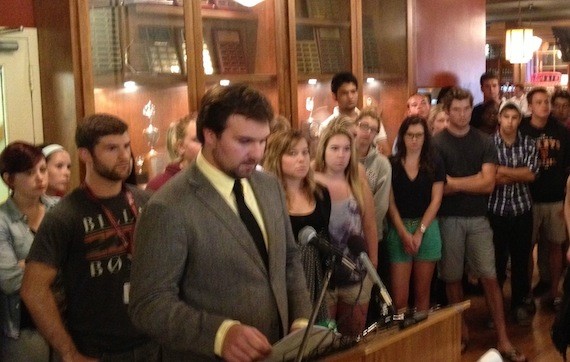 The cluelessness of it is exceeded only by its ugliness.

Yesterday, 80 student "leaders" at Saint Mary's University led 300-to-400 newly arriving students in a chant advocating rape: "Y is for Your little sister, O is for Oh so tight, U is for Underage, N is for No Consent, G is for Grab that ass."

The chant was caught on video and posted to Instagram, apparently by a female student who found it amusing. (I find no reason to embarrass her, so I won't name her.)

After CBC aired the video last night, the response was overwhelmingly, understandingly and appropriately one of disgust. As of this writing, the CBC headline says the chant was about "underaged sex," but that's obviously missing the point that it is also about rape, and bluntly so.

The story went national, and ever since the student association, SMUSA, which organizes the "Frosh Week" events that included the chant, has been in disaster response mode.

Today, SMUSA president Jared Perry held a press conference at The Gorsebrook Lounge, the student bar at SMU. Many dozen of the student leaders, probably most of the 80 present for the chant, were present as well. It was clear they are deeply troubled by the turn of events.

Most of the reporters in the room, myself included, were flabbergasted that a blunt and crude pro-rape message could be simply accepted without reservation by both 80 student leaders and 300-to-400 participants, both men and women. Perry astounded us even more when he explained that he himself had chanted the chant, and has for each year he's been at SMU, dating back to 2009. Presumably, there were 300-to-400 students at the Frosh Week chant each of those five years. Perry says none of those thousands of people have ever complained, although I'm told that somewhere in the hundreds of comments on the ceeb article, someone claims she complained last year, to no effect.

Moreover, said Perry, "we didn't think of the message, we just thought of the rhyme and rhythm" of the chant. I asked how it was transmitted from one year to the next, and Perry said both orally, by people who remembered it, and in writing.

Perry says the chant was "the biggest mistake of my life," but he won't resign from SMUSA. Instead, he has promised a renewed focus on sexism from SMUSA. Notably, in past years, SMUSA has refused to fund "Consentfest," a student-organized anti-rape program; Perry says "it would be a good idea" to fund it this year.

Well, hopefully this is a teachable moment. It appears the 80 student leaders are sincerely aware that the chant was inappropriate, and maybe this will lead them to reflect on the larger issues at play. And, it allows us all to engage in more meaningful conversation about sexism and rape.

So let's talk about this. Yes, the chant is pro-rape: "N is for No Consent" can't be any more definitively pro-rape. And, yes, the chant is part of our sexist culture. It is predatory toward "your little sister," not your little brother, because evidently college students will shrug off rape of girls, but rape of boys is unthinkable, or at least no joking matter, in a sexist, homophobic culture.

I think there are other issues still worth discussing, including: Why is it that while SMU has a fairly multi-cultural and diverse campus, the "student leaders" are overwhelmingly white and, evidently, to a person, clueless?