When snow + cars = a case for narrower roads and wider sidewalks 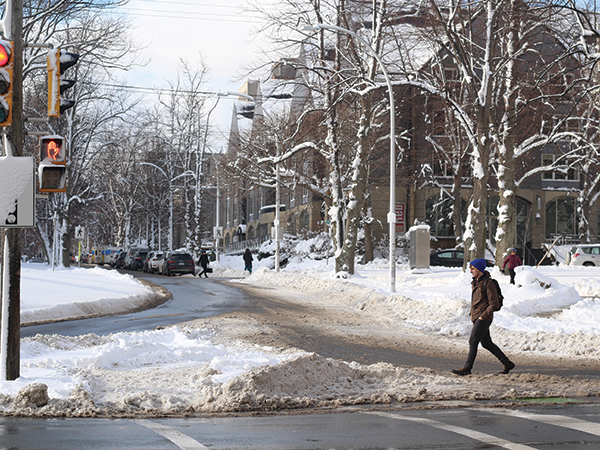 Although snowy roads can inconvenience and annoy drivers, they're pretty exciting for John Kyle. Snow on the roads means within just a few hours, sneckdowns will appear.

"I found out about sneckdowns a few years ago and thought that was a really cool idea to see how the streets are actually used, instead of how they're designed," says Kyle, who runs the @sneckdownhfx Twitter account.

Sneckdowns are effectively curb extensions (AKA neckdowns) brought on by snowfall. Where vehicles drive, the snow clears. Where they don't, a sneckdown forms.

"I get around everywhere by walking or biking, and pay attention to street design," says Kyle, who took over the sneckdown account in 2018 after its previous owner left the city.

On lunch breaks from his day job in IT at Dalhousie, Kyle often takes walks around downtown, seeing where sneckdowns form and documenting them in photos he posts to the account.

"I'm often walking places with my kids and just see how intersections and streets can be better used or better laid out," he says.

Queen & Morris is ostensibly two lanes wide but functionally four lanes wide. It’s chaos for pedestrians but the #sneckdown shows it doesn’t need to be this way.

Whether they're bike lanes or crosswalks that could be widened, or streets that could be narrowed for traffic calming, a quick walk downtown on the day after a snowstorm provides plenty of examples.

"I think that there is appetite within city planning departments to make things better for people who aren't driving," he says. "And these are just good ways to prove hypotheses about it."

In other cities, Kyle says planners use flour to create similar observations. But in Halifax, the frequent snowfall means the phenomenon happens on its own.

"You can do this in other climates, but it's very easy here, it's natural," he adds.

"I think it's important that we think critically about how we're allocating public space," she says.

In places where bike lanes already exist, Banfield says sneckdowns can show that they could be expanded or made larger.

"It shows where there's room for improvement," she explains. "I can see that there's plenty more room on the streets for good quality protected lanes that are wide enough for a variety of different types of bikes."

Banfield says that although sneckdowns are anecdotal evidence right now, that doesn't mean city planners can't gain knowledge from them.

"Just having photographic evidence speaks volumes. I don't see why that couldn't be included in a staff report about how to redesign a certain street," she says.

Banfield says that if streets were narrowed in response to sneckdowns, it would automatically calm traffic and make pedestrians and cyclists safer.

There's a real opportunity there to improve the intersections, and that would also help slow down turning vehicles if they know there's actually a barrier there," she adds.

As bike mayor, a position that is designated by Amsterdam-based social enterprise BYCS, Banfield says she wants to focus on accessibility.

"I'm hoping the planners and whatnot are out on the street seeing what I'm seeing," she says.

Kyle says by posting on Twitter, he hopes to crowdsource more photos of sneckdowns across the municipality and beyond.

"There's kind of a global network of sneckdown tweeters, it's not just in Halifax," he says.

"There does seem to be a good reaction of people recognizing that our streets could be used in better ways, and this is just a good visual way to depict that."