Snow clearing in Halifax is a disaster

Drivers and pedestrians, young students and elderly homeowners, everyone’s pissed off about the snow on our streets.

Two snowstorms in one week is apparently all it takes to make HRM completely inaccessible. City sidewalks are filled with more stomped on white powder than a nightclub bathroom. Side streets remain free from any visible asphalt. Even the cleared main streets are reduced to a lane-and-a-quarter thanks to bulging snowbanks. And somehow that all sounds better than the great barf lakes of brown water that will submerge every intersections as soon as temperatures creep up.

Seems to be no priority for high-traffic sidewalks in #Halifax unbelievable this is across fr @ScotiaBankCtr @hfxgov pic.twitter.com/Iqfgj3nUsk

Streets and sidewalks are cleaned in order of several official priority levels. Priority one are any main arterials, emergency routes, bus corridors and snow routes in hilly terrain. Those are supposed to be clear within 12 hours of the end of snowfall. Priority two streets have medium to low volumes of traffic and are supposed to be passable within 24 hours.

Those service standards, of course, go out the window with blizzard conditions. With multiple snowfalls, operators return to the highest priority streets even if the lower ones aren’t yet clear. 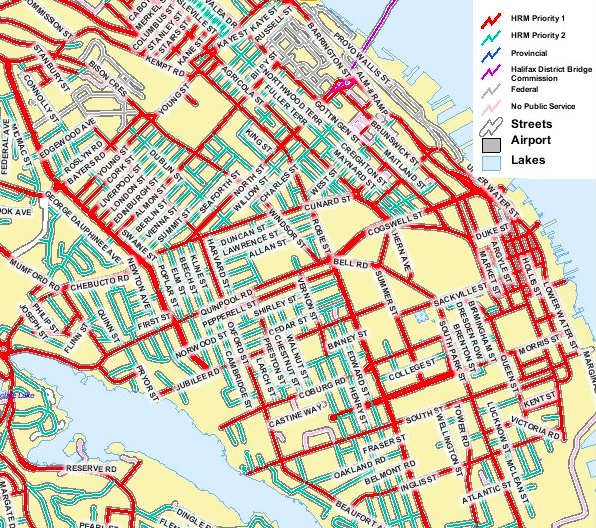 Maybe we can’t win against winter. Snow seems to have KO'd Halifax as easily as any other sleepy, seaside town. We could probably make some tourism bucks off it, if we tried.. Turn those sugar-crusted roads into a quaint selling point for anyone seeking the docile inadequacies of small-town living.

At the very least, city-controlled sidewalk clearing has been something close to failure. Why else would residents be asking councillors for the right to shovel more snow?

The 2013 decision to hire private contractors for city sidewalks already resulted in a 75 percent increase in complaints last winter, with many citing damage to driveways, steps and lawns. Last year, the city shrugged that off as part of the "learning curve." Training wheels are off now, though, and service still isn't up to snuff.

Sure, it's been a rough week for storms. And complaining about snow is takes the gold on the Canadian list of fetishes. No one's expecting miracles, here. But it's shocking how effectively a couple snowstorms can shut off the city. Halifax shouldn't be this impractical to live in.

UPDATE: From HRM: "The municipality recognizes how frustrating the past week has been for commuters, particularly those with mobility issues, and we appreciate residents’ patience as snow removal continues. Additional equipment has been brought in to supplement the four municipal loaders, 40 street plows and 10 sidewalk plows that are currently deployed to haul away the snow."

Problem areas and sidewalks not meeting service standards will be the focus of clearing operations over the next 12 to 24 hours, says the city's press release. "Like the streets, the sidewalks will need repeated salting, scraping and warmer temperatures before conditions can improve significantly."