So is the Nova Centre cursed, or what?

Downtown convention centre’s completion date is delayed, again, and nobody’s sure when the damned thing will finally open. 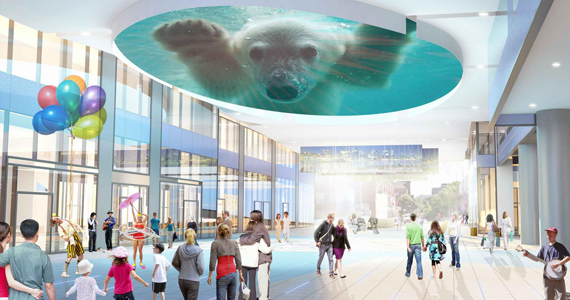 In its architectural renderings, the Nova Centre exists on a perpetually cloudy day. Billowing, white masses of clouds hang in the glass windows, as if reflecting the heavens into the city. The depiction of the convention centre’s interior along its Grafton Street promenade is filled with carnival-esque buskers and stock image patrons strolling by as a giant polar bear looms over the thoroughfare from the ceiling. It’s presumably some sort of projection, unless a titanic-sized aquarium is going to be retrofitted into the complex’s blueprints.

Whatever the colossal bear’s purpose, these artistic renderings showcase a building that appears to be set somewhere outside of our own reality. Increasingly, it seems like an alternate Earth is the only place we’ll ever see a completed Nova Centre.

The “substantial completion” date for the convention centre has been delayed yet again, pushed back to a time yet-to-be-determined next spring.

“Steps are now underway to get confirmation of the construction timeline,” Trade Centre Limited spokesperson Suzanne Fougere writes in an email. She said the company has been working with organizers to relocate the seven events that will be affected by the delay into the existing World Trade and Convention Centre.

The original target for substantial completion of the Nova Centre was supposed to have been January of this year. That was later pushed back to September 30, and then subsequently delayed again until March 2017. Now, it’s anyone’s guess when it will finally be ready.

Since the Nova Centre’s 2012 announcement, the $500-million project, backed by funding from all three levels of government, has been roiled by redesigns, accusations of receiving an “unfair advantage” over other developers and threats of legal action from nearby business owners.

Which sort of makes you wonder: Is the whole thing cursed? That would explain the endless series of construction delays and the impact on its neighbouring businesses. What other explanation could there be?

Mayor Mike Savage calls the latest delay “disappointing,” but was evasive as to whether he thinks this disappointment will be the last of the many that have come so far.

“Am I confident? My basis of my confidence comes from having been in the building... It seems like it’s coming along pretty well,” Savage says. “But I’m not part of the construction management team. I have to believe what I hear, so I’m pretty confident this will be the last delay.”

Savage seems more confident that the building’s misfortunes are not the result of a hex, but if that was the case, he doesn’t believe being inhabited by unearthly beings would preclude its future success

“We have a lot of buildings in this city that are alleged to be cursed, and they’re some of the best buildings we have,” says the mayor.

Ah, but what about that piercing wail that emanated from the construction site this past spring, dubbed by social media users as the #HalifaxHowl? At the time, then meteorologist —now city councillor—Richard Zurawski told The Canadian Press that the noise was fairly common at construction sites, and would likely stop once the Nova Centre is complete. Or was it an omen of construction woes to come?

Fougere says she has no reason “at all” to believe the Nova centre is being plagued by paranormal forces, but what’s really more likely? That the Nova Centre is a testament to developmental overreach—a Sisyphean money suck, fuelled by a misguided desire for Halifax to compete amongst Canada’s biggest cities?

Or that the convention centre is damned by black magic?

To find out, listen for a high-pitched howl coming from the Nova Centre this Halloween. Is it the anguished scream of a celestial polar bear, or of the city of Halifax itself?