African Nova Scotians have a history hundreds of years older than Canada, and a flag is one way to celebrate that. 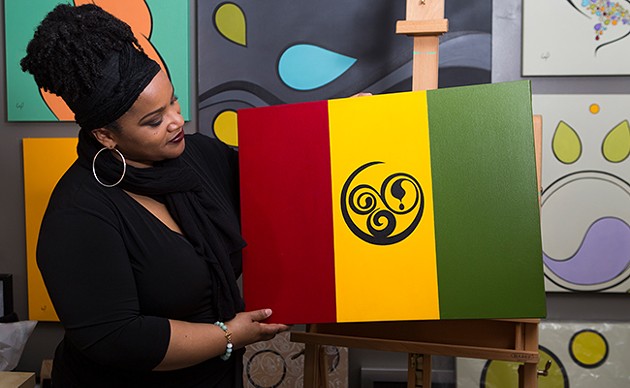 It has been a long journey that has landed us here in this place, Nova Scotia. I am speaking on behalf of myself and other people of African descent who are now considered indigenous Black. Meaning, this is home. Ask any of us where we're from and we will proudly say "Nova Scotia." We are Scotians. A creative, vibrant and community-based culture, in repair.

When we think of culture we think of those visible and very obvious components such as: food, language, religion, traditional clothing and hairstyles, artistic expression and the associated flag. The kind of things that make us proud to belong.

There are also the non-visible aspects of culture, how beliefs and value systems are played out. I've seen this explained using the analogy of an iceberg, with the tip of the iceberg being those visible or more obvious markers of culture and the larger portion of the iceberg, which lies beneath the surface, being those invisible components such as norms and values.

As a consequence of the way we arrived here, many of these visible components were stripped away, lost, stolen or denied to us. We are working at putting these pieces back together.

One of those pieces is traditional foods. I wrote an article last year about African Nova Scotian cuisine that was followed by much inquiry about its legitimacy. Our recipes and cooking methods have been collected along our journey from West Africa to the southern United States through to our migration here in Nova Scotia beginning in the 1700s. African Nova Scotian food is a fusion of African, Caribbean and southern US flavours, combined with traditional Nova Scotian recipes using local products.

Even if you don't speak your culture's language, you have the option to learn it. Is that an option for African Nova Scotians? What is our language? As a fifth generation African Nova Scotian I do not know exactly what part of West Africa my ancestors came from, much less the language they spoke. This is one of the cultural puzzle pieces that still requires work. Work that is currently being conducted.

There are few things in life that are paramount to feeling proud of one's culture. Cultural capital is the foundation to building strong social structures. It is the glue that binds.

I want to build on our cultural pride. As a self-taught African Nova Scotian artist working with symbolic imagery I knew I wanted my contribution to be visual, so I created a flag that represents my unique culture. I've seen how proudly other ethnic groups in the province fly their flags. Both the Acadians and Mi'kmaq have flags that are used to display cultural pride and symbolic meaning.

The African Nova Scotian flag has been long overdue.

The African Nova Scotian flag I created features the sankofa symbol. Sankofa is one of many ancient Adinkra symbols conceived in West Africa. It is represented by a bird with its head turned backwards taking an egg off its back or a stylized heart shape. Sankofa is often associated with the proverb, "Se wo were fi na wo sankofa yenkyi," which translates to, "It is not wrong to go back for that which you have forgotten."

My hope is that this flag, an artifact that can be used to display cultural pride, will serve as a symbolic representation of our past, present and future.