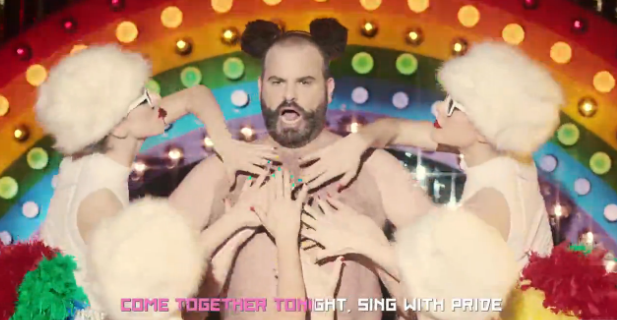 In which we compile all of the inclusive, pro-LGBTQIA+, potentially rainbow-washy (but still more positive than Russia's hateful policies) ads and PSAs in one place.

Canadian Institute of Diversity and Inclusion, getting saucy:

Chevy made a commercial to run during the Olympics devoting a whole two seconds to acknowledging same-sex marriages exist:

Norway's XXL All Sports United Olympic ad spot objectifies a lady, but then WHOA SHE KISSES ANOTHER CONVENTIONALLY ATTRACTIVE LADY:

Britain's Channel 4 won't be left out either.

We thought the Google doodle and accompanying quote from the Olympic charter was a pretty cool move:

“The practice of sport is a human right. Every individual must have the possibility of practicing sport, without discrimination of any kind and in the Olympic spirit, which requires mutual understanding with a spirit of friendship, solidarity and fair play.”

And locally, while there have been no slick commercials that we know of, at least NS provincial legislature and City Hall have raised a flag.

Jury is out on whether or not these are just a chance for businesses to hop on a bandwagon and rainbow-wash their companies cough*CHEVY*cough—who can forget Goldman Sachs' Lloyd Blankfein's quote "equality is just good business"?—or a genuine show of support. While North America is most certainly in a glass house throwing stones here, there is something to be said for genuine support and being a good ally, advocate and friend.