Dig into a swirl of grunge guitars with Soft Spot 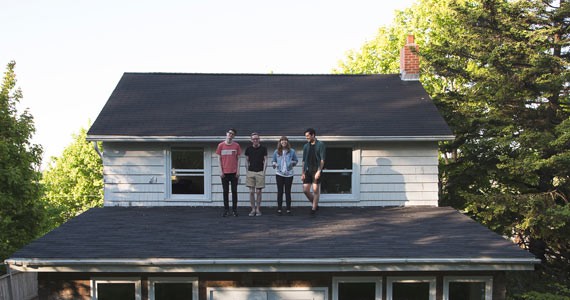 The shoegaze quartet Soft Spot has only been together for a few scant months, with just one piece of recording available for listening at its Bandcamp (softspothfx), but the two minutes of grunge guitars and buried vocals leave the listener wanting more. That wish should be granted in a few more months, the band reports.

"There's two of us that write most of it, everyone's their own boss," says Chew, as everyone---including Tom Burke and Stephanie Muise---laughs. "One person will come up with a riff and we'll go from there. We try not to overthink it I guess. Dumb it down." More laughs.

Non-surprising influences include My Bloody Valentine and The Swirlies, though this new set of songs will be recorded by Luke Mumford---"the Steve Albini of Halifax"---who is best-known for handling punk bands. At this point, Soft Spot is "just for fun, says Chew. "Half of us are students...and half of us are scum." More laughs.