IDOW's Songs of the times

As the music industry shifts and plays catch-up, the In the Dead of Winter sticks to its songwriting roots while redefining the voices and experiences that offer them. 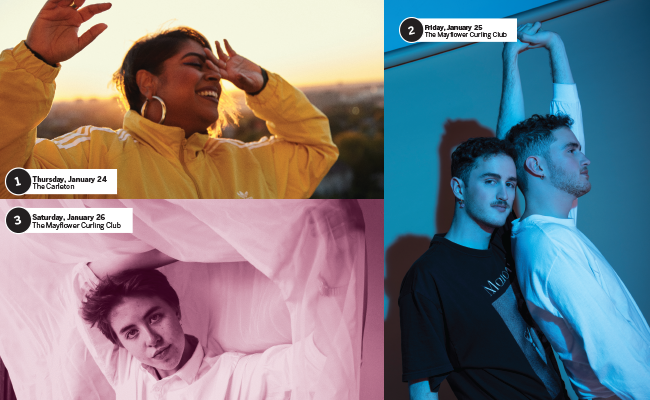 In the Dead of Winter
January 24-26
inthedeadofwinter.com

In hindsight, the birth of the In the Dead of Winter festival in 2006 feels like a perfect storm of talent and timing. Heather Gibson hosted the first event at the Khyber Club on Barrington with Jill Barber, Rose Cousins, Amelia Curran and Jenn Grant—names that now hold an untouchable respect in local music and beyond. It was a festival made by songwriters, for songwriters: A place to celebrate and connect with others over the power of a great song.

The festival shifted north when Gibson opened the venerable (now closed) bar and listening room The Company House with Mary Ann Daye in 2009. For a few years, IDOW settled into something of a comfortable groove around a handful of Gottingen Street venues: Across the street from the Coho, the Bus Stop Theatre and Alteregos hosted intimate performances, forming a triangle of listening-focused stages. Its stages offered opportunities for warm songwriting and togetherness, an ideal balm for January in Halifax.

Dana Beeler remembers those days fondly, reflecting on how that early scene of singer-songwriters inspired her own interest in music. Beeler, now the executive director of IDOW, has spent years working in the scene as a booker, promoter and musician (she currently fronts Hello Delaware). Tending bar at the Company House was her way in—"Amelia Curran hung out there...and all I wanted to do was be Amelia Curran"—and before long she was helping Gibson with work from artist relations to volunteer coordination. In 2016, when Gibson moved to Ottawa and sold The Company House, she left the festival in Beeler's hands.

It can be hard to keep a good thing going, particularly in a place as transient as Halifax: Listeners change their habits, venues come and go, and scenes shift over time. Early IDOW performers like Grant and Cousins have climbed to national acclaim, inspiring a more diverse (if less centralized) scene in their wake; The Company House closed just one year after its sale, leaving a hole in the city's stock of listening-forward venues.

Beeler says that while IDOW has felt those growing pains, her goal has always been to allow the festival to change in positive ways while holding on to what made it special in the first place. Since she took helm of the ship a few years ago, she says, it's become clear that the festival can't stay put while scenes and tastes ebb and flow around it.

Accordingly, this year's lineup captures a festival in transition. For IDOW diehards, there remains a healthy crop of singer-songwriters in intimate, seated venues like Bedouine, Jennah Barry, Gabrielle Papillon and Matthew Byrne.

Many of these artists are a far cry from strummed storytelling with an acoustic guitar. But running through all of them, Beeler sees an appreciation for the craft of songwriting that remains at the heart of what the festival does. "They're all songwriters, they're all writing their own music, they're all writing their own songs, and the lyrical content is still good," she says. "I think that's always been IDOW's thing: Lyrically, you have to have a good song, you have to be a strong songwriter in order for us to pay attention. No one's phoning it in."

What's in a song? Three IDOW artists reflect on what songwriting means to them.

1. APHROSE
"I felt like I was experiencing a full spectrum of emotion—happiness, being married and then also marred by tragedy in life," says Toronto soul singer Aphrose, describing the conditions that pushed her to start writing her own songs three years ago. "I really found writing—writing music, writing songs, writing lyrics, writing melodies—I found it very therapeutic and helpful in processing those experiences."

2. PANSY BOYS
Montreal-based twins Kyle and Joel Curry say that Pansy Boys, the bedroom-pop duo they started together in 2017, has always felt less like an option than an inevitability. For the brothers, writing songs together is a way to explore both the similarities and differences in their close relationship—and a way to celebrate the energy between them.

"Naturally, we always knew that we would have to work together," says Joel. "It just happened as we went along—it was never a question—but it does come with a bit of difficulty at times. Even though we have such similar taste in music and aesthetics, there is obviously a bit of difference especially when it comes to songwriting because we do share different experiences...Mostly we're lucky because we are so similar and we both celebrate each other's creative outlook as much as we can."

Kyle adds having a single musical identity under the name Pansy Boys allows the brothers to find strength in their shared queer identity. Writing songs together gives them space and comfort to express feelings that might otherwise lay dormant.

"We kind of approach music in a cinematic way, so we wanted to make a title for it," he says. "Because our music is kind of lush and soft we liked the image of Pansy Boys because it's idyllic and visual. It's also reclaiming the negative sentiment around femme males—that was really important to us because we knew, as gay twins, that people were going to talk about it anyway, so we decided to to just put it out there right away."

3. RUSSELL LOUDER
"I live in PEI, which is more of a folk, traditional, indie rock kinda scene," says Louder. "So creating electronic music or music that comes from electronic roots in a place like PEI, I feel like I'm constantly trying to stand my ground in terms of recognizing that I am a songwriter, I just use different tools.

"I think a lot of musical purists tend to discredit electronic music because they see the live format of it...but no, that computer is serving as kind of an orchestra in a way. That leads into the craft of what I do—it's become a really useful tool. I feel like songwriting has always been a connection to an instrument for me and now that the computer is starting to turn into that instrument, that's really exciting for me because you can do so much with it. And then in terms of the poetic process of bringing words to the music, that's also something that happens really organically. And it's also starting to feel more and more intuitive the more I do it."