Soul on Ice shows how hockey history misses the net

The documentary, screening at Saint Mary’s this week, sheds light on the unheralded contributions of Black hockey players to Canada’s national sport. 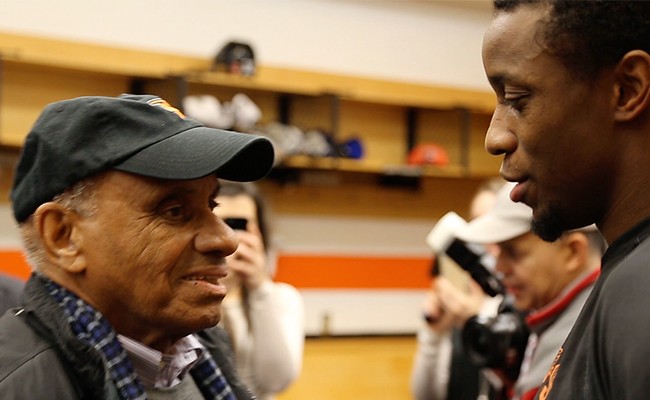 SOULONICEMOVIE.COM
Willie O’Ree, a guest at this week’s panel, and Wayne Simmonds chat

By the time Kwame Damon Mason was six years old, he had already begun to notice how few Black athletes were playing professional hockey. Now, decades later, Mason's documentary Soul on Ice: Past, Present, Future sheds a light on the often overlooked contributions of Black hockey players to the sport.

Looking back on his childhood, Mason remembers kids gathering before the game to choose which player they wanted to be. "I would always pick Guy Lafleur," he says. "And then this one kid said I can't be Lafleur because he's white. It was the first time I thought to myself, 'Well who can I be?'"

Soul on Ice focuses on the story of Jaden Lindo, a young man with hopes of someday playing in the NHL. While documenting this crucial year of Lindo's athletic career, Mason shows how his experiences mirror those of countless Black hockey players throughout history.

Mason released the film in 2015, and says it felt as good as holding his first-born son. "There were many nights I wanted to give up," he says. But with the support of his family and friends he was able to see his hard work come to life on screen. Two years later, he's still receiving requests to screen the doc all over North America, and recently accepted his first request to show it in London, England.

On Thursday, October 12, Soul on Ice will screen at Saint Mary's University's McNally Theatre at 6:30pm as part of an event called Hockey and the Black Experience, which will also feature a documentary short focused on the historic Saint Mary's Huskies hockey line comprised of Bob Dawson, Darrell Maxwell and Percy Paris, who will then participate in a panel along with Mason and NHL diversity ambassador Willie O'Ree.

Paris hopes the event will serve as an eye-opener about the issues that hockey players of African descent face within the sport. When he looks back on the all-Black line he played on, he has mixed feelings. "Even back in the '70s when we did this, it was something that was long overdue," he says. "I wish that it didn't have the significance that it did because of the racism in Nova Scotia."

Paris believes Soul on Ice and similar projects can help to create more awareness about the issues African Canadians are facing, something he feels Nova Scotians aren't succeeding in. "It strikes me as something of a tragic note, that I find myself fighting against the very same things my father fought against," he says. "Things just keep repeating themselves generation after generation. We've made progress, but we still have a long way to go."