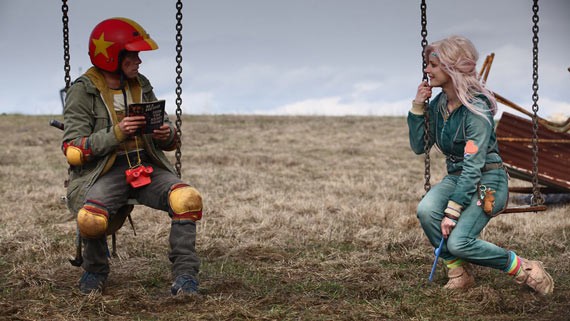 "It feels like a kid just dumped its toys into a sandbox," says Jason Eisener of this summer's most enduring hit, Mad Max: Fury Road. "And Turbo Kid felt like someone dumped their toys into a sandbox—and there were toys from Masters of the Universe, GI Joe and Jem and the Holograms."

Eisener, away from Dartmouth editing the sequel to Goon in Toronto, served as executive producer on Turbo Kid, which takes place in a post-apocalyptic 1997. He likens its '80s vibe to the original Mad Max series out of Australia (plus its Italian rip-offs) and early Nintendo games like Mega Man and Excitebike.

Our hero is The Kid (Munro Chambers, Eli from Degrassi), an orphan trying to survive in a violent wasteland in which water is a precious commodity. He meets Apple (Laurence Lebeouf), a manic pixie dream robot who takes an enthusiastic liking to him—and represents the Jem influence Eisener mentions—and they team up, along with an Aussie cowboy (Aaron Jeffery), to defeat Zeus (Michael Ironside, having a hammy blast). It's cheerfully gory, lovingly reverent and quite batshit.

"It's something I've never read before," says Chambers from Toronto. "It was completely unique in the way that it was such a bloody, sequenced action film, but at the core it was this cute, charming love story. It was really tender at the same time."

The architects of Turbo Kid are what Chambers calls "a three-headed dragon": Siblings Anouk and Yoann-Karl Whissell, and Anouk's husband François Simard, wrote and directed the movie together. Known collectively as Roadkill Superstar, Eisener met the team when he contributed to 2012's The ABC's of Death project. "They're this amazing trio, with so much energy, and so humble," he says.

"Yoann is more for acting, François is there for the camera angles and setups and Anouk is the queen dragon, the queen bee," says Chambers. "She's really quiet but you go to her for answers. It really works because they have the same brain. I don't know if it would work on another set."

The film has a scrappy vibe, following The Kid and Apple on his BMX bike across the dark landscape, periodically engaging in bloody fights featuring inventive, explosive, gory ways to murder people. Ironside in particular is clearly relishing his role as the big bad. Another of Turbo Kid's producers, Anne-Marie Gélinas, introduced Yoann to the actor at a film festival mixer. "She took his hand and introduced him to Michael Ironside and he gave him the pitch there at the party," says Eisener. "Michael said, 'I'm sorry, I've gotta tell you, I'm a born-again Christian.' And Yoann was like, 'Oh.' And then he said, 'I'm just fuckin' with you.'"

Turbo Kid's aesthetic is the key to loving it—the practical effects, the rickety lasers, the geysers of blood, the childhood trinkets sprinkled throughout. "It was this '80s-homage film," says Chambers, "but it was shot like a modern indie film." "It could've been slick and flashy, but I really like how it looks," says Eisener. "It feels more in tune with a childlike mind and spirit."