Piss off with your slacker insouciance, St. Vincent is here to blow you away. 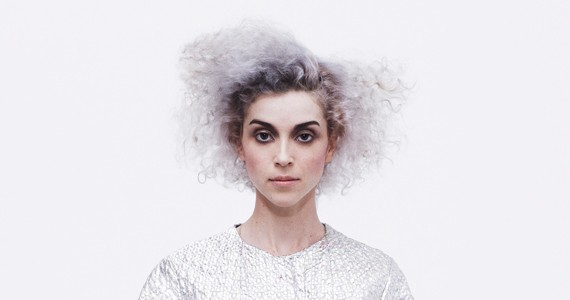 At just past the halfway mark on a year that's boasted the best crop of recordings by women in recent memory—from Sharon Van Etten's Are We There to Angel Olsen's Burn Your Fire For No Witness to Marissa Nadler's July, with Jenny Lewis set to release her first solo album in six years on July 29—the most vital and highest-profile of these was the February release of St. Vincent, the taut and danceable eponymous fourth album by the art-rock chameleon also known as Annie Clark.

On newsstands now is an issue of Rolling Stone in which Clark, 31, is declared "the smartest indie-rock star of her generation." Example: St. Vincent's opener "Rattlesnake," which sets a typically evocative scene over a Casio-demo-style beat, Clark singing in her elastic alto, "Follow the powerlines back from the road/no one around so I take off my clothes/am I the only one in the only world?/See the snake holes dotted in the sand/as if Seurat painted the Rio Grande."

After three records' worth of complex melodies, enigmatic lyrics and elegant, dexterous guitar lines—they are Marry Me, Actor and Strange Mercy—in 2012 Clark made a brass-laden album with David Byrne called Love This Giant, which the pair toured around the world with an eight-piece band, black-and-white colour schemes and much dancing—Byrne marching in place, throwing out mechanical chops and waves, new-wave ninja moves.

For the past six months, Clark has been touring her 90-minute St. Vincent show all over—she lands at the Jazz Fest tent on July 7—and this performance of hers displays a showmanship rarely seen, especially in indie-rock, outside of a pop star's arena: full-band choreography, composed banter, blank-faced robotic guitar-playing, high-end light show, all triggers and cues. (You may have caught a slice of it on the season finale of Saturday Night Live. Public response was decidedly polarized.)

"I'd done the Byrne tour where everyone was very choreographed, except for me—I was not as choreographed and I got a little jealous and wanted in on all that action," she says, sitting 16 floors above King Street in Toronto. "I was kind of reverse-engineering the record to make sure that it could be an energetic live show."

Tonight Clark, dressed all in black on the first day of summer, will headline North By Northeast's outdoor show series, the first name listed on the festival's poster. Her Einstein-inspired fan of white hair is pulled into cornrows, the result of the previous day's photo shoot, which she's keeping for now, "like most of my fashion decisions, borne of sheer laziness," she shrugs.

You'd think this Broadway approach to a rock show might put up a wall, a distance, between the artist and her audience, but Clark, a veteran stage-diver, insists the opposite is true.

"If I know what I'm supposed to be doing in a given moment, then I can fully commit to a performance and be absolutely in the moment. If I'm thinking, 'Should I move my hand,' or 'Should I go here, should I go to this part of the stage?,' I'm out of the performance," she says with conviction. "If I have this map, then I can really exist in the moment, it means I'm"—she claps—"more connected with the audience.

"It is a little bit of a roundabout way to human connection because, for example, I made a conscious choice to speak in second person in the banter. Relying on the premise that people like to be told about who they are. People like to be told about themselves, and also because it allowed me to share really personal details about my life in a way that didn't feel corny," Clark continues. "Like 'Hey you guys, I wrote this song when I was really low'—like yeah, OK, that's fine. Or 'Hey, it's so great to be here.' It goes without saying that it's great to be here, you know what I mean? Let's move past that.

"We're acknowledging the social contract between a performer and an audience, so let's just believe in that. Slacker insouciance is not really my style."

Apocalypse Song (Marry Me): This string-laden observational brings the pain with a soaring chorus and a stomp-clap interlude that deliberately wanders off-time.

Bring Me Your Loves (St. Vincent): Staccato, robotic, sexy and chantable. You will want to bring her everything.

Champagne Year (Strange Mercy): A delicate, spacey ballad: “I make a living telling people what they wanna hear/but I tell you, it’s gonna be a champagne year.”

Outside of Space and Time (Love This Giant): An album’s worth of horn jams ends with this lovely, lilting duet.