Will Robinson is the Killam Library’s inaugural artist-in-resident, and he plans on using the space to the fullest with his kinetic art. 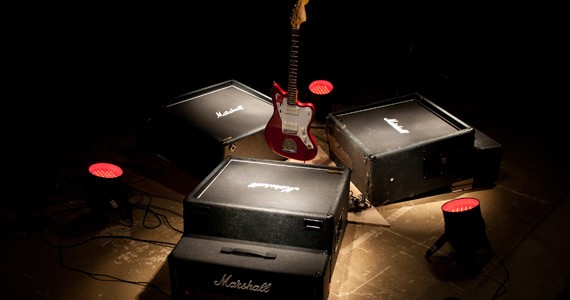 Will Robinson's gone from the halls of NSCAD to the stacks of Dalhousie's Killam Library, a monstrous concrete box of a building he plans on covering in black vinyl and spinning around like a record.

"These are the original plans," he says, bringing up the Killam's blueprints on his laptop. "I might print them all to scale and just start out with maybe a paper model and build up from there."

Robinson is the Killam Library's inaugural artist-in-residence, a spot for which he beat out 36 other applicants by proposing to make a kinetic (moving) sculpture out of the Killam's unique architecture.

"This is the building," Robinson says, holding up his left hand and circling it with his right. "And there's a sensor device orbiting it. The sensor will hit the topography of the [Killam] model and translate that into sound." Robinson recently purchased an ultrasound sensor, though he's not sure it'll be the device he ends up using in order to "play the model like a three-dimensional record."

The piece, with a working title of Brutalist Song, is inspired in part by monoliths: brutalist architecture that makes buildings look like they were carved out of rock (see Fenwick Tower for another example) and Stanley Kubrick's monolith showcase 2001: A Space Odyssey. "The Killam was built within the same few years of 2001's release," Robinson says. He's leaning toward casting his model in black vinyl because "it would resemble the [2001] obelisk in a way."As for the rotating sensor's sound, he's thinking it'll be "a fluctuating tone, like a theremin or something. I don't know what it will actually sound like."

His experiments in sound art began at NSCAD, where one of his first projects was audio of himself taking a bath, "which is really kind of embarrassing," he says, despite assurances to the contrary. "I was always captivated by swimming pools and these kind of everyday environments where if you close your eyes, the sound is pretty otherworldly."

Robinson's past kinetic art includes Let Art Elevate You..., a piece for Nocturne 2012 done in conjunction with physics students from J.L. Ilsley High School in Spryfield, and Nocturne 2011's memorable Young Prayer, which featured a red-lit electric guitar being slowly lowered and raised above the pulpit and later crashing to the ground in a feedback-filled St. Matthew's Church on Barrington.

"I was thinking about rock culture and youth culture and how there's a similarity between the devotional enthusiasm teenagers have for a band they like and the devotion Christians show for god," Robinson says. "I was always intrigued by bands that would smash their equipment, seeing that as some kind of outward physical prayer."

Nancy McPhee, a visual artist and Killam Library intern who was responsible for establishing the residency and was one of the jury members who selected Robinson, is confident Brutalist Song will be a success: "I was happy to bring in an artist who would generate the emotive response and community engagement [Robinson] did with Young Prayer and Parchetypes," his 2011 bagpipes-and-piano-in-the-park project.

Robinson's stay at Killam, a collaboration between Dal Libraries and the Dal Art Gallery with funding from the HRM Residency Initiative, began in January and will conclude at the beginning of March. After that, he'll be heading to Banff, Alberta for a residency involving his Gottingen Street drawing project, in which he'll draw all the buildings between Uniacke Square and the police station.