The story behind where your cafe samosas are coming from. 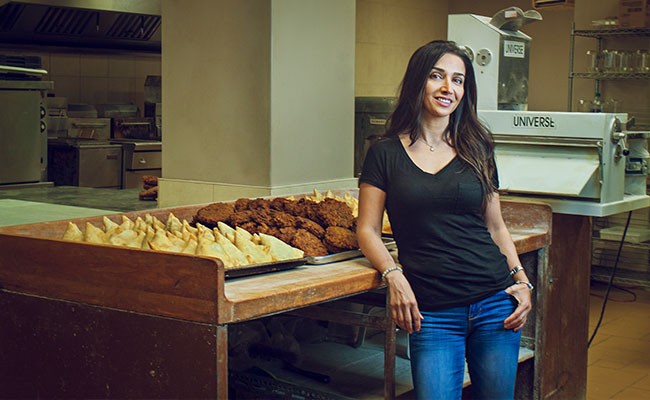 When Fran Shirazi visits a cafe, she's both a customer and salesperson.

"Everywhere I go, every corner store or coffee shop, I ask them if they want to carry our product," she says.

Shirazi moved to Halifax from Tehran in 1994. Ten years later, she bought Staff of Life Health Foods & Bakery. At the time, the company was supplying around 20 customers, selling maybe 200 veggie samosas a day. Today, she estimates they make 10 times that many samosas, delivered to about 80 businesses across the city. Unlike when she bought the company, now shops call her, asking to carry Staff of Life's oversized, deep-fried samosas.

"I bought it and it was so, so hard," she recalls. "Because we were making bread at that time, so I had to wake up at two o'clock at night, go to work until two in the afternoon, and I had two kids so it was absolutely difficult."

Shirazi, whose children were four and seven when she took over Staff of Life, worked alone for the first two years. It was then that she involved her husband Manouch Babaei, who's now the Staff of Life point man, handling customer calls, mixing the secret combination of spices and coming in to make samosas when needed.

"I think if Manouch didn't get involved...," Shirazi trails off. "I'm good in the marketing process but I just can't work like this everyday." She gestures to the workplace around her, which looks like a cross between a grandma's kitchen and an industrial zone. Some of the tables, and a 60-quart standup mixer, were inherited from the Indian couple who started the business in 1973.

Shirazi's marketing strategy was not to have one. She studied math at Saint Mary's University, and says she went into businesses armed only with a good product. She'd go to cafes, leave a sample and offer up free daily delivery and no minimum order. "They were trying and everybody loved it, so I think that's just how it grew bigger and bigger," she says.

The bakery moved to a squat, one-storey building on Maynard Street in 2009. The only indicator of Staff of Life's presence is the thick smell of samosas in the air. Inside, Sajkhi and Golbibi Fazeli are making them with machine-like precision, as they have for over 10 years.

Golbibi Fazeli stands at a hip-height table, thin, semi-circular dough slabs are piled to her right, while a mountain of veggie filling looms to her left. She slaps a piece of dough down and brushes the edges with water, then folds and punches it into a cone-shaped pouch. Into the pouch goes a ball of filling, another punch to stuff it in, then water to seal the last edge. Excess dough is trimmed off and the samosa joins its comrades on a tray, waiting to be fried. The Fazelis, a married couple from Afghanistan, will make 1,500 samosas within a few hours this morning.

The two work in silence. The only sounds are machines humming, the slap of dough on metal and oil bubbling.

The Fazelis were the answer to Shirazi's biggest problem when she took over the business: employees. She used to hire students, who she says wouldn't show up after a weekend of partying, or would flake at the last minute to study for exams. Without dependable workers the business couldn't grow.

Staff of Life now sells five types of samosas, and no longer makes bread. Shirazi came up with the recipes for the chicken, beef, lentil and spinach fillings, "just by Googling." The veggie samosa, unchanged since 1973, remains their biggest seller.

There's another quality of Staff of Life samosas that hasn't changed, and never will—their massive size. "It was this size when we started, and I know it shouldn't be this size," Shirazi says, laughing. "But the people got used to it."

Running a bakery isn't what Shirazi expected to be doing when she moved to Canada. "Hell no!" she exclaims. "But when I see this small business so successful, I'm proud of it. I don't regret it."