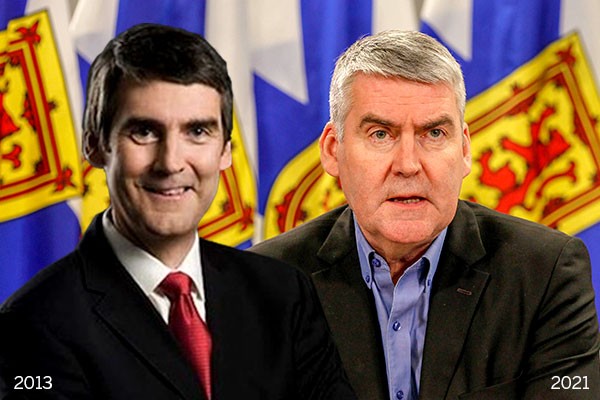 Nova Scotia’s first COVID-19 press conference was held nearly a year ago, on Friday, March 13. It featured Robert Strang, the province’s chief medical officer of health, who was a new but soon-to-be-very-familiar face for many Nova Scotians.

Sitting directly beside Strang (remember a time before physical distancing?) were premier Stephen McNeil, then-health minister Randy Delorey and deputy chief medical officer of health Gaynor Watson-Creed. Reporters were allowed in the room in-person, too, something that hasn’t been the norm since then.

At that debut briefing, just two days before the province’s first three COVID-19 cases were announced, McNeil told Nova Scotians to “do our part to reduce the spread.”

That day, the province’s COVID-19 self-assessment tool was launched, we heard the term “virtual school” for the first time, and public sector employees and children in public school were required to isolate for 14-days after travelling outside Canada. McNeil encouraged the private sector to do the same, but because there was no official state of emergency, it couldn’t be enforced. (A two-week state of emergency came into effect March 22, and has been renewed every two weeks since.)

Over the following 11 months up to and including today, February 19, a total of 97 COVID-19 press conferences have been held by the iconic McNeil-Strang duo. The briefings got into a rhythm mirroring the pace of infections, ranging from six days a week to once every two weeks; currently they happen Tuesdays and Fridays at either 1 or 3pm, give or take. When the vaccine began to get doled out in December, the Tuesday briefings became focused on vaccination data.

McNeil and Strang found their rhythm as well, sitting six feet apart and tag-teaming reporters’ questions with help from moderators Chrissy Matheson and Tina Thibeau, and sign language interpreter Richard Martell. Strang fell into the role of a loveable and knowledgeable father, donning a variety of colourful ties, congratulating us on our successes and reminding us to stay vigilant when cases spiked.

McNeil, on the other hand, became a different type of parental figure, the kind who says, “you’ll get what you get and you won’t get upset.”

Most often, this sentiment was directed at anyone who might dare to question his authority. “Some of you want to make Covid political,” he said during a May 14 presser after an unofficial business re-opening plan had been leaked to media.

And just a few days ago on February 16, he told a CBC reporter he disagreed with them about the results of the Bay Ferries legal decision brought on by the official opposition. “Where I disagree with Mr. Houston–and apparently you—is that you should not be able to dig in and put a company at a disadvantage,” McNeil told the reporter. “And I believe that’s what this does.” McNeil went on to say what he thought would be “factual” to report.

With Nova Scotia’s low COVID-19 case count, the premier’s approval rating sat at 51 percent in August when he announced he was leaving office, according to Angus Reid polls. This is compared to March 2020, when his approval was at just 28 percent before the pandemic began. By December 2020, with McNeil’s departure imminent, it had gone up to 62 percent.

Even after McNeil announced he’d be stepping down to focus on his family and get out of the public eye, he repeatedly ensured reporters he was “still the premier.” But now, with new premier Iain Rankin’s swearing-in set to take place next Tuesday, February 23, the MLA for Annapolis County is losing his podium and megaphone to disparage anyone who questions him.

During his final press conference, McNeil said he’s learned a lot since the early days of the pandemic, giving the example of asymptomatic virus carriers. McNeil thanked Strang for all his expertise and said admitting when he didn’t know something was “the critical thing about this virus.”

If only he thought that way about the other areas of government.