And a new EP on the way! 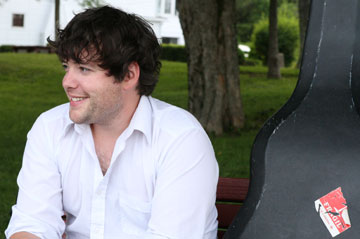 S+H fave Steven Bowers dropped us a line this week to let us know whatup with him for the summer. Last year he got married so he's got a lot to live up to:

"I'm going to be performing with my band (Keith Mullins, Jason Mingo, Kev Corbett) at the Carleton on Thursdays starting this week the 11th and running through Thursday, July 2nd. The shows will start at 10PM each week & will feature some special guest songwriters—Kev will play some of his own tunes this week, Christina Martin will join us for the July 2nd show.

We're doing these shows to work the new songs. I have just finished a six-song EP called Circadian Anthem at Dale Murray's home studio (he produced it; Kelly Sloan, Brian Murray and Christina Martin all guest) and I'm hoping to release it in July."