Steven Cross: called to the bar

It’s possible nobody in town knows the bar scene like Cross— 2 Doors Down’s main mixologist has over 20 years of experience downtown. 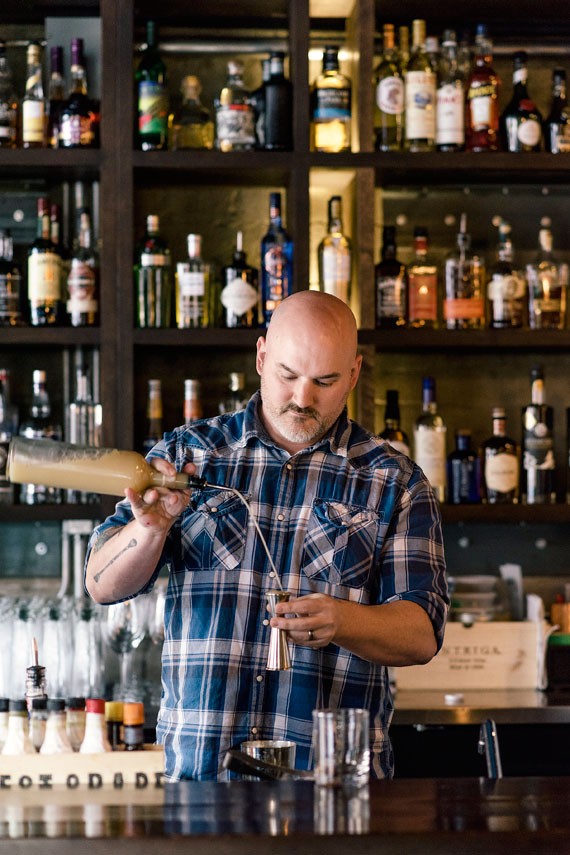 "I started downtown," says Steven Cross, bartender at 2 Doors Down. "I'm one of the old guys. I started in 1993 at the Misty Moon; I was a doorman first. I could list off all the bars: I was at Rogues', the Palace, The Old Triangle. It's a lot."

Anybody who regularly went to a bar in the '90s would probably recognize Cross. "I started working on the bar at the Seahorse, and then I just kind of worked my way up to manager," he says. This was before the place, the basement on Argyle, had the seahorses on the bar, before it had the fish tank—"it was just smoky then," he says, laughing—when there wasn't a lot of tending to do behind the bar. "You were selling beer and rum-and-cokes for the most part," he says. "And to be honest, I worked at a lot of places and that's a lot of what I did. Pubs with pub-style service. A lot of times people were hesitant to take out shaker tins, they were usually pretty dusty. It was all about volume: get out what you can."

While he was working at Tom's Little Havana, around 2010, Cross had what he calls a crisis of faith. He pulled up a stool at Mosaic where his old friend Cooper Tardivel was working. "He and I used to work together at the Alehouse when it first opened," says Cross. "At the time he was really just starting to break out and make a name for himself. He was making all this stuff and doing his own syrups. It came up that I wasn't really feeling it anymore and he just kind of off-handedly said, 'Maybe it's not where you work, it's how you work.'"

Cross knew that he wanted to do more than just pour beer. "And people were starting to ask for drinks anyway," he says. "And customers had more knowledge than I had. So I jumped in with both feet. I could always whip up a martini here and there, but it wasn't until I had that conversation and stated taking my craft seriously and seeing guys that were 10 or 15 years younger than me with so much more knowledge and so much more passion. It ignited my own."