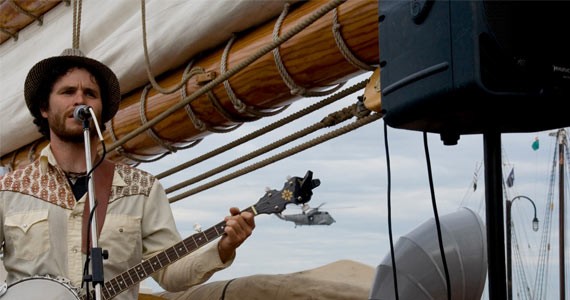 "I was going to do this long-distance kayak trip with my friend, but he died while we were kayaking together," says Zac Crouse, who was diagnosed with Post-Traumatic Stress Disorder as a result of the accident. Afterward, what was originally going to be a film about touring his first solo album You Plan to Do Nothing from Ottawa to Halifax via active transportation took a different turn. "Over the course of production I decided to be more honest," he says. "It's about how I used kayaking, music and physical activity to deal with PTSD." By combining music, film and story-telling in an interactive show, Paddle to the Ocean starts a much-needed conversation about the stigma of mental illness. "Dealing with poor mental health is like having a broken leg you can't talk about," he says. With a full band, key scenes from the film that will screen at the Atlantic Film Festival in the fall, and special guest Tanya Davis, the Halifax release will have you buzzing. "So many people have been sharing their personal stories," says Crouse. "It's wonderful to see people opening up."

Paddle To The Ocean - Trailer from Paddle to the Ocean on Vimeo.