Still vacant after all these years

What’s with the historic empty house at 5517 Spring Garden Road? 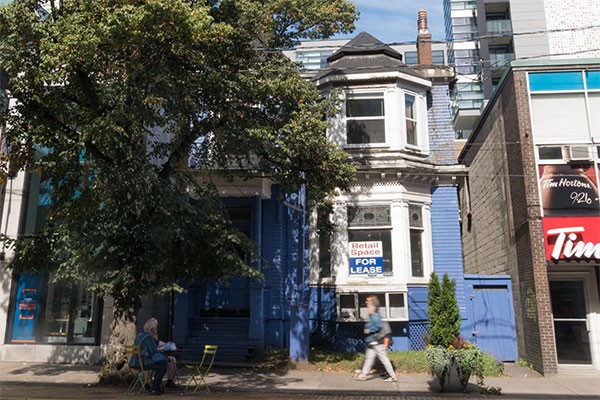 More than 10 years ago, the former executive director of the Spring Garden Area Business Association came up with a plan to try and save the last Victorian house on Halifax’s busiest retail street.

For over 100 years, the residential property has stood among the commercial developments of Spring Garden Road. Its empty shell, covered in chipped purple and blue paint, is a familiar sight to the tens of thousands who walk up and down the street every day. It’s a prime location. So why has it remained empty all these years?

Over a decade ago, the faded residential property was going to be torn down to provide an entrance to City Center Atlantic. Smith, hoping for that tea room, called his contacts at city hall to try and preserve the house.

An offer to buy the property—for three times its assessed value—was made by the neighbouring owners on a Friday, recalls Smith. Come Monday, Smith says, he received a call from property owner Nina Petropolis.

“She said they thought about [selling] over the weekend and changed their minds.”

A “For Rent” sign is still in the window of the unkempt house. Occasionally, someone will sit on the steps, perhaps waiting to catch the next bus. Through the window, one can see the main floor is being used as storage space. A coat-rack in the front entrance holds a sweater and hat, suggesting there are still some signs of life inside.

The house has sat empty for pretty much all of Waye Mason’s adult life.

“I know the owner…did not want to sell the property,” says the city councillor for Halifax South Downtown. When Mason first spoke to Petropolis years ago, she “didn't necessarily feel there [was] anything wrong with the property, but it has degraded significantly these last two seasons.”

In a 2006 article written in The Coast, Petropolis is quoted as saying she wanted to rent out the home for commercial use but was struggling to find tenants who preferred Spring Garden Road to big-box locations like Bayers Lake. Local flower shop Your Mother’s Bloomers was the last long-term retail tenant.

The Coast reached out to Petropolis for this article but hasn’t heard back.

Dawn Sloane, former city councillor for the area, says there have been offers to rent the property back during her time on council, “but whenever anybody inquires Nina has always said no or she wanted more money for it.”

Even if someone wanted to rent the space now it would need repair and maintenance, says Sloane. You just can't move into a place that's falling apart.

“She doesn't want to rent it. When you asked her about the money—you know, like are you putting money into it or whatever—she says, ‘I will if I get a serious offer,’ kind of thing.”

Halifax spokesperson Nick Ritcey says via email that “the property owner has complied each time” to bring the property back up to acceptable standards.

Otherwise, nothing else has changed.

“If there's a way to save it, that would be great,” says Mason. “I think economically it's going to be very hard to save and I expect the taxes on that property because of the development rights on that property are quite high...I'm not sure what the future holds, but certainly just letting it continue to degrade and degrade, I don't think that that can be supported.”

“It had been the family home.” The memories in that house likely drown out any worries about its lack of use, he suggests.

“You will somehow placate your critical side in order to enjoy the positives. And Nina can remember, I'm sure, a happy childhood in that house. That house is special to her.”