Monsoon Café tosses up a mixed bag, but with some work and selective ordering, might just succeed. Melissa Buote leans into the wind. 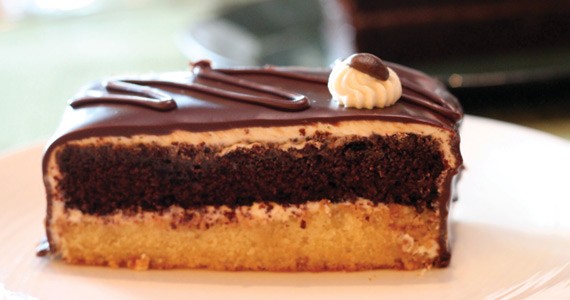 Monsoon Cafe tosses up a mixed bag, but with some work and selective ordering, might just succeed. Melissa Buote leans into the wind.

Monsoon Cafe, I heard, is worth the trip to Clayton Park. "Get there early," I was told, "they can run out of stuff if they're busy." It's early on a Saturday when I head there for brunch with Rebecca and Mark.

There is only one person in the restaurant when we arrive---the server behind the counter. She smiles when we enter and tells us she'll be with us in a minute. (It's only when we leave, after 1pm, that a few other customers wander in.)

We grab a seat at one of the tables near the window. The restaurant has a sunny interior---bright yellow, orange and green walls, big chairs with a wicker weave, a small water feature in a corner with some tall dried grass. There are brightly chalked menus written on the wall near the cash register and some laminated cards tucked into little vases on the tables.

The soup comes first, served in simple bowls set on large triangular plates, with a couple of thin slices of toasted, buttered baguette. The plating is awkward and our server spills soup trying to put them down.

While the taste is bang-on and there is a pleasant hum of peppery heat in the flavourful broth, the soup is not very hot and quite insubstantial. For $3.99 a cup, we expect something a little more hearty; I can't imagine someone being satisfied paying $5.99 for the meal-sized portion with only a sediment of rice and mustard seeds and a few pieces of onion in the bottom of the bowl.

Unlike the soup, the entrees are plated very simply, sandwiches and kothu roti sitting on ungarnished plates.

The banh mi is a disappointment. It's a sandwich that seems like it was called a banh mi simply because it has cilantro on it. The bread is awful---it's a doughy whole-wheat sub bun, closer to a hot dog bun than a Vietnamese baguette. I've rhapsodized about banh mi baguettes in this column before, and don't feel the need to again, but this was truly a bready failure. The satay sauce is bland, and while the slivers of carrots, cucumber and cilantro are bright and tasty, I wish for pickled daikon.

The Manchurian gobi is much better. The paratha is flaky and the cauliflower fritters are very flavourful, the masala hitting gentle sweet, hot and sour notes. Raw carrot and red onion give a crispy texture contrast and the light touch of fresh cilantro is quite nice.

Unfamiliar with the dish, we all expected the roti to be a wrap, but it turns out that a kothu roti is a platter with the chicken and roti chopped up and mixed, almost like a curry stir-fry. The sauce has a spicy depth that gets better as you eat it; it's tasty.

Our server is very friendly, checking in a few times to make sure we're happy with our food and offer water. She also steers us toward the counter with baked goods to check out the homemade desserts, which she showers with praise. We decide to split up slices of the chocolate truffle cake, carrot cake and their specialty---the Monsoon cake. The cakes are all underwhelming, each tasting more like cake mix than homemade. The only thing that seems to differentiate the truffle cake and Monsoon cake is a vanilla layer and a different flavour of blandly sugary royal icing. They are ok, but ultimately we're left a bit disappointed.

A little bit of tweaking and this could be a really great cafe. As it is, it's definitely a welcome spot in Clayton Park and worth the trip to check it out.