Struggle for equal rights at Dalhousie goes back decades 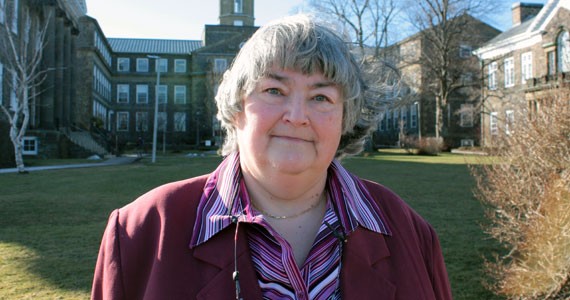 The Dalhousie dentistry scandal has dominated local headlines for more than a month. The public has reacted with fury to sexist and homophobic remarks by fourth-year dentistry students, and references to faculty showing students a video of women in bikinis to wake up male students. All this has been compounded by the university’s messy—and at times misleading—response to it all.

As we digest these events, we shouldn’t think of them as a one-time thing, says a retired Dalhousie professor with experience fighting for equal rights.

“The patterns we’re seeing now are not an isolated event,” says Jennifer Bankier, who retired from her gig as a law professor in 2009. “It’s not a case of a university with a good record that has suddenly lost its sense of balance or sense of proportion about equity and discrimination—it’s a university doing openly the patterns that it did covertly before.”

Initially Dalhousie announced female dentistry students had chosen to take part in a restorative justice process, but it turned out not all of them were consulted, and some of them felt pressured into the process. Dalhousie has stuck with restorative justice, though. Now University of Ottawa professor Constance Backhouse is leading an independent investigation into not only the Facebook group, but also the entire dentistry faculty.

On December 21, four professors raised concerns about the school’s policies in a formal complaint. At a panel discussion two weeks ago, one of the four professors, Francoise Baylis, said, “One of the problems with our sexual assault policy at Dalhousie, which we will have to address, is that it requires a complainant to come forward and be identified, and the question we are asking is: when you have evidence, why should anyone have to attach themself to the complaint?”

Jennifer Bankier became a member of Dalhousie’s employment equity committee in 1993 and was there for more than a decade. While on the committee she pushed for improvements to the school’s sexual harassment policy and advocated for an effective discrimination complaint process. She provided letters to The Coast that detail her attempts to push for better policies. Today Dalhousie has a discrimination complaint policy in accordance with the Nova Scotia Human Rights Act, but that wasn’t always the case, and she says the university didn’t take her critiques seriously at the time.

Dalhousie began looking into employment equity in 1981, and introduced an affirmative action program for women in 1984. Bankier’s letters, which span the decade between 1993 and 2003, mostly relate to a federal contractors program review of Dal’s equity policies. In these letters, Bankier describes in detail and at length why Dalhousie’s discrimination complaint mechanism didn’t work at the time, and how it would “dead end” complaints.

“White departmental majorities and/or union leaders will wreck the relevant grievances before they go to hearing at the arbitration stage,” she warns in one 2001 letter.

Bankier refers to a “revolving door” of visible minority staff at Dalhousie, and says in a 2000 letter that a coalition of black and First Nations faculty and staff described a “poisoned environment” at the university. “They claim that some have left and others will be forced to leave,” she writes.

In a 1993 letter, she refers to “nasty” arguments between law students of different racial backgrounds, and describes barriers for women of colour and white women who try to move up the ranks at Dal. In a 1998 letter she says there is “strong resistance to employment equity” in some faculties, and refers to “student discrimination against equity seeking groups.” Over a number of years she calls on the university to implement “a truly independent mechanism for processing complaints of discrimination.”

Bankier’s memos aren’t the only claims of discrimination at the university. A 1998 study by then-third-year medical school student Gaynor Watson found racial stereotypes in the medical faculty curriculum and racist comments by professors. According to the Canadian Medical Association Journal, in one case a faculty member told students he tested a teenager’s blood alcohol level because she had been in a car “with four black guys.”

Watson also found students and faculty had no mechanism for dealing with racism. Her report recommended a campus-wide policy on race relations, support services for visible minority students and training for faculty, the CMAJ article states.

More recently, in 2009, former Dalhousie English professor Anthony Stewart wrote a book, You Must Be a Basketball Player, about his experiences with discrimination at Dalhousie. Reached by email, Stewart says the dentistry scandal and the issues Bankier raised in her letters don’t surprise him at all.

“When I heard about the controversy in the dentistry school I said to several people that this is the chickens coming home to roost,” he says. “An institution that has demonstrated a lack of commitment to issues of social justice in general is going to reveal that lack of commitment in numerous particular ways.

“Remember, I was a full professor when I left Dalhousie, and left the year I was scheduled to take a full-year sabbatical. How badly must I have been feeling about the place for me to leave under such circumstances?” he asks. Stewart never launched a formal discrimination complaint at Dalhousie because he “couldn’t see anything that would have come of it.”

When I interviewed Stewart about his book in 2009, he said, “If you major in English, history or philosophy at this university, among the full-time professors, the only professor you’re going to get who’s a person of colour is me.”

According to Bankier’s documents, in the 1998-99 academic year 98 78 percent of full professors were white, able-bodied men. She also found a disproportionate staffing of equity-seeking groups—visible minorities, people who are disabled, and women—in lower-status versus higher-status jobs at Dal.

Unfortunately, Bankier’s letters and allegations are one-sided. The Coast reached out to Dalhousie for comment for this story. Dal communications emphasized that the behaviour in relation to the dentistry student Facebook group is “completely unacceptable” and there must be consequences based on a just process.

On January 9, president Richard Florizone stated, “We also realize that this issue on our own campus is part of a larger societal issue that has touched our community to its core and stimulated important conversation and debate that must continue.”

Bankier is glad to see issues of discrimination at Dalhousie are finally being debated. “The difference is that this time it’s out in the open where everyone can see it.”

“No more rug-sweeping,” she says. “We need to do better.”

Full disclosure: The author’s parents are both faculty members at Dalhousie.