Student-led campout put divestment back on the table at Dalhousie

There are no more excuses, Dal. It’s time to divest. 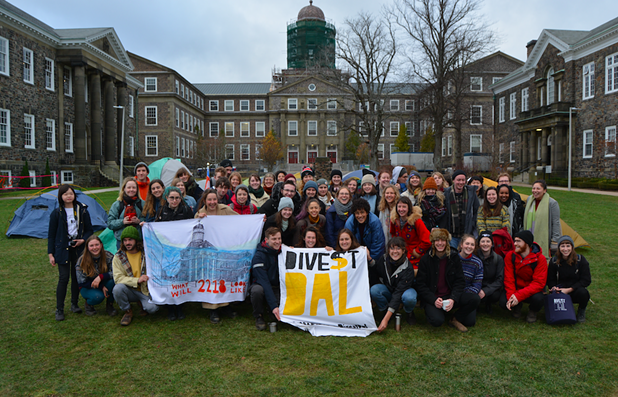 A few days ago I addressed the Dalhousie board of governors on an issue that hasn’t been discussed in that room for three years: fossil fuel divestment. Students made it impossible for the university to ignore the issue any longer by staging a week-long campout on the quad in front of the iconic Henry Hicks building—where Dalhousie's president's office is.

If you haven’t heard of Divest Dal, we’re a student-led group that has been advocating for Dalhousie University to divest from the world’s biggest oil, gas and coal companies: the main drivers of the climate crisis.

It now stands that 16 of the 17 hottest years on record have happened since 2000—which also so happens to be the birth year of Dalhousie’s freshmen who start in 2018.

With global warming approaching one degree Celsius above pre-industrial averages, we are already seeing the toll of climate-change fuelled events. Harvey, Irma, Jose, Ophelia and Maria: the names of hurricanes barrelling down on coastal communities. Or 861: the number of fires sparked this year in the forests of British Columbia. These disasters are increasing in frequency and severity and are not-so-gentle reminders of the toll of a fossil-fuelled world.

It’s the people who’ve done the least to cause the crisis that are the ones being hit first and worst: Indigenous communities, people of colour, people living on small island nations and northern communities. When we talk about climate change, for these communities we’re talking about survival—the difference between life and death, between having a home or seeking refuge.

Despite this reality, major oil, gas and coal companies have enough carbon to send us on a path of well over five degrees of global warming. Unless we act boldly and swiftly, these companies will burn it.

The good news is that the landmark Paris climate agreement affirms we must stay within 1.5 degrees of global warming if we want to have a shot at a livable climate, and that means we need to keep 85 percent of fossil fuels in the ground.

This reality has investors all over the world thinking about climate change, because in a carbon-constrained world, making a bet on oil, gas and coal is a bad one at best, and there’s data to prove it.

Ask Genus Capital, a Canadian asset management firm that specializes in fossil-free portfolios and whose multi-year research shows that divested funds perform just as well, if not better, than regular ones. Or, ask the 800-plus institutions—including universities, municipalities, pension funds and even the world's largest sovereign wealth fund—who’ve divested a combined $5.5 trillion dollars.

On January 21, 1986, Dalhousie took a stand against the oppressive Apartheid government in South Africa by divesting from companies complicit in the regime. They were urged to do so by the student union, the faculty association and Dalhousie’s senate.

Divestment has the support of the student union, the faculty association and the because we understand that climate change is the issue of our time.

Right now, Richard Florizone and Dalhousie’s board of governors hold the power to stand with the fossil fuel industry or to act boldly for climate justice.

There are no more excuses, Dal. It’s time to divest.