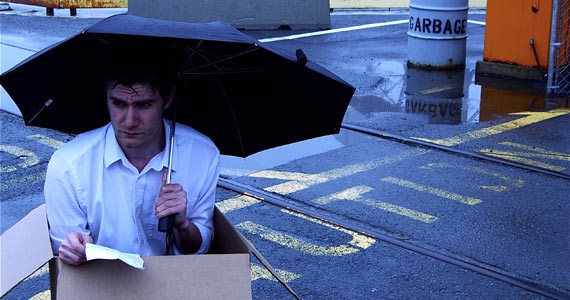 Lewis Wynne-Jones thinks inside the box.

John Beale is writing feverishly at a table at the Coburg Coffee House. The page is covered with chicken scratch splaying out in all directions. Words are underlined. Important items are corralled in boxes as he organizes his thoughts on the upcoming Suitcase Festival. "Welcome to my brain," he says with a laugh. "I'm just making sure I don't forget anything."

It turns out that there's a lot to say about an event that packs seven shows and a trunk-load of cabaret acts into four days. The idea for the festival sprang from Beale's admiration for Seattle's Suitcase Festival and for various clown fests in other cities. He envisioned it as a way to bring theatre artists together and to stage small shows.

"I'm inspired by shows like Daniel MacIvor's House. Shows that are essentially 'built' in the audience's imagination," Beale explains. "The audience isn't given everything, so it's up to the actors and audience to create a world together. It makes for exciting, alive---and even dangerous---theatre."

Beale is quick to point out that the Suitcase Festival is meant to compliment, rather than compete with, the Atlantic Fringe Festival. "I really like the Fringe because it's wide-open and accessible to everyone," he says. "But I saw that there was room in our city for something at the beginning of the annual fringe circuit."

Beale promises that there will be many "added extras" during an evening at The Suitcase Festival, including surprise performances and mini-concerts by well-known musicians. There's also a meet-and-greet brunch at The Bus Stop Theatre on Sunday.

Here's a brief run down of what's on stage:

The Last Words of Duct Shultz by Thaddius Hatte: A funny one-man, multimedia performance about an inept small-time criminal who finds himself stuck in the duct work during a pawn shop robbery gone awry.

Epic Pitch by Mikaela Dyke: Magic, prophecy and a quest all take centre stage in this one-woman play that shows sometimes you need to rely on the kindness of others to find your voice.

Vitorio & other works by Veronique Mackenzie: The local dancer/choreographer brings her childhood memories of the volatile Nureyev to life in her creation of Vitorio Macello, an aging one-time ballet star.

Listless by Lewis Wynne-Jones: A quarter-life crisis propels a young man to revisit familiar objects from his past in order to face the future.

Take it With You by DaPoPo Theatre: With its unconventional take on theatre, DaPoPo will use props galore to encourage the audience to become more connected with art and the life around them.

This is Violet by Courtney Siebring: In this solo tragicomedy performed in mask, reality and dream blur as a lonely and bed-bound Violet idolizes the "perfect life" to the tragically hilarious extreme.

One Day in the Life of Mr. N. by Igor Vlasichev: Billed as "an experimental mono spectacle," this work tells a story of a human who does not have a permanent home.

Cabaret by various artists: Short offerings by performers in disciplines such as dance, clown, burlesque, magic and stand-up comedy will be presented each evening.