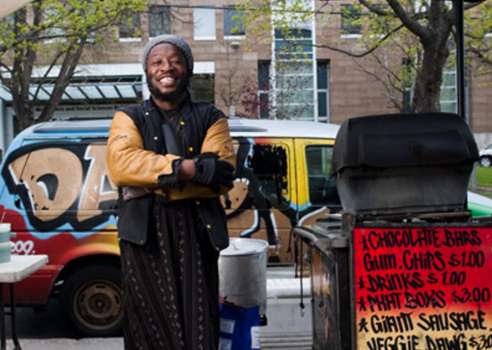 The Supreme Court of Nova Scotia has dismissed a case against the municipality, brought forth by the popular hot dog vendor known as Dawgfather PhD in an effort to stop a proposed bike lane along University Avenue.

Gerald Anthony Reddick, the longtime Dalhousie campus hot dog kingpin who legally changed his named in 2012 to “Dawgfather PhD,” claimed the proposed bike lane would harm his business by forcing him to move his van from where he usually parks in front of the Student Union Building. Reddick argued there had been insufficient public participation in the idea, and applied for a judicial review to quash the bike lane before it was built.

But Justice James L. Chipman’s decision in Dawgfather PHD v. Halifax (Regional Municipality) found instead that Reddick was provided ample opportunity to participate in the planning process, and subsequently dismissed his application.

The decision, released Tuesday afternoon, also notes that the Dawgfather PhD’s regular spot in front of the SUB is clearly marked as a no parking zone.

“There is a sign marking a taxi stand and to the west of this sign, No Parking signs,” Chipman writes.

“Indeed, the photographs make it abundantly clear that the spot where Mr. Reddick normally parks his van on University Avenue is a No Parking zone. Notwithstanding this, the Applicant refused to acknowledge this fact and argued that the signs were ‘not really clear.’”

“Shown a photograph of a No Parking sign with the arrow clearly pointing to the right, Mr. Reddick insisted on saying the arrow was pointing downwards. This was clearly not the case, and in any event, this would lead to a perverse conclusion, i.e., that one is not permitted to park beneath the street.”

The bike lane pilot project was approved by city council a year ago after much debate, but that decision was almost immediately halted by the Dalhousie campus hot dog slinger’s legal action. The project will now finally move forward, meaning that HRM is on something of a roll in terms of protected bike lanes.

In a press release, the Halifax Cycling Coalition said the University Avenue lane will “make it safer and more convenient for people to choose bicycles as a form of transportation.”

The Dawgfather will now have to move his van from its regular spot in front of the SUB, but what impact that will have on his business remains to be seen. On cross-examination Reddick was presented with a tweet he published on May 12, 2015 which informs all those who drink “Hater Aid” and “think the bike lane will close my business” that he “was only fighting for my parking spot.”

Writes Chipman: “Mr. Reddick refused to acknowledge the above tweet pertained to the matter in issue.”

Still, at least it’s not the worst thing the Dawgfather has tweeted.

You can read the full decision below.