How Chelsea Peretti's right hand in the Halifax-shot Spinster is a one-woman revelation. 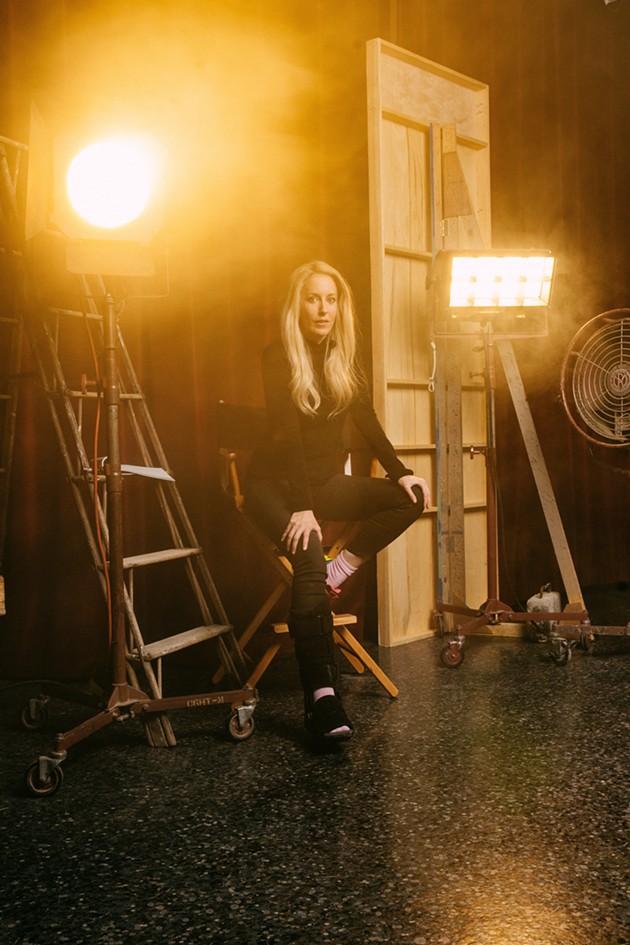 There’s this scene in Spinster—the new, north end-shot dramedy starring Chelsea Peretti—that will play on a loop in a quiet corner of your brain forever. Peretti, as Gaby, the film’s eye-rolling namesake, sits on her apartment couch next to her friend Amanda (played by Halifax’s Susan Kent). They’re having a sleepover, making stilted conversation over dark and stormies.

The camera crops closer and closer, exploring the miniature world between two lifelong friends—a complete universe contained on a single throw blanket. As you sit in the thaw of the old pals reconnecting, Peretti’s co-star and onscreen confidant cuts through the emotional distance in a few quick lines: “I would just love to have a long, uninterrupted conversation—and not talk about my kids,” says Kent’s Amanda, her eyes unable to rest as she speaks.

“OK, but also I don’t want to talk about men,” replies Peretti’s Gaby. “And not talk about getting older,” starts Amanda. “It’s just living longer, what’s that to complain about?” finishes Gaby.

They clink their cocktails together, the remaining emotional distance traversed—but Amanda’s eyes keep looking over at all the things left unsaid.

Maybe you’ll recognize Kent’s long face, flaxen hair and, most of all, the way she says the things you’d be thinking, if you were in her character’s shoes. Where have you seen her before? She’s been breathing fresh air into This Hour Has 22 Minutes since 2012, adding humour for the meme generation to the groundbreaking Canadian sketch show.

Before that, she played Susan on The Trailer Park Boys. In between both, she’s also quickly and quietly made herself an indispensable part of the local indie scene, showing up in everything from the TV series Little Dog to the 2018 film Hopeless Romantic (which, tbh, would be the perfect movie for Gaby and Amanda to watch at their sleepover).

With the arrival of Spinster (it’s being released tomorrow, August 7, on iTunes Canada, AppleTV and Vimeo On Demand), it feels like anyone who hasn’t been paying attention to Kent’s emotional dexterity and crackling wit will be out of excuses.

But as the sleepover scene closes, all this fades into the background. You’re just left with the clouds in Amanda’s eyes as she grips her glass. Maybe you better text your best friend and remind her of all the ways she’s got it figured out. She might need to hear it. 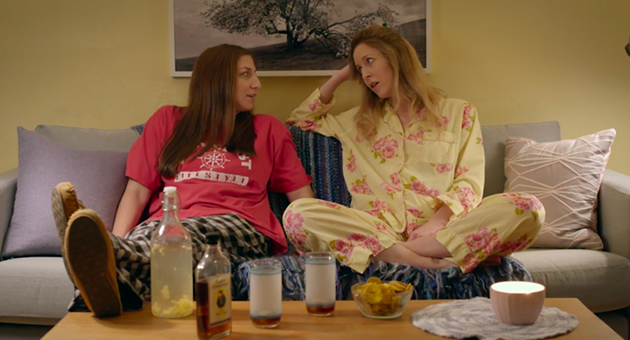 Film still
Peretti and Kent in the sleepover scene of Spinster.

Spinster is, according to its director and story co-creator, Andrea Dorfman, “about a single woman at the dawn of turning 40, who has no kids and is feeling like she’s being left behind in a couple’s world. It’s that moment where she decides to find meaning in her life, no matter what. It follows her on that journey—and hilarity ensues, because it’s Chelsea Peretti.”

It’s also a story about resilience, self-development and friendship.


Dorfman (probably best known for writing and directing the 2014 indie classic Heartbeat) knew from the jump that Kent was the perfect fit for Amanda. “I thought she was great and versatile and she didn’t fit a stereotype; she’s a great character actor and so, when it came to casting the best friend—and who would be a fun, comedic, partner to Chelsea, even though they hadn’t met before; somebody who had comedy chops but also depth and resonance and experience—she came to mind immediately,” the filmmaker says.


This bears remembering when Dorfman is asked her favourite memory of working with Kent—and begins describing that selfsame sleepover scene. “There was something about Susan’s energy that really felt like what she brought to that scene—and I think set a tone that Chelsea followed—was so lovely and about friendship. It was almost as though she led them into a space that had a history between the two of them that felt truly authentic,” Dorfman says. “So for me as a director, I just allowed the camera to roll and that scene to play out and it was just delightful, it was beautiful and it felt real. It’s something Susan brought to the film because she is who she is.”


Later on the same call, Dorfman talks about how Spinster fits within her own thematic canon. “I think at the centre of all my work is that freedom that we find in the self, in the aloneness that we occupy as humans,” she says. All of a sudden, the choice of Kent as Amanda is more understandable than ever: A matching level of self-possessed understanding is mirrored in actor and director, as both halves are always and forever themselves first.


“Iwas like ‘I’ll play the rat that runs through the garbage’ once I knew it was gonna be Chelsea Peretti,” says Susan Kent, her Newfoundland accent still there, even after all these years in Nova Scotia. “I was like ‘I’ll be the tire on the car.’”

Peretti, best known for her role as Gina Linetti in the long-running cop comedy Brooklyn 99, gave Spinster an aura from the moment she signed on as lead. (Other Peretti resume highlights include her 2014 Netflix comedy special, One Of The Greats, and writing credits on Parks & Rec.)

And Kent wasn’t the only one who felt this way when news of the movie—shot over 18 days, mostly around Fuller Terrace—leaked. Local Twitter went nuts, with Haligonians tweeting Peretti to hang out and offering to take her for donairs. It was collectively embarrassing, but also a reminder what a big deal it was to have a star of such magnitude arriving to shoot her first starring role here.


As a city, we’re more than happy to be a footnote on the resume of Peretti as she continues her journey to be the next Amy Poehler or Tina Fey. We’re pleased to be her Ocean Playground throughout Spinster as she takes on an Aubrey Plaza affectation and has a beer at The Seahorse.


Alongside recent success stories like Robert Eggers’ 2019 flick The Lighthouse, Peretti’s descent upon Halifax felt to many like the defibrillator our post-tax-credit film industry needed.


That's a simplified view, of course, but it holds—and it’s also worth holding that, for every jolt given to us by a Chelsea Peretti or a Robert Pattinson, there’s always been the strong-beating pulse of those like Kent, building a scene lucrative enough to draw the big names here in the first place, through their tireless work.


“I want to stay here, because Toronto’s got their people—they don’t need me. I want to make shows here, I want to make work here,” says Kent. “I’m not so worried anymore about being hired in other people’s things—even though I love it and I wanna keep doing that. My main heart’s desire is to make original content here.”

Aaron McKenzie Fraser
"Their friendship is weird and strained and each of their places in life illuminates what’s not working in the other person’s life. They find their way back to the core of their friendship through the film," says Kent of Gaby and Amanda in Spinster.

This isn’t a new sentiment for Kent, who’s really been busy making her own lane this whole time—sometimes inside another’s framework, like at 22 Minutes, where she graduated from writers’ room to co-host on the back of her ability to wrap a headline in pop culture’s clothes. (See her Meghan Trainor parody video that roasts both Harper and Trudeau for a perfect case study.)


It was even present in childhood, when her natural penchant for performance made her find a way onstage, no matter what: “I always thought that I was gonna do ballet, which is a pretty cliche thing—but then I was too tall,” she says. “Probably, also, I wasn't that good. That’s the trick in comedy: You can try all the things but if you’re not good, it’s funnier.”


That soft streak of self-deprecation stays close for as long as Kent is forced to talk about herself. When asked when she knew she was funny, she replies: “Parents always laugh at their kids when they’re small, so I think everyone thinks they’re funny when they’re a kid.” (But making mom laugh and making Canadians coast to coast laugh are two different things. “I don’t worry about whether or not I’m funny anymore. But, I certainly do remember earning first laughs which felt like gettin’ high for the first time,” she replies to this assertion.)


Kent may say she fell into comedy and acting, but she made it her own fast enough that her face never hit the floor.


Once she realized dance was out, she threw herself into comedy and acting at a boarding school on Vancouver Island. Then, it was theatre school in Corner Brook. After graduation, “we started to make our own work and it just was sketch, and it was funny characters and stuff like that,” Kent says, telling how she and her friends created the sketch group Dance Party of Newfoundland.


Soon enough, her big break would crack open. “I never thought I’d be on 22 Minutes—I thought it was way smarter than me,” Kent remembers. She spent a handful of weeks in the writers’ room, what she calls “the most fun place to be because everyone’s brilliant and funny,” before graduating to show performer—making her mark on Canadian comedy with a merciless impression of Celine Dion.


Then, eight years later, came the turn to play Amanda in Spinster. As the film’s second lead, Amanda plays off Gaby, a two-woman baton-toss that keeps raising—and meeting—new stakes. (The duo’s high wire skills really hit in a dinner party scene that feels lifted from a Greta Gerwig movie: When a male guest keeps telling Gaby “you’re going to have regrets, trust me,” Amanda claps back with “You can’t handle a threat to the patriarchy.” And Gaby says “Trust you? Who the fuck are you?”)


Kent says watching Peretti at work was a major inspiration. “She just comes in and controls the room with her performance, and she tries things out and she makes mistakes. It’s always such a relief to see people who are at the top of their game making mistakes and being OK with it.”


“A lot of auditions come across your lap between the ages of 28 and 45 as the sort of ‘got-it-all-together lawyer,’ or the doctor or a lady with a chignon who has the right candles and wears the right heels and skirt to work and always has the right thing to say and I just: Maybe I could try it and maybe I’d be OK, but I just think I’d fucking suck at that,” she adds, remembering with auditable excitement how it felt to be asked to play Amanda in Spinster. Thank god Amanda always has flyaway hair and could never pull off a chignon.