Momoya has its pluses, but doesn’t deliver on the all-important sushi front. 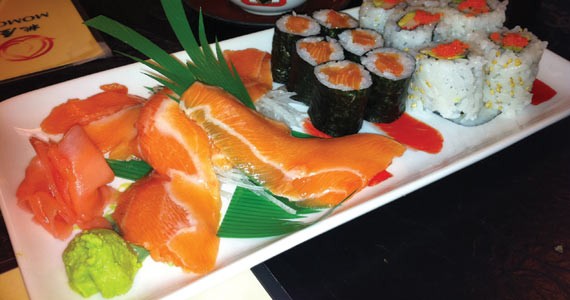 Momoya is a little sushi spot on Barrington Street---one of oldest places in town---I've often walked by, but never ventured into. When I look inside, there are normally a few occupied tables, but this Sunday evening it is empty save for a single diner. It's 5pm and we're greeted by a friendly server and offered our pick of tables.

It's a small establishment. One side of the restaurant is comprised of customer seating with a banquette lining the wall, while the opposite houses the open kitchen. We choose a table in the middle of the banquette. It's a tricky spot to maneuver--- benches on all sides enclose the table and I have to climb over them to get to my seat against the wall. There are cute little cubbies for our shoes, but with flip-flops on, I decide to spare anyone coming in having to sit next to my bare feet.

Once we settle in, I get to work checking out our surroundings. I sit with my back to the wall and face the open kitchen. In this particular setting, I'm not a big fan of the open concept. I think Momoya could do with a renovation, or at least a good deep clean, so I decide to direct my focus to the menu instead.

The menu is fairly extensive so we take awhile trying to make a decision. Whenever I try a new-to-me sushi spot, I stick to old favourites, so we start with an appetizer of mixed tempura ($8). When the server takes our drink order, my friend wants a Sapporo, but at the steep price of $11.50, he settles on a bottle of Keith's for $4.50. It's a chilly evening and I'm in the mood for a hot drink so I order a brown rice tea. The tea arrives in a nice-sized pot that allows me to refill my cup several times. It's lovely; with a deep roasted nut aroma, the tea is earthy and slightly sweet.

Our appetizer arrives and we place the order for our next dish---a salmon sashimi platter with four pieces of salmon sashimi, six California rolls and six salmon rolls. We also order a seaweed salad ($5), as it's one of my favourites. The tempura is good; with two pieces each of shrimp, sweet potato, green beans and a token piece of zucchini, it's a nice plate. The batter is thicker than those I'm used too, but still has a great crunch and isn't too greasy---even the green beans are still crisp within their deep fried shell.

The salmon sashimi platter is a big meal and comes with miso soup and house salad. The salads and soup arrive first. The seaweed salad is great---with a touch of sesame and soy, it's light and refreshing. The house salad is the standard sushi-house fare: iceberg lettuce, carrots, cucumber and corn in a cream-based dressing. It's alright. The miso soup throws me off right away; a purist when it comes to this dish, I'm not a fan of the additional carrots, corn kernels and pieces of soybean paper. The flavour is right, though, and it maintains that familiar salty bite.

The salmon platter arrives and it's disappointing. With fairly standard sushi fare, I think it's a pretty safe bet, but with one bite of the sashimi, I'm immediately deflated. It's practically tasteless and has an unpleasant chewy texture. The rolls are equally forgettable, but we surmise that might be due to the fact that we generally opt for adventurous rolls in more familiar settings.

We could order dessert, but we're just not feeling it. At this point, our feelings are leaning to the un-enthused side, so we decide to call it a night. Though Momoya has a touch of sparkle with a couple items, it just doesn't shine in the sushi department---and when items, which are supposed to be the focus, lack lustre, I'll likely go elsewhere.