Wave Tacos first began in May, delivering family-style taco kits for people to assemble themselves at home during the pandemic. “We did our first round of deliveries to just like, friends and families on Cinco de Mayo,” says co-owner and chef Oscar Hood.

Since that first round of deliveries, Wave Tacos hasn’t slowed down. Hood says he saw a need for delivery tacos and he decided to fill the gap. “At the time, most restaurants were shut down completely to do delivery service,” he says.

Hood and his girlfriend Amber Courchesne run the pop-up together, but say they never expected it to be this huge. Within a week of starting, they were close to 500 followers on Instagram. “It just got bigger and bigger. It was a hobby kind of for us, it was just for us to find something productive to do with our time during quarantine,” Courchesne says.

Courchesne—who worked at a school as a science teacher and as a bartender at the Seahorse Tavern pre-COVID—says the pandemic affected her employment. “So this has been really great for me especially to just sort of get some sort of income and be able to support ourselves through the pandemic,” she says.

Hood, on the other hand, has always been a cook. He used to be employed as a chef at Stillwell before the pandemic, but has always wanted to become a business owner. “I don’t want to say it paid off yet,” he says. “We’re still growing.”

The couple has had no challenge selling out, making between 400 and 500 tacos every Tuesday at The Local on Gottingen Street. 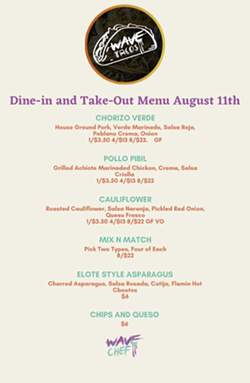 One challenge they do have is the labour-intensive process, since Hood and Courchesne handmake the masa (corn) dough and press the tortillas they use. Courchesne says she focuses on making the dough and the sides, while Hood comes up with the recipes and works on plating.

When the team of two started out making the tacos at home, storage space was an issue. “So, we weren’t really buying groceries because everybody’s groceries were for the tacos,” Courchesne says.

Now, they have a spot at The Local that allows them plenty of space and opportunity to experiment with new recipes. Both co-owners used to work at The Seahorse-Marquee-Local complex, and they’re grateful to The Local for making their kitchen available for community rentals. “It really fosters small business during the pandemic,” Hood says.

Courchesne says they couldn’t have done it without the help. “Them offering us that kitchen and just like having faith in us and trusting us, it really meant a lot for them to give us that,” she says.

Wave Tacos comes up with new menu items weekly. Some of their previous features include tacos like tinga, carnita, picadillo as well as vegetarian and vegan options like asparagus and cauliflower.

Hood says the deep-fried shrimp taco has been his favourite so far. “That one was incredible,” Courchesne says, who’s also a big fan of the sides and desserts they serve. “We do a dessert every other week,” she says. Available sides include chips and queso, dirty rice, tres leches trifle, churro cookies.

With the couple’s affinity for travel, their eventual goal is to own a food truck someday. “I would love to keep this going. Like I would love to have a food truck that we can drive from Nova Scotia back down to Savannah and stop all along the way and spend winter down there and summer here,” Courchesne says.

Once a month, Wave also takes the tips they get and donates them to organizations like the Nova Scotia Black Lives Matter Fund and the Africville Museum. “This week, we’re actually donating our money to put up new basketball nets in the city for all the kids,” Courchesne says.

She encourages people to reach out to them on Instagram to suggest any businesses that may need some support.