Clayton Park may now be the most diverse community in HRM. 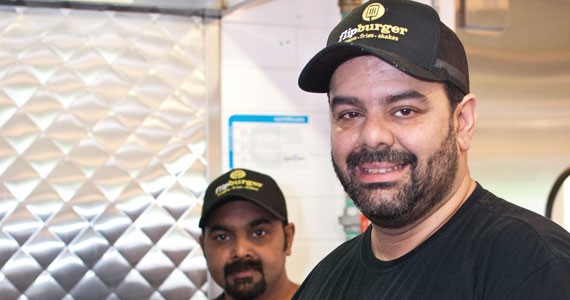 Clayton Park gets a bum rap. It’s true that the neighbourhood began as the epitome of the 1970s-style soulless suburb, and then grew as an apartment complex free-for-all, with no decent plans for parks or transportation. Cue: Joel Plaskett’s “Drunk Teenagers.” But the area has evolved wonderfully, with the library/Canada Games Centre/Mainland Common complex putting the “there” there, and the mixed housing has brought a mixing of peoples, such that Clayton Park may now be the most diverse community in HRM.

Decent eats, deals
Good news! The Lower Deck just opened a brand-new location, bringing the party to Clayton Park. The new place is officially called The Lower Deck Bar & Grill ( 278 Lacewood Drive, 425-1501), and occupies the corner where Winston's Bar used to be. The space was completely renovated, complete with stone walls and portholes in the entrance way. "We tried to replicate as much of the atmosphere, menu and service style as we possibly could," says owner Mike Condy. The only thing missing seems to be the high ceilings. A night out in Clayton Park will deliver the same great bands as you're used to downtown, like Signal Hill, Shameless and McGuinty, Condy promises. With a huge population in need of a good night out much closer to home, the neighbourhood has welcomed the new Lower Deck. Expect a grand opening mid-December.

Brewdebaker's Tap & Grill ( 287 Lacewood Drive, 445-7827) is a family friendly everyman's restaurant that offers the sort of menu representing the middle ground between pub food and fine dining: pasta, salads, wings, ribs. There's also a 100 percent guarantee. "I don't think people should pay for things they don't like," says manager Jude Bartholomew. This lets customers try something new without the risk of wasting money or ruining a night out. Just try not to eat the whole thing before you speak up. Brewdebaker's also participates in food bank drives, accepting canned goods for discounts on your meal.

Moving on from Canadian comfort foods, there are some good choices for Asian cuisine in the area as well. Zen Chinese ( 287 Lacewood Drive, 457-6868) has been around for years serving popular traditional dishes like ginger beef and General Tao chicken and pulling in a crowd during lunch hour. 9 + Nine Chinese Cuisine ( 480 Parkland Drive, 431-7575) on the other hand is a newer restaurant, but bringing in crowds just the same for its celebrated Asian fusion menu, pairing traditional flavours with a dedication to the fresh and local. 9 + Nine sits in a strip of shops---check out the delightfully named Monsoon Cafe ( 480 Parkland Drive, 431-7161) for an Indian fusion experience or Daddy O's Diner ( 480 Parkland Drive, 431-7161).

Laser sharp
Clayton Park is about to become home to one of the biggest lasers in town. An electrolysis laser that is. Jodi Naas worked for Summit Day Spa for 20 years before striking out on her own and starting Ravenrock Electrolysis & Aesthetics (appointment only, 229-7777). "I just wanted to work with newer lasers," says Naas. Her goal is always to have the latest technology, and this one has "all the bells and whistles." Ravenrock will be able to offer more advanced medical aesthetic services, such as hair removal for dark skin colours and suntanned skin. The new laser arrives in December. Until then, Ravenrock offers all the usual services. Additional grooming awaits you at Ritual Tanning & Vibrations Studio ( 480 Parkland Drive, 407-4022).

Speaking of lasers, you'll find lots of them at The Last Gamestore ( 278 Lacewood Drive, 457-7529), which really is the last game store, at least in HRM. Adam Perry opened it in 2004, and business is better than ever, he says. He concentrates on retro video games, e.g. Super Nintendo and Genesis, and an increasing part of the biz is in-store gaming, where folks compete against each other in BlazBlue and Street Fighter.

Now let's poor a smooth glass of beer, brewed with supplies from Noble Grape ( 362 Lacewood Drive, 457-9463), the go-to place for home brewers and wine makers. All the Noble Grape shops have consistently provided good product and service, but the Clayton Park store is by far the busiest. Check out the advanced beer-making supplies, right down to speciality grains and yeasts, as well the spirit and liquor making supplies. Hot right now, says owner Steven Haynes, are the apple and pear cider kits.

Why local: Johnny Demestihas
Looking for a simple bite to eat, but without the poison? Johnny Demestihas opened Flipburger ( 277 Lacewood Drive, 453-3547) with business partner Chris Tzaneteas in June, serving fresh, local burgers without hormones, fillers or preservatives. That means beef and bacon comes from Nova Scotia and produce is sourced as close to home as the seasons will allow. Vegetarians can get a beaner (made with beans and quinoa) or portobello burger.

The local food business has been treating Demestihas well. "It changes people's tune when they hear you're local," says Demestihas, born and raised in Halifax. It's clear he feels good about using local ingredients. Buying from businesses like Stonehearth Bakery is not only fresh, but convenient too.

Demestihas values the interaction he has with customers, and the ability to take in suggestions and tweak the business accordingly. "I literally would talk to customers all the time," he says. He uses an anonymous system to respond to customer feedback via text. It's time-consuming, but he enjoys the interaction, saying the biggest problem with restaurants is that people won't let you know when they have a bad experience. Anonymity solves that problem.

If running a local business has its challenges and its rewards, the same could be said for shopping local. When you take The Coast's Buy Local Challenge this year, don't write off Clayton Park.