Take This Waltz? It's complicated. 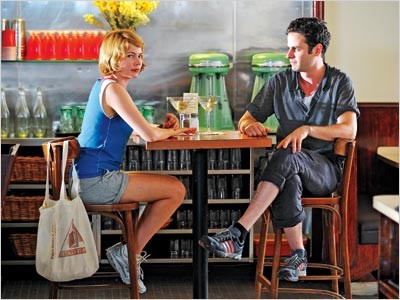 Oh, there's so much I'd like to say about Sarah Polley's new Toronto-shot feature film, Take This Waltz, a story about a neurotic woman (Michelle Williams) in a happy marriage (to Seth Rogen) yet falling in love with another man (Luke Kirby). Unfortunately, I'm hamstrung by the embargo, the request of distributors to not fully review some AFF screenings, including this one, to save the buzz (or slams) for when the picture gets its official theatrical release. To this I call bullshit, because I can already find a passel of reviews online, including this one at the Guardian, this one at Collider and this one at The Hollywood Reporter, all from the screening at the Toronto International Film Festival a week ago. But the AFF isn't TIFF, so I'll curb my natural inclination to gush/vent at a time like this. If you'd like to get a more complete cross-section of my thoughts, ask me when you see me at the fest over the next few days, or wait until it shows up in cinemas. I'll have plenty to say then. I'll just say this much for now: Take This Waltz is beautiful, frustrating, precious, quirky, familiar and ultimately very moving, and it gets more so, in most of those descriptors, as it goes along. And the naturalism and verisimilitude I saw in the film gets more profound with the setting: this film was shot in my old neighbourhood in Toronto, Little Italy and Little Portugal, in mid-summer. So, I cop to my subjectivity on this one, folks. I wandered out of The Oxford after the screening, needing to clear my head and not be with people, so no Telefilm Party for me. But thanks to Telefilm for presenting Take This Waltz, and for the good work you folks do. And thanks to Feist for covering Leonard Cohen with such panache. And finally, thanks to Ms Polley, for eliciting such complicated emotions.