Novel idea, a Canadian film set in a Canadian city that's just about being a person rather than being Canadian. 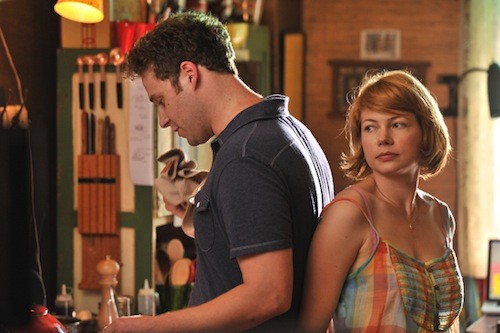 Take This Waltz, written and directed by Sarah Polley (Away From Her), is a peek at what it’s like to be a confused 28-year-old. Margot (Michelle Williams), married to Lou (Seth Rogen), falls in love with her neighbour, Daniel (Luke Kirby), shortly before her fifth wedding anniversary. Margot is a complex and endearing character, who married at a point in her life when she was still unsure of herself—Williams doesn’t act this role, she devours it. The movie’s pacing is deliberately slow and the dialogue often pointed (at times, too much so), but it doesn’t drag. Rogen provides a good mix of comic relief and intensity (he and Williams have chemistry but maintain distance)—and his alcoholic sister, Geraldine (Sarah Silverman), sometimes a moral centerpiece; though deeply flawed, her awareness of herself is more acute than Margot's. It's wonderful to see a Canadian film set in a Canadian city (Toronto) that's just about being a person rather than being Canadian.