When a new relationship goes from dating to meet-my-kid way too quickly. 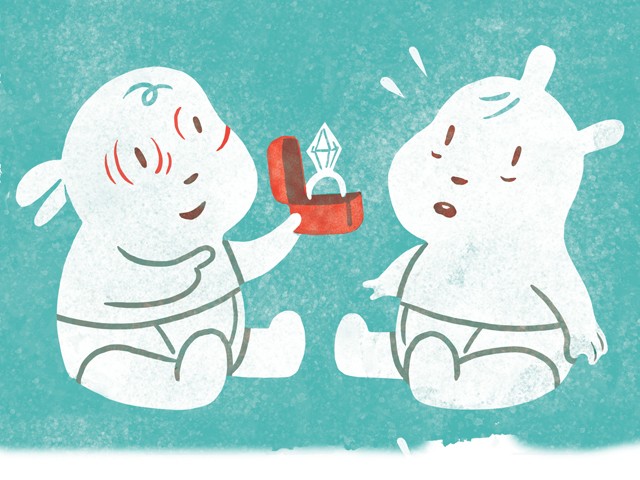 QI'm a straight man who’s been dating a woman for not quite four months. In the beginning things were light. But things started to get heavy quickly. Two weeks in she revealed her very serious abandonment issues, and then began asking me whether I really loved her and demanding reassurance that I wasn’t going anywhere and she wouldn’t be “just a single chapter” in my life.

After a month, I met her seven-year-old son, her parents and her ex. Then we had a pregnancy scare. She told me that if she was pregnant she would keep it because then I would have to stay. That alarmed me. I voiced that we’d been dating for a very short time and this wasn’t a good time for either of us to have a child. She wasn’t pregnant, luckily.

Even before this incident, my body had started to manifest signs of anxiety—upset stomach, sleepless nights, loss of appetite, et cetera. So, I summoned up all of my courage (conversations like this are extremely difficult for me) and told her that I couldn't do this anymore. She started to cry and begged me to give her a second chance. I wound up spending the rest of the weekend at her place and agreed to stay in the relationship. But I didn’t feel good about it.

When I finally got back to my place, I felt anxious, confused, hollow and hopeless. I tried to end things again after speaking to my therapist, but she won't take no for an answer and constantly brings up the promises I made her about really loving her. I hate this and I feel terrible for her son. Any thoughts on how to dismantle this thing? Or do I just need to run?
—Passionate Reassurances Extracted So Soon Undoes Relationship Exit

"Breakups are the only aspect of our romantic lives where the other person's consent is irrelevant. The other person's pain is relevant, of course, and we should be as compassionate and considerate as possible when ending a relationship. (Unless we're talking about dumping an abuser, in which case safety and self-care are all that matters.) But we don't need someone's consent to dump them.”

Voice that it’s over, PRESSURE, and then refuse to get drawn into negotiations about whether it’s over. It’s over. If she needs to cry on someone’s shoulder, she’ll have to call a friend. And if she brings up the promises you made after she “revealed” her abandonment issues weeks into this relationship, apologize for not being strong enough to resist her obvious—if possibly subconscious—efforts to manipulate you. She shouldn’t have asked you to swear your undying love after you’d known each other for such a short time, and you shouldn’t have made the promises you did. You failed her and yourself by not telling her it was too soon for that shit—too soon to say “I love you,” too soon to know whether she would be a chapter in your life, too soon to meet her son (!), her parents (!!) and her ex (!!!).

Again, I don’t think your girlfriend is an abuser, but she weaponized her insecurities (“It’s nice to meet you, now let me tell you about my abandonment issues!”) to extract what amounts to premature commitment from you. And she involved her son in that effort, which is really unconscionable. And while that’s on her, PRESSURE, not you, you should’ve refused to meet her son so quickly and seen her desire to introduce you to him as a red flag.

Learn the lessons, PRESSURE: When someone you’ve only recently started dating says “Will you love me forever?” the correct answer is never “Of course I will!” The correct answer is always “I think you’re a wonderful person and I want to keep seeing you but we can’t know—at this stage—what the future will bring.” If they respond by saying “You know what? You’re right,” keep seeing them. If they respond by melting down and bringing up their abandonment issues, well, they’ve just demonstrated that they aren’t someone you would want a future with.

And finally, I’m #TeamAmanza on the issue of meeting a new partner’s children from a previous relationship. You should be seeing someone for at least six months to a year—you should be well out of the honeymoon phase if not quite into the farting-in-front-of-each-other phase—before being introduced to your new partner’s kid(s).

QI’m a 32-year-old straight man dating a 31-year-old straight woman. We’ve been seeing each other for eight months and became “Facebook official” (if that’s still a thing) in June. We are both in our first serious relationship after being divorced from relatively long marriages. (Me: eight years, two kids. Her: 10 years, no kids.)  My question is, when does suspicion—suspicion of cheating—become something you should bring up?

I tend to spill everything that’s going on in my life, which she says she appreciates but isn’t used to doing. She’s a very independent person, which I’ve never experienced before. It’s refreshing to know that my partner has her own friends, but there are moments when I get stonewalled. Sometimes I get vague answers or no answers about where she is or who she’s with. She often tells me she “accidentally” turned off her notifications. Sometimes she will say she’s staying in and then I later find out that she went out. Maybe I’m taking things way too seriously considering the amount of time we’ve been together, but I feel I have to take things seriously since kids are involved.
—The Absent Girlfriend

Math has never been my strong suit, but assuming her marriage didn’t end five minutes before you met, TAG, your girlfriend married very young. Which means she spent her entire adult life—most or all of her twenties and possibly a chunk of her teens—having to answer to a spouse. She only recently begun to experience the kind of autonomy most of us get to enjoy before we marry and settle down (if we marry and settle down), TAG, and she may be reluctant to surrender that autonomy so shortly after achieving it.

She may also have different ideas about what being Facebook official means. Does that mean you’re monogamous? If it does, does she define monogamy the same way you do? Some other questions: Was going Facebook official your idea or her idea? Did you ask for a premature commitment? You’re only eight months in—is it possible you involved your kids too soon?

You obviously need to have a conversation with your girlfriend—if you can get her on the phone—about your expectations and definitions. If you expect her to let you know where she is at all times and who’s she’s with, TAG, make that clear. But if that is what you expect, well, here’s hoping she dumps you. Because even if you lived together, even if you were married, even if she wanted to spend the rest of her life with you, your girlfriend would still entitled to a little privacy and her autonomy.